The last of Hammer's quartet of caveman pictures, begun with One Million Years BC (1966).  In fact, this is like a repeat of One Million Years BC, just without the dinosaurs (and, therefore, without any stop-motion FX). It's the same director - Don Chaffey - and the same plot, another reworking of the Cain & Abel story: it revolves around two brothers - the blonde good brother and the dark-haired bad brother. The film also utilizes stock footage from One Million Years BC - the cataclysmic earthquake and volcanic eruption - near the beginning. So, whereas the previous film ended with a disaster, in this one the earth shaking prompts the plot forward for the remainder of the film, as a small tribe migrates to better pastures, where the two brothers are soon born. 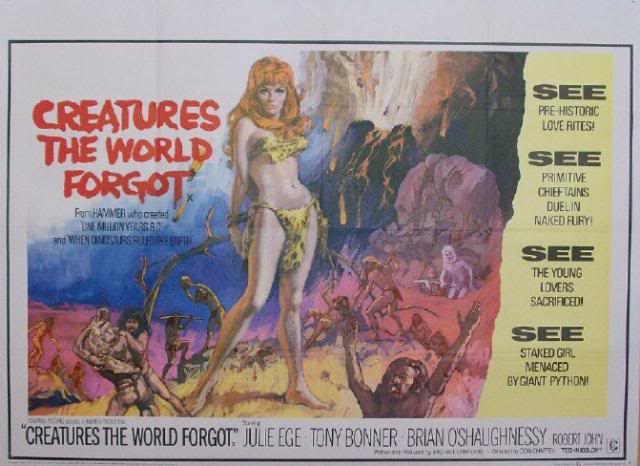 In some ways, since there are no dinosaurs, this is a more realistic depiction of the Stone Age. The story usually demonstrates the violent nature of such an existence, the primitive rituals and ancient mating customs. Julie Ege plays a member of another tribe who eventually ends up with the good blonde brother. This was filmed in Africa and features some local wildlife, though there is also an odd pig-like bear that attacks an enemy caveman in a cave (the animal is obviously a man in a suit). There is no dialog, just brief prehistoric grunts and exclamations. BoG's Score: 6.5 out of 10