This episode introduced the audience to the 2nd bionic man - Barney Miller (later Hiller), a former racecar driver who was also in a terrible accident. Barney (Monte Markham) has 4 bionic limbs, while Steve Austin has only 3 (and a bionic eye). Austin was not aware of him until this episode, when he realizes that his three most trusted confidants (his nurse, Dr. Rudy Wells and Oscar Goldman) are all lying to him about Barney's existence. Things are pushed out into the open after  a now-famous arm-wrestling match in a bar. Barney was 'transformed' as a back-up plan in the event that Austin was incapacitated/killed - it makes sense, as Austin's job can be very dangerous. The problem here, however, is that Barney is in a mental state similar to how Austin was in the original pilot film and he doesn't appear to be coming out of it: he's depressed,  hostile, not adjusting to the new reality and sees himself as an inhuman freak. 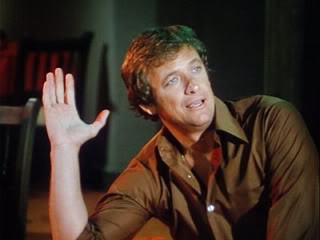 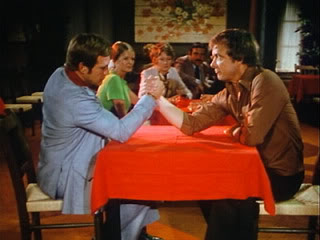 The hope is that Barney's first mission will be a step towards snapping him out of his funk - it's a simple one: Barney simply has to snatch an 800-pound case of plutonium from some bad guys. Austin decides to accompany him on the mission. It works too well - Barney becomes intoxicated with his superhuman abilities, brutalizing the bad guys even when it's unnecessary. He develops a new attitude - selfish, arrogant and perhaps even slightly mad. When Austin suggests that Barney's bionics need to be tuned down to normal human levels, this precipitates the expected bionic clash of supermen. 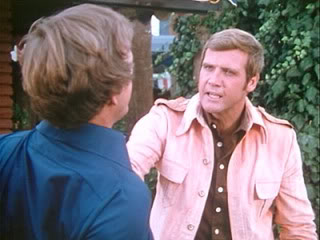 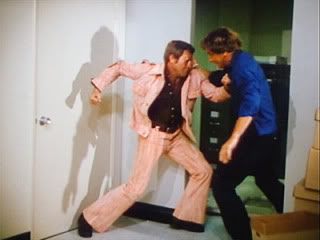 This episode, as was to be expected, is a fan favorite and one of the most memorable ones. It's a classic conception of the super-hero going up against a (probably) even mightier counterpart, or the prototype vs. the new upgraded model. The climactic battle is long and well-choreographed (though one always wonders during such action how the still-human parts of the combatants are not pulped; also, when Barney manhandles the normal criminals, he doesn't seem to be holding back, so they should all be killed twice over). The story also touches upon the secrecy involved in such work at OSI, forcing even close friends to lie to each other. BoG's Score: 7 out of 10 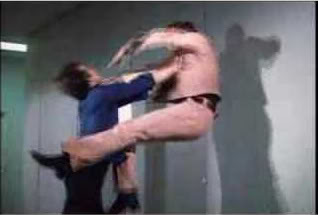 Bionic Trivia: the nurse character in this episode seems to be the same one from the pilot telefilm, but with a different name and a different actress (Maggie Sullivan); apparently, she makes it a habit of falling for bionic patients. Barney's last name was changed to Hiller for his return appearance in the 3rd season (The Bionic Criminal) because of the cop comedy series "Barney Miller" debuting around this time. In both cases, the name changes can be explained away due to the code names used in such top secret work. Actor Markham was the original choice for The Six Million Dollar Man, but some executives thought his eyes too intense and Majors was the final choice.