This is the fateful episode on TNG that revealed the reason for all the similar biped humanoid races spread throughout our galaxy (see, it wasn't just that the production was limited by money and FX capability). Humans, Vulcans, Romulans, Klingons and Cardassians have superficial differences but the same amount of hands, legs and fingers is too much of a coincidence - parallel evolution & development on worlds light years apart strains credibility, what? Also, the giveaway is that they are able to mate and have offspring. So, we get an explanation here. 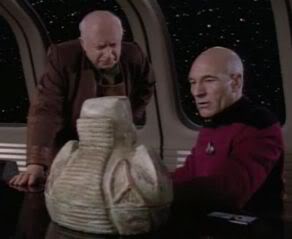 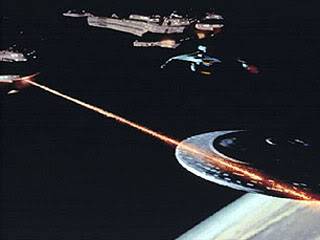 In the plot, Picard gets an unexpected visit from his former teacher/mentor, a preeminent archeologist (this raised other questions for me: when did Picard have time, as a young man, to nearly pursue a career as an archeologist? I thought his one-&-only goal since he had been 17 was to be an explorer for Starfleet). Prof. Galen (Norman Lloyd) presents Picard with an ancient artifact and invites him to accompany him on his greatest expedition. Picard thinks about it but can't leave his career and his ship. Galen leaves in a huff.

Days later, the Enterprise gets a distress call and comes to the aid of Galen, whose shuttlecraft is under attack by some ship; this ship is destroyed but it's too late - Galen dies of wounds. Picard determines to pick up where Galen left off, especially since Galen was really onto something - something important enough for other races to have an intense interest in: Klingon & Cardassian ships now enter 'the Chase.' Picard forms an uneasy alliance with the Klingon & Cardassian captains because each have one part of the secret: DNA fragments collected from different worlds form a code or pattern; when combined, a secret should be revealed. The Klingons & Cardassians, of course, believe this to be a new yet ancient, ultimate weapon, while Picard figures on discovering some new knowledge. Their quest takes them to a final planet where the secret should be revealed; unknown to them, a Romulan ship is also secretly following them. 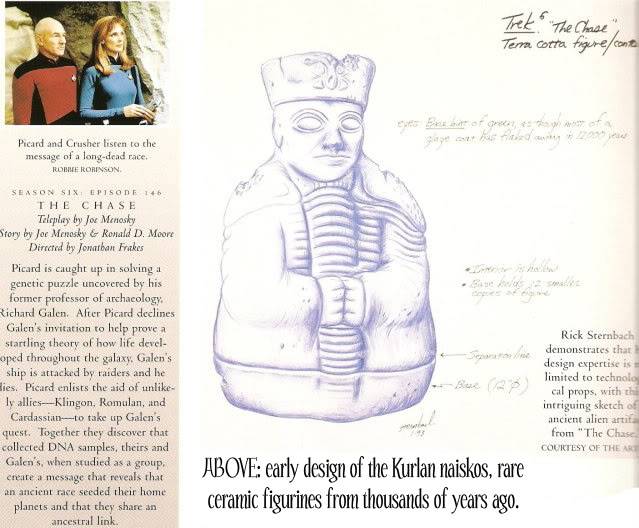 The final reveal is a letdown to some of the participants but is staggering, I would think, to anyone with the slightest interest in origins of the species, the beginnings of life and so forth. When the final DNA fragment is combined with the rest, a holographic image of an ancient humanoid is projected (from Picard's tricorder). This humanoid (Salome Jens) reveals that her race (the voice & figure are female) seeded the primordial seas of many planets billions of years ago. Her race, the first to evolve into intelligent life in this galaxy, realized that their existence - long and thriving as it was - was still destined to cease someday; this was their way to continue the process of life - their legacy (more questions for me: why didn't this advanced race evolve? Why did they just die out? Or did they?). Anyway, this revelation seems obvious now: Humans and Klingons, as an example, sprang from the same seeds and their superficial differences are a result of evolving in different environments.

The implications are even more staggering: without the actions of this ancient humanoid race, there would be no humans, no Klingons, no Vulcans and so on. What kind of galaxy would this be, then? One populated by lizards & insects, maybe? I liked this episode because it does make you think - about how everything begins, about how one action promulgates a vast panorama of repercussions. This is propagation of a people or species on a huge, cosmic scale - yes, it does make you think, unless... you're a Klingon, apparently. 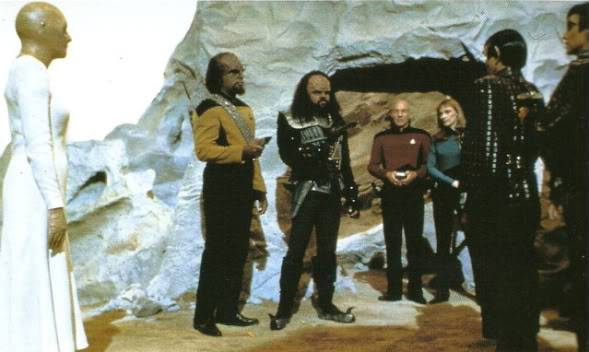 The reactions of the Klingon & Cardassian to this news are amusing; both are stuck in their limited patterns of thought and prejudices, and deny this revelation. They can't expand their minds - not yet, at least. I would think, however, that this episode's events would have a huge impact on 24th-century thinking, among most in the Federation and maybe even among others... like the Romulans, maybe. 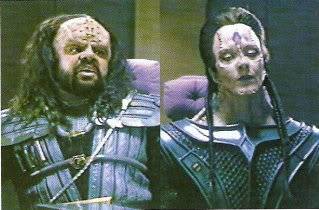 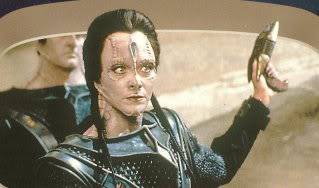 This is where a TNG throws in a little something extra and which separates the show from most other TV series. Picard gets a final communication from one of the 'aliens' involved here, at the end of the episode. It's a subtle little suggestion that perhaps things have forever changed with this new knowledge and places a gratifying cap to the whole story. BoG's Score: 8 out of 10 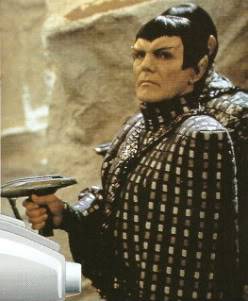 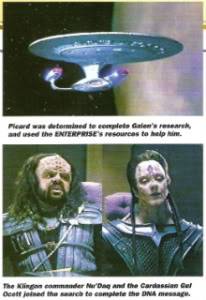 TNG Trivia: this was the first episode to feature humans, Klingons, Romulans & Cardassians in the same scene and the first female Cardassian. This episode does appear to contradict the revelations of the old TOS episode Return to Tomorrow; in that episode from the sixties, surviving members of an ancient race revealed that they spread their seed to various worlds 500,000 years earlier, possibly jumpstarting evolution for humans and Vulcans. There may also be a connection to an ancient race mentioned in TOS - The Preservers.