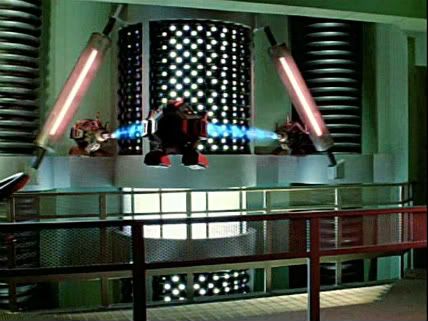 The Enterprise - La Forge specifically - is at a space station to evaluate a new mining technique developed by Dr. Farallon (Ellen Bry). Farallon employs gizmos she calls exocomps, which are essentially small robots who function as quick repair gadgets. The exocomps have small replicator tech built in which allows them to materialize tools as they see fit. More than that, Farallon has designed the exocomps as problem solvers; new circuit pathways are created (replicated) in the exocomps when a new problem is encountered; in essence, the exocomps learn.

As it is, the exocomps have learned a lot... Data's theory, after an explosion, is that the exocomps obtained enough circuit pathways to become self-aware and have a self-preservation instinct. This episode becomes a debate on what constitutes life; Data inquires this of Dr. Crusher and then must overcome the pre-conceptions of the others, enlightened as they may be. Farallon is the one who objects the most; she has her mining project to consider and if exocomps are alive, she can't use them as slave labor. This is the irony: she would prefer that the exocomps be simple tools she created, rather than a new form of life; one would think she would lean more towards the latter possibility - that would be an impressive achievement she had a hand in.

In the final act, a jeopardy situation arises, endangering Picard and La Forge. It boils down to sending the exocomps on a suicide trip without their choice. Data objects to this and defies an order from Riker - a rather unusual scenario. This was pretty interesting - Data's desire (an emotion?) to prove the existence of other artificial life was believable. It seems like creating new forms of life in the 24th century was getting rather easy; however, this may make sense in that the technology used is much more advanced than the present day - maybe, in the future, assembling mechanical forms of life will not be as far fetched. BoG's Score: 7 out of 10

TNG Trivia:
the transporter technician in this episode is named Kelso - a descendant of Lt. Kelso from the TOS episode Where No Man Has Gone Before?