Stand back - it's the return of the Seven Million Dollar Man, Barney Hiller (formerly Miller, played by Monte Markham). Contrary to what was stated in the 2nd season episode about Hiller being permanently tuned down to normal levels, here Oscar Goldman and Dr. Rudy Wells (Alan Oppenheimer in his final take on the character) decide to temporarily tune Hiller back up to superhuman levels so they can run some tests for a couple of days. This actually returns to a premise touched upon way back in the first pilot telefilm, about keeping such bionic soldiers on ice (so to speak) until a dire need arises; then such soldiers would be reactivated like wind up robots and sent to do their thing. There's mention in this episode about the possibility of creating hundreds of such bionic men, a bionic army - this would have made for a fantastic premise in some future film, but the closest we got was the movie Universal Soldier in 1992, with Jean-Claude Van Damme.
At this point, Hiller has married his former nurse, Carla (Maggie Sullivan, also back for an encore) and appears better adjusted; Austin has his reservations. True to form, Hiller loses his temper at a race track, frustrated at not being the top driver he used to be, and seemingly kills the car owner (John Milford). The moment is ripe for a smarmy former employee (Donald Moffat) of OSI to step in and coax Hiller into some armed robbery. It looks like Hiller is doomed to either be a hunted bionic man or a dead one eventually. Inevitably, another clash of the two cyborg-supermen will take place. 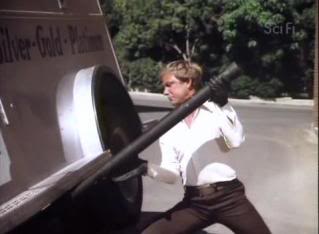 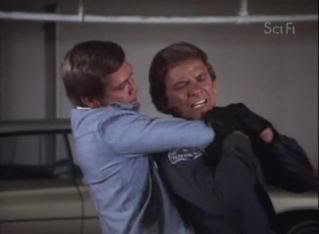 This had the same entertainment value as the first Seven Million Dollar Man episode - it's always extra thrilling to have Austin in the vicinity of a counterpart, just to consider the possibilities; where in almost all other cases Austin is clearly superior - next to normal crooks, for instance - here he will be sorely tested and the outcome is in doubt. Hiller is an interesting alternative to Austin's stalwart hero; he's not a villain, just unsure and slightly neurotic - he is therefore more unpredictable. The ending is too pat and sugary, but it's another exciting duo bionics duel. BoG's Score: 7 out of 10
Bionic Trivia: actor Oppenheimer was brought back this last time to play Wells so that it would match flashback scenes to The Seven Million Dollar Man episode; thereafter, Martin E. Brooks would play Wells.