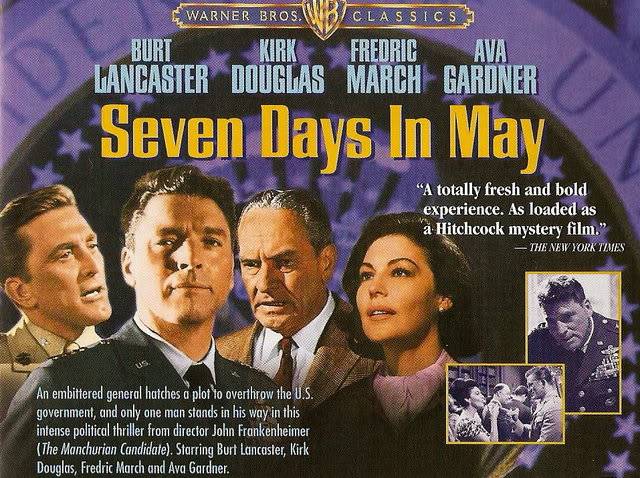 When one thinks of 'political thriller' films, the first name that usually comes up is director John Frankenheimer. SEVEN DAYS IN MAY can be looked upon as a companion piece to his THE MANCHURIAN CANDIDATE (1962). The film also falls into the 'futuristic' category as it takes place in 1970 (the novel upon which it is based takes place in 1974).

Six years in the future is not much, but, hey - it is the future. One indication of this futurism is the use of, essentially, video communications in the film (advancing on plain telephones), which is still not widely used today, except on the internet. 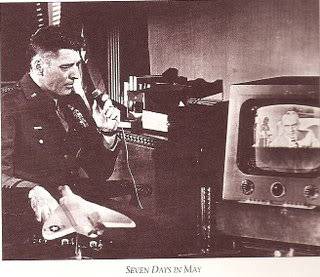 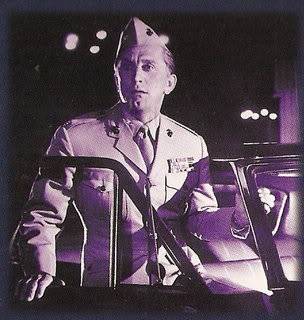 The film focuses on the top leaders of this fictional United States: the President (Fredric March) is about to sign a treaty with the Soviet Union for mutual nuclear disarmament. We quickly become aware that most military leaders in the USA frown on this development. The top military man, General Scott (Burt Lancaster), is Chairman of the Joint Chiefs of Staff. He, it's soon suspected by his aide, Col. Casey (Kirk Douglas), is doing more than just frowning; he is possibly planning the takeover of the U.S. government in a matter of days, on the upcoming Sunday. Casey sets into motion a flurry of events as he decides to approach the President and his staff about his suspicions. The cast is really first rate here. Ava Gardner plays a former mistress of Gen. Scott, a small role. Edmond O'Brien is an alcoholic yet fiercely democratic senator. Martin Balsam is the President's aide. Andrew Duggan is an out-of-the-loop colonel. George Macready is a Presidential adviser. 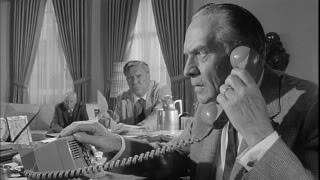 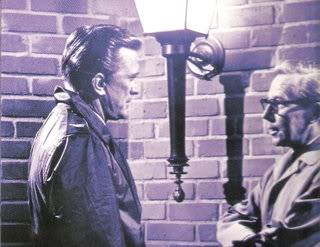 Those on General Scott's side include Whit Bissell as a hawkish senator, Hugh Marlowe as a corrupt newscaster and Richard Anderson as a colonel. In his first acting role, John Houseman is an admiral who declines to partake in Scott's plan but comes across as the most cowardly of the lot. The script was by Rod Serling, well-known now for his Twilight Zone series; indeed, this film resembles a lengthy Zone episode in several places, especially in that scene at the airport, when Duggan's colonel character abruptly disappears. But, the best scenes are the confrontations - these are the ones we wait for: when Col. Casey first speaks to the President, when the President finally confronts General Scott and when Scott & Casey have their final scene. 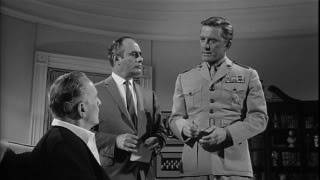 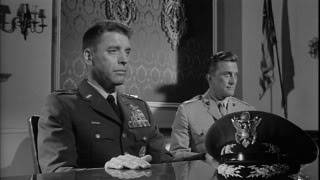 The film is a good example of the conspiracy thriller and the paranoia angle which seemed to play on the fears of many citizens back then (still does, to a degree). Other films released close to the same time were The Best Man, Fail Safe and Dr. Strangelove - all in b&w and all quite dark and very cynical for that age. Why during that time? Well, John F. Kennedy was assassinated a year earlier, we have to remember. After that, it seems like everyone was looking into dark corners and expecting to find unpleasant things there - and not just from the obvious sources, like the evil Soviets. Maybe the enemy was... ourselves. 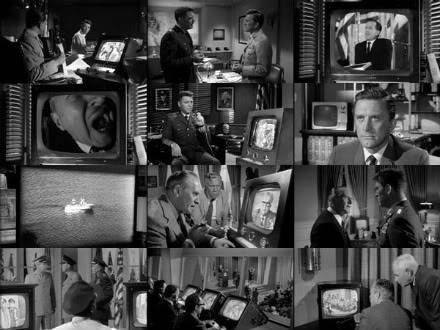 This type of film also invites debate on the dividing line between patriotism and fanaticism. One question some might ask is why, in many such films, a character who espouses a strong national defense is eventually revealed as somewhat maniacal. The formula of these films seems to suggest that right-wing and security-conscious automatically denotes at least partial madness. To Lancaster's credit, his performance doesn't quite step over a line; though March's President does call him a megalomaniac near the end, Lancaster's General is in control of himself,  with just a bit too much ego and too reactionary (and, check out that shot of him standing in front of a group of model rockets or missiles - not very subtle but, boy, does it spell out where he stands!).   The whole film also seems to be a reaction to Eisenhower's warning about the military-industrial complex. BoG's Score: 9 out of 10

Trivia in May: Leonard Nimoy is rumored to have a bit part in this film somewhere. I haven't been able to spot him, unless he's one of two men walking by in the background during an airport scene at the 53-minute mark, but I don't know why he would take the part of basically an extra at this point. It could be that his scene was deleted. There was a poor HBO remake of this film in 1994, titled "The Enemy Within," with Jason Robards in the 'crazy general' role, Sam Waterston as the President and Forest Whitaker as  Colonel Casey.
_______________ 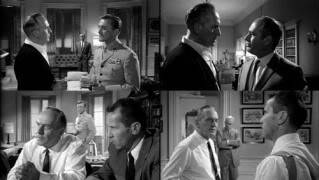