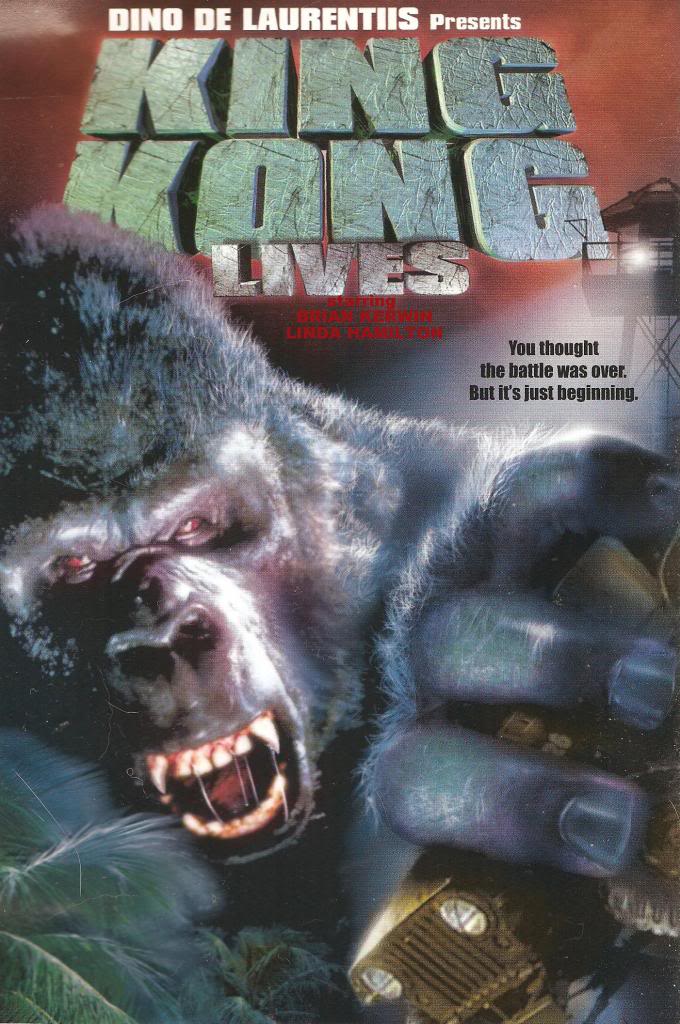 A misguided and unnecessary sequel to the 1976 Kong film, but the first film did make money, so-o-o... inevitable? This replays most of the climax of the '76 film and then reveals that, 10 years later, Kong is still alive, albeit in a coma and in need of an artificial heart. His surgeon (Linda Hamilton) declares that no other animal species can provide the blood necessary during such an operation. Just in time, a female Kong is located in Borneo by an Indiana Jones-type dolt (Brian Kerwin); she is brought down by the local natives, who shoot her with a bunch of drug-tipped spears. Kong gets his operation but, as soon as he awakens, he smells the female Kong and escapes with her (Hamilton warned everyone about this but was of course ignored). The army colonel (John Ashton) assigned to capture them makes it his personal mission in life to destroy them, for whatever reason (it's either his chance to make general or he really hates apes).

Though this film has the same director - John Guillermin - as the first one, it's a more juvenile and inane version. The inanity begins with the faulty premise - that the bullet-riddled Kong would have survived the bone-shattering fall from the top of the World Trade Center. Then we get the dopey lovey-dovey angle of two Kongs, also sparking a romance between the two leads (Hamilton, surprisingly, shows her boobs for half-a-second jumping out of a sleeping bag). Then, of course, we have the clownish and evil military man - he's very upset at one point, for example, that his men are playing jailor to the female Kong and not training; however, most of the characters also behave foolishly or cartoonishly. The story may represent the dichotomy of the human condition, twisted into absurdity: mankind does everything it can to save Kong in the first act, but then spends the rest of the film doing everything it can to destroy him. There's a sense of pointlessness to the whole deal. The FX are not as good as in the first one; they stuck to the man-in-suit approach (without Rick Baker) and, most of the time, the giant gorilla looks 2nd rate. There is an epic battle with the army at the end.  BoG's Score: 5 out of 10

Kong Trivia Lives: Jeff Bridges and Jessica Lange appear in archive footage at the start of the film, repeating scenes from the first film, but do not appear in any new scenes in the remainder of the film.
Star Trek TOS actor alert: in one of the more outrageous scenes, Kong is assaulted by a group of inbred hunters before taking his revenge, among them Leon Rippy and Michael Forest; Forest played Apollo in the episode Who Mourns For Adonais.