Stephen King's take on time travel: during what begins as a routine commercial airline flight from L.A., several passengers who had fallen asleep awaken to find that all other passengers and the crew have disappeared. Fortunately, one of the remaining passengers (David Morse) happens to be a commercial pilot so that solves the dilemma of eventually landing the airplane. Other passengers include a teacher (Patricia Wettig), a writer (Dean Stockwell), a secret agent (Mark Lindsay Chapman), a teen (Christopher Collet), a blind girl with telepathic abilities and a really annoying businessman (Bronson Pinchot) who has embezzled money. Their problems don't end when they land at an east coast airport; there are no people there either and, pretty soon, a strange noise in the distance begins to get louder... 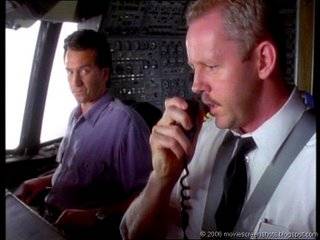 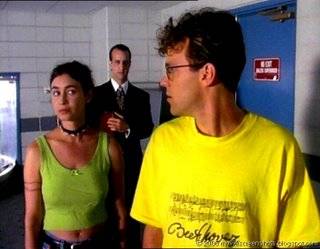 The story here unfolds slowly, like some slowly opening petals of a mysterious flower - it's all a mystery in the first half and the characters very gradually uncover clues and theories on what has happened.  In many ways, it's too slow, and the characters seem to behave in slow motion with their discussions and guesswork, but it's curiously watchable, even compulsively so.  It's eventually revealed that

Spoiler:
the airplane had flown through some sort of time rift in the sky and moved a short time into the past. In this version of time travel into the past, we find that the past is a dead or dying place; people only exist in the present and inanimate objects are rapidly losing their validity; pretty soon, the monsters of the tale will arrive and consume everything so that it truly becomes oblivion.

The main drawback of this TV version of King's story is Pinchot as the loud & squirrely Toomey; he overacts shamelessly - but he's also a prime example of the caricatures that King placed in most of his later works; in this case, he's the weaselly executive, driven batty by daddy issues and money pressures - this is the drawback of a capitalist society in King's eyes.  I got so tired of looking at him and listening to him by the end of the first half-hour that the rest of the 2-part telefilm was a chore to get through when he was on screen.  The other problem (s) are the cartoon-like monsters or title characters - they turn the story into a weird kids' show in the final act.  BoG's Score: 7 out of 10


Langolier Trivia:
as with several filmed King works, Stephen King shows up in a cameo as Toomey's boss in one of Toomey's numerous delusions...