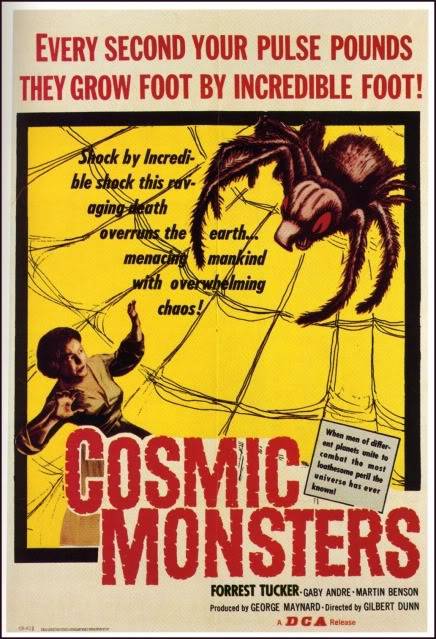 I finally got around to seeing this one during the TCM Sci-Fi marathon on June 9th. This one is British, but stars Forrest Tucker, who also starred in The Trollenberg Terror (a.k.a. The Crawling Eye). I read beforehand that it's talky and indeed it was, for its first hour. There's one amusing early scene when the two scientists are outraged over the prospect of a female replacement (Gaby Andre) for an injured assistant. Later, she solves a power source problem and impresses one of the guys, though the reluctant Tucker is the one she falls for. Actress Andre, btw, had her voice dubbed over. 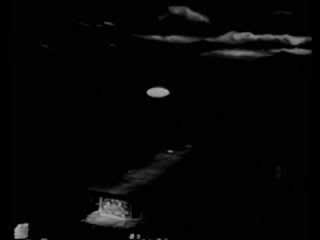 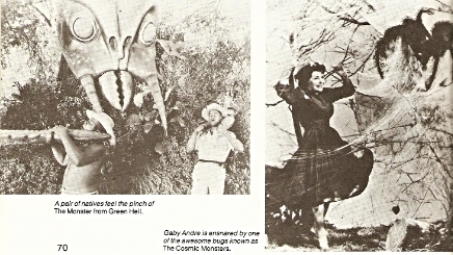 In the plot, the scientists open up some kind of rift with their experiment, allowing cosmic rays to affect the size of insects in the area (mostly some local woods). At least one male character, a local bum, also becomes homicidal due to all this. There's also an alien visitor (played memorably by Martin Benson) who is here to help. He starts out with this sinister goatee, but after a remark from a local girl, he makes the beard disappear. 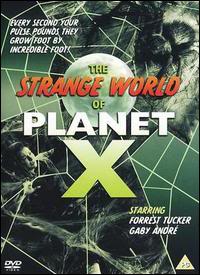 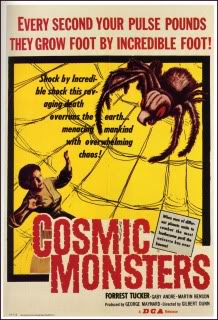 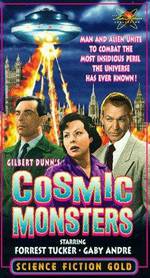 Most of the giant insect action kicks in at the 1-hour mark. These aren't particularly huge insects but they do some grisly work, like chewing off the face of a soldier; the Brits were less restrictive than the USA back in the fifties in showing such graphic scenes. This shot copies from a similar melting face scene in X the Unknown (56) and in his book, Keep Watching the Skies, Bill Warren writes that this film does indeed swipe from the earlier one. The last act is eerie, however, and frightening to some extent, with a couple of the female characters in serious peril. But, it's brief, and the ending is abrupt. BoG's Score: 5 out of 10

THE VERSION BELOW IS THE PLANET X BRIT ONE:
Cosmic Trivia: in the American-titled version, the screen title is "The Cosmic Monster" - singular; but on all the print material, like posters, it's written as "Cosmic Monsters."