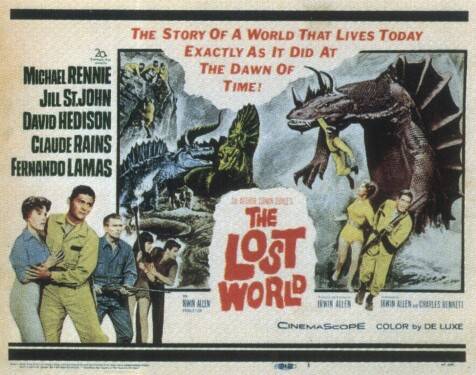 As most agree by this point, this version of the famous Sir Arthur Conan Doyle adventure and remake of the silent 1925 film is a series of missed opportunities. Prominent among the mistakes are the FX involving the so-called dinosaurs: director Irwin Allen chose to skip Harryhausen-type effects and expediently employ real lizards with fins attached. This film also seems to copy the previous year's Journey to the Center of the Earth, but most of the plot and characters come off as cardboard & juvenile. Claude Rains plays Professor Challenger, intended as the exasperated, colorful scientist, but he's tiresome and derivative. Michael Rennie is 1st-billed as the cool big game hunter. David Hedison, fresh off The Fly '58, is the reporter. Jill St. John is the daughter of the financier of the expedition and Rennie's paramour. Fernando Lamas is the local (meaning he lives near the lost plateau) and the probable monkey wrench in the works. 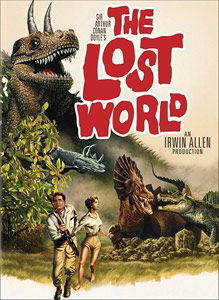 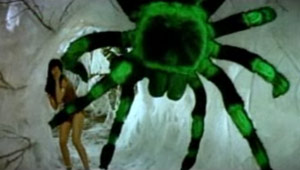 The film starts off slow - introducing all these characters and unveiling the plan to find the dinosaurs - and never really picks up.  It's filled with all these cute little bits, such as  the lady's small dog, aimed at the juvenile market, it seems, and most of the dialog follows suit, never rising above TV family fare.  But, it goes beyond  simple silliness - Challenger, supposedly one of the smartest scientists around, comes off as a fool with his observations of dinosaurs which are obviously common lizards (obvious even to kids watching the movie).  There's also an unfortunate bit of optical FX with a large green tarantula (see pic above). All that said, this is pretty colorful if you're a kid, with some nice matte paintings (huge trees when they first arrive at the lost plateau). The group helicopters in and things go bad the first night when their transport is smashed. From then on, it's a trip just to escape the locale.

Things do become a bit more serious in tone as some tension surfaces amid the group - Rennie & Hedison get into a brief fistfight and Rennie's seemingly strong alpha male turns out to have feet of clay. There's also a hidden hostility stemming from the character played by Lamas. But, instead of focusing on the giant beasts, the story becomes one about the hostile natives of this plateau; these primitives - who resemble Incan Indians - capture the group and are revealed to be cannibals, though nothing is really shown of their savagery. Predictably for a family flic, the good guys and gal survive while the troublemakers are toast. BoG's Score: 5.5 out of 10

Lost Trivia: Allen remade this - sort of - as an episode of his Voyage to the Bottom of the Sea series in the 1st season, Turn Back the Clock, by plugging in stock footage from this film into that episode; the series co-starred David Hedison so it worked pretty well...