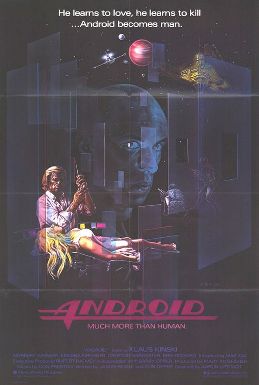 What's Happening: On remote space station, scientist tries to create perfect female android
Famous For: Same year and themes as Blade Runner; Roger Corman co-production
The lively, quirky, surprising Android made no impression at the box office largely because it didn't fit into any neat categories. It still doesn't. Klaus Kinski plays the self-serving scientist, but his role isn't large enough (or "Kinski enough") to make this an art film. Action is never far away, but no laser pistol or spaceship battles are sustained enough to make this an action film. Gore and nudity are too brief to make this an exploitation film. Emphasis is on characters and drama, but such is not what science fiction fans expect. Happily, the film has gathered a cult following over the years. In its own way, it is a low-budget mini-masterpiece: the sort of project on which everyone involved was united and sincere in their efforts. The closest analogue I can think of is Creation of the Humanoids, but that film has a nostalgic mood, whereas Android still feels modern 30 years after initial release. 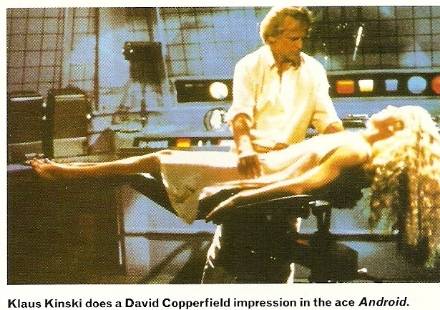 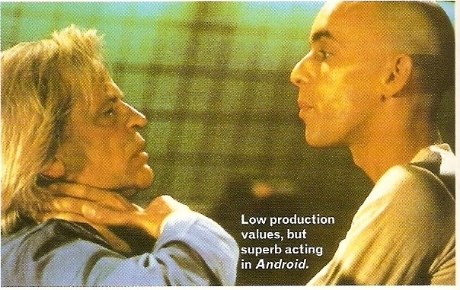 Michael J. Weldon says: "The stars are perfect in their roles, and Android manages to be exciting, funny, and very charming." He's right, although he makes this sound like a family film whereas it actually has prominent adult themes. The story, set on a space station in the 2030s, is hard to describe. The central character, Max 404, is a nerdy android who longs to live on Earth as a human. But Dr. Daniel demands his obedience. Three escaped convicts (dressed as police) stop at the station to make repairs, but the lone female, Maggie, finds Max strangely alluring. Max is also drawn to Maggie, but so is Dr. Daniel, who needs electron vibrations from a human female in order to bring his female android, Cassandra, to life. Quirky touches abound: the stop-motion dummies, the mandolin music, the clips from movie classics, and more. One scene leads into the next with a brisk, effortless rhythm. Camera work isn't particularly creative, but neither is it poor or distracting. The space effects are surprisingly good - note the smooth glide of the police ships, as if they really are flying in a vacuum. VideoHound, John Stanley, and The Phantom all give medium-high praise. VideoHound calls it "humorous and offbeat," but there is considerable tension.

Don Keith Opper who plays Max 404 was co-writer of the film. Brie Howard, so great here in her first role as Maggie, did little else. Kendra Kirchner, perfectly cast as the frizzy-blonde-haired Cassandra, appeared in no other films. Norbert Weisser, the smart convict Keller, appears at the beginning of The Thing as a Norwegian. The Anchor Bay DVD includes 2003 commentary from Lipstadt and Opper. Some tidbits: Roger Corman gave the filmmakers a lot of freedom as long as they stuck to the shooting schedule and budget (under $ 1 million). The filmmakers wanted a tone of "whimsy and melancholy." Opper meant the android wanting to be human to symbolize "a coming-of-age teenage angst thing." James Cameron drew some of the design sketches. Lipstadt thinks he gave Cameron ideas for The Terminator (e.g. the android perfectly mimicking recently heard voices). Android was supposed to be filmed on the sets from Battle Beyond the Stars, but those sets were dismantled prematurely, and so everything in Android was built anew.