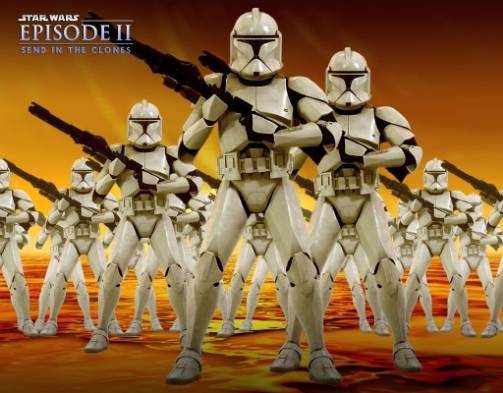 The 2nd chapter of the Star Wars saga and the 2nd prequel after The Phantom Menace (99), this takes place about 10 years after the previous film ended. Anakin Skywalker (now about 20 yrs old and played by Hayden Christensen) has been studying the ways of the Jedi under Obi-Wan Kenobi (Ewan McGregor), but seems too full of youthful arrogance, perhaps because he is extra proficient. The plot is jumpstarted by the arrival of Amidala (Natalie Portman) on Coruscant, the center of the Republic, to take part in an important vote. She is quickly targeted for assassination and Kenobi sets out to play detective in finding the one who ordered this attempt (we get a detailed look at Coruscant in this film and it's not that innovative). That leaves Anakin to guard the former Queen and, though she is obviously older - as was shown when Anakin was a little boy - they soon develop a romantic relationship on Naboo, her home.

I find that the structure of this film is similar to that of the 2nd film in the original trilogy, The Empire Strikes Back, in that it cuts back-and-forth between two storylines - the one with Kenobi and the one with Anakin & Amidala, but in such a way that it undermines the entire narrative. The back-and-forth is so severe at one point that I thought I was watching Anakin for a moment when it had cut back to Kenobi. The big picture of this entry is that many world members of the Republic seem to be breaking off from the confederacy and these are termed "separatists." This division is apparently being caused by a Count Dooku (Christopher Lee). Kenobi's investigation leads him to a hidden star system where a clone army is being bred and trained (all these clones are played by Temuera Morrison, who also plays the original source of the cloning, a bounty hunter named Jango Fett; he has an unaltered clone whom he raises as a son, named Boba Fett). Apparently, this clone army is meant to defeat the separatists. I keep writing 'apparently' because, not all is as it seems. There is also an expanded role for Mace Windu (Samuel L. Jackson), a powerful Jedi Master and one of the council, and Yoda, still voiced by Frank Oz.

Anakin, meanwhile, decides to return to Tatooine because he had been having nightmares about his mother (Pernilla August). But, he's a bit too late: she had been captured by Tusken Raiders a month before and survives only long enough to die in his arms. Anakin takes vengeance on the Tuskens, a turning point for the young Jedi: besides showing how ruthless he can be (nothing is shown of this slaughter, but we learn that he includes women & children in his wholesale killing), it also begins this strange obsession he has about ending death, similar to the old Frankenstein theme. His lateness in rescuing his mother also represents the overall scheme of these Star Wars prequels: the notable Jedi Council is shown as always too late or too slow on the uptake in uncovering the real plots, or the plot behind the plot.  In the end, Kenobi, Anakin and Amidala are all captured and meant to be killed in an odd arena-type entertainment sport utilizing various deadly creatures, but the Jedi Knights and clone troopers arrive to the rescue. There's a huge battle - the opponents are mostly droids - and then a confrontation with Dooku, who we learn also goes by the moniker of Darth Tyranus, the new Sith Lord employed by the hidden Darth Sidious (Ian McDiarmid, who also plays the increasingly sinister Chancellor Palpatine, granted extra executive power in this one) to replace Darth Maul (from The Phantom Menace). 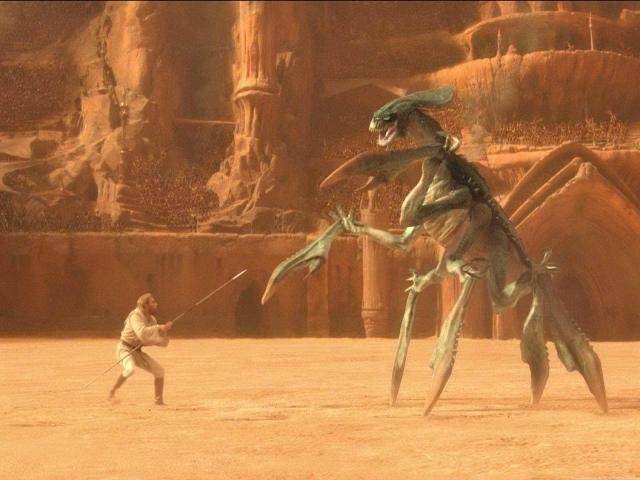 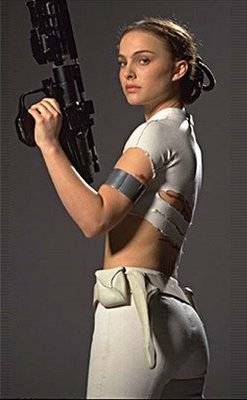 There is a similar weakness here to the presentation of The Phantom Menace, in which Darth Maul showed up as a villain but we never find out anything about him. Here, Dooku a.k.a. Darth Tyranus makes for a commanding antagonist (Lee was a natural for such), with superior powers, but why is he a Sith Lord? Why did he, a former Jedi Knight, turn to the dark side? None of the heroes speak about any of this. Tyranus just shows up out of nowhere as this much older former Jedi Master; he had obviously been around for a long time but there is absolutely no backstory on him - and it might have been interesting. The unrealized proposition here is why do some Jedis turn? It makes for fascinating speculation, but we are left with the singular experiences of Anakin as the only explanation. Instead, the film opts for some fan base gratification to finally depict Yoda in combat in the final act (Yoda is supposedly the most experienced and powerful Jedi), but some of this action comes across as comical. Christensen in the key role of Anakin (future Darth Vader) is mostly pouting and excessively immature, even younger than what he's supposed be, and fails to generate the needed tension of a burgeoning psychotic. Towards the end, he loses his right arm, but not much is made of this except to show that it can be easily replaced by a metallic arm; it's meant to foreshadow what happens to him at the end of the next film - the finale of the prequel trilogy, Revenge of the Sith (2005) - but also serves as an eerie parallel (or coincidence) to what happens to Luke Skywalker at the end of the 2nd film of the original trilogy, The Empire Strikes Back (80).  BoG's Score: 6.5 out of 10 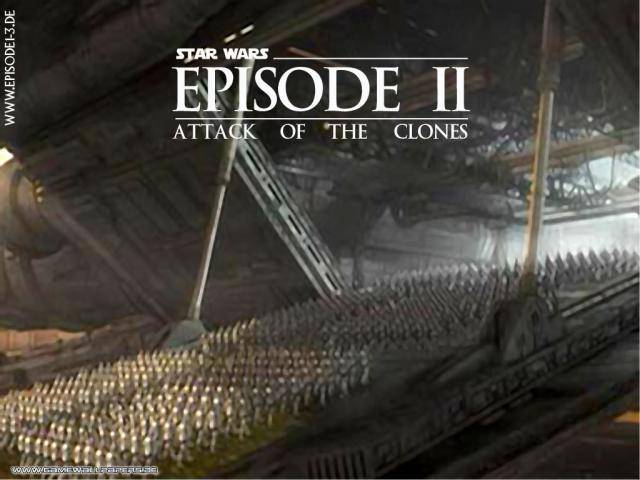 Clone Trivia: though the next film was Revenge of the Sith (2005), chronologically the animated TV series Clone Wars (2003-2005) follows the events here and details these wars which end in the early portions of Revenge of the Sith; there was also a 2nd Clone Wars series in 3-D in 2008. These Clone Wars were mentioned in the original Star Wars (1977 Episode IV).  Though Attack of the Clones was, as expected, a big hit, it grossed far less than its predecessor, The Phantom Menace - $302 million vs. $431 million; it was also the only Star Wars film to not be the top domestic grosser of its year (the 1st Spider-Man film and the 2nd Lord of the Rings film beat it that year).