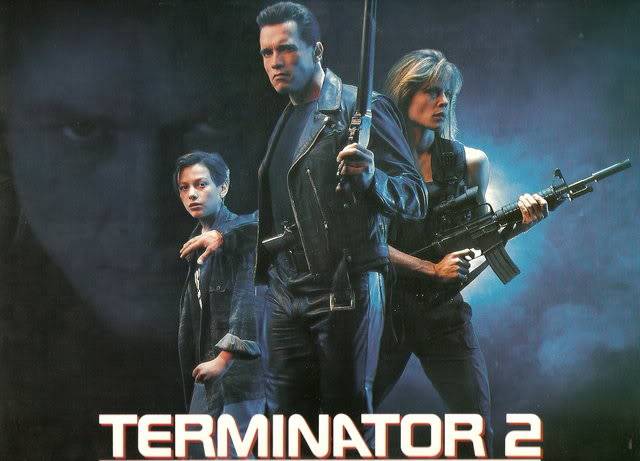 JUDGMENT DAY Directed by JAMES CAMERON
Picture a world in flames. Picture a world covered in ash, covered by the skulls of the dead.
Picture all this, as well as a horde of metallic Terminators, scouring the land.
Picture the ultimate war. Not a bad way to start a film, eh? 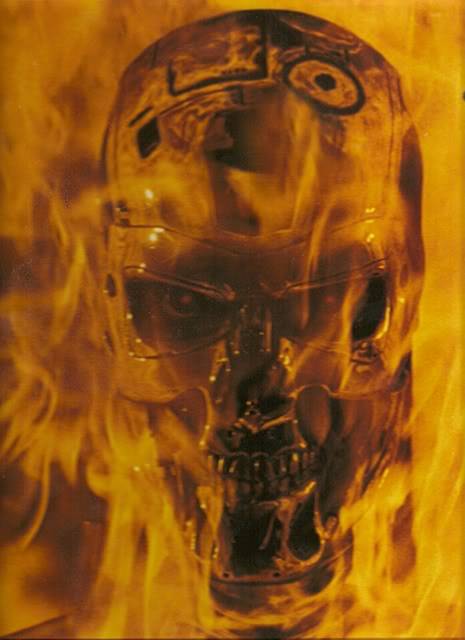 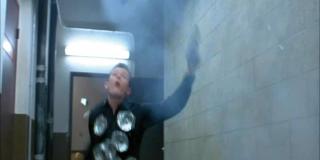 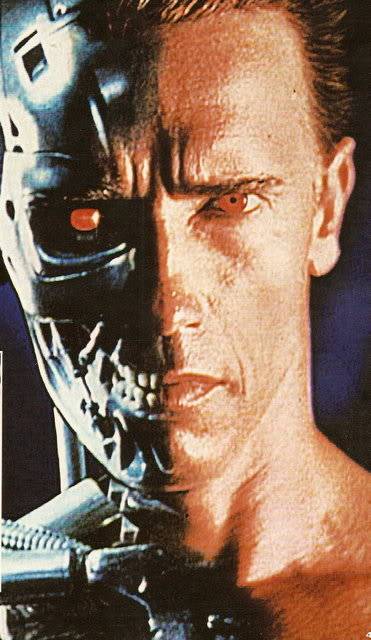 ROBERT PATRICK as the T-1000. _______ JOE MORTON as Miles Dyson.
This sequel to THE TERMINATOR (1984) was, in many ways, the end-all and be-all of science fiction movie sequels. This was how it should be done. Think about it: how do the two Matrix sequels measure up to this one? Answer: they don't. 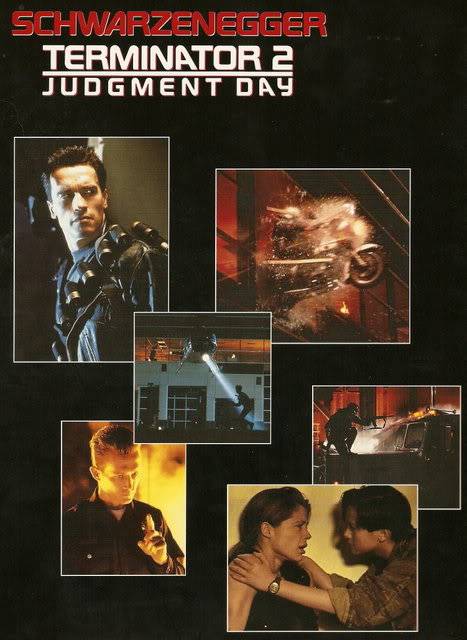 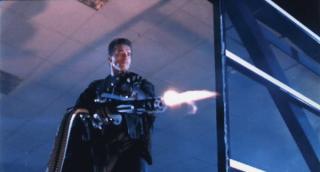 Director James Cameron pulled out all stops on this one. The film takes place about 10 years after the first one ended. The first thing that's great about this sequel is that the characters actually changed and evolved with time, as in real life. This is especially evident with the Sarah Connor character, played by Linda Hamilton. She's really lived those past 10 years and lived them hard, it's shown here. She's not only 10 years older, she's 10 years harder, tougher and angrier. She's kept locked up in a state sanitarium at the beginning here, tended to and tormented by the same psychiatrist (Earl Boen) whom she first encountered in the previous film (OK, this guy hasn't changed much). 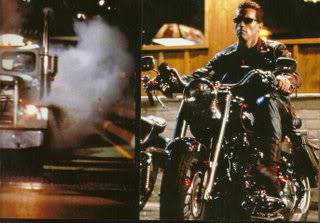 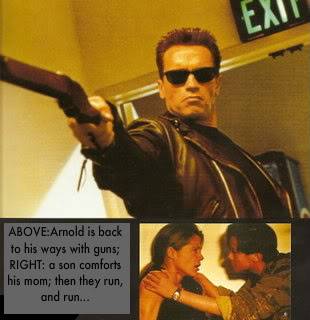 Her son (Edward Furlong) is a juvenile delinquent, being raised by foster parents - hard to believe he's the future savior of the human race. Arnold the cyborg arrives from the future again; yet, is this the same Arnold?  He swiftly acquires a motorcycle, some clothes and begins his mission. But, what is his mission? Cameron pulled a slight sleight-of-hand here, very impressive for a sequel. As before, another time traveler shows up; now, again, which is the good one and which is the bad? We really are unsure, unless someone told us or we read something before watching this film the first time. When the two time travelers finally catch up to their objective (young John Connor/Ed Furlong), the film gears up into the most fantastic thrill ride we've ever seen.

Of course, the real stunning aspect to all this were the new revolutionary computer FX at that time. Back then, they really were new; this was before even the first Jurassic Park film. Back in '91, they were just amazing to behold. The T-1000 villain, morphing into various shapes and people, set the new standard. Here was a truly unstoppable foe. Arnold, the ultimate brutal cyborg of 7 years earlier, began to look more & more outmoded as the film wore on. I actually began to feel some pity for the poor outclassed robo-man played by Arnold as the film neared its conclusion. This was a turnaround rare to see in sequels. What's sobering to realize, however, is that now, almost 20 years later, the use of computer FX in this film is still about the best use of such technology in film-making. 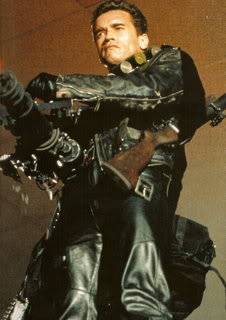 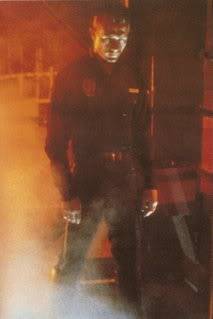 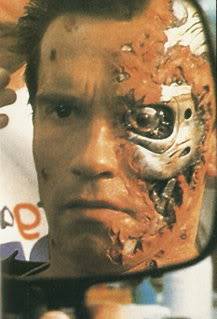 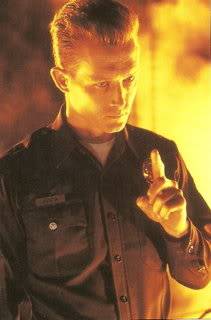 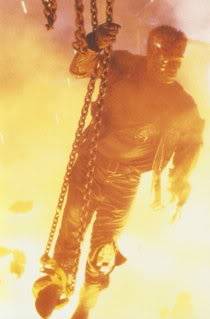 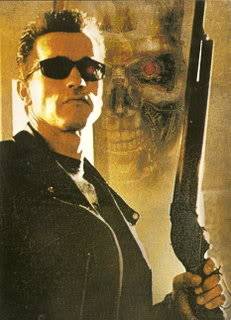 Even more than the first film, this one impressed on us the possible danger of advancing science & technology (ironic in that the tech used for this film was of the highest standards). Here we were hit square in the face with the hovering specter of nuclear holocaust. Again, the depiction of the nuclear bomb going off is still the best such realization in films. This was what you could really do when you had the money; at $100 million, this was the most expensive film up to that point (far surpassed later by Waterworld (1995) and Cameron's own Titanic).

We quaked in fear & excitement at the prospect of what was to come. 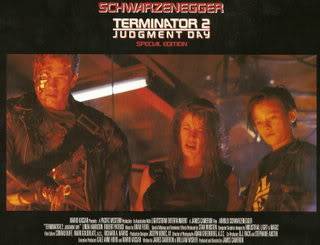 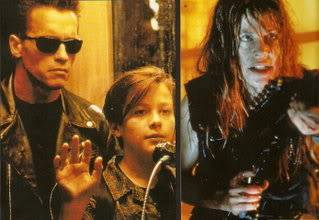 A special extended edition of this film was released in late 1993 on Laserdisc, later on special DVD editions; it has an extra 15 minutes and is regarded as the definitive version now. Arnold would not return to the role until Terminator 3:Rise of the Machines in 2003. But there was a theme-ride called Terminator 3-D in the mid-nineties, in which Arnold played some scenes. Terminator 2 was the highest-grossing film of 1991. BoG's Score: 9.5 out of 10
"I'll be back" the Terminator always promises. 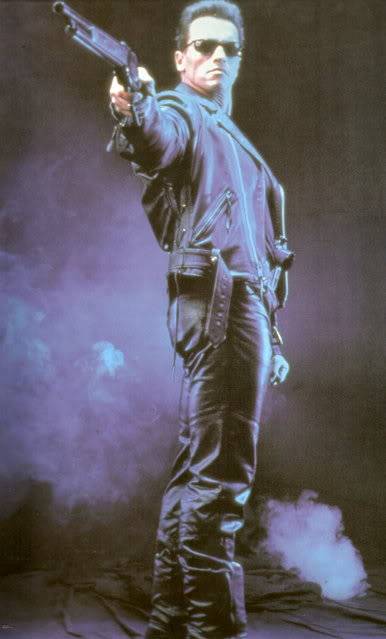 Behind the Scenes of T2 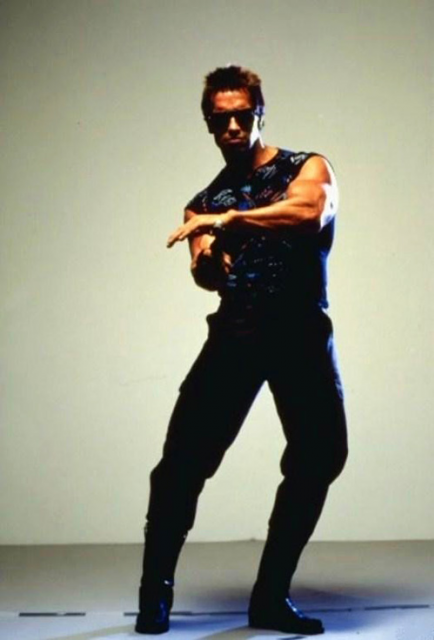 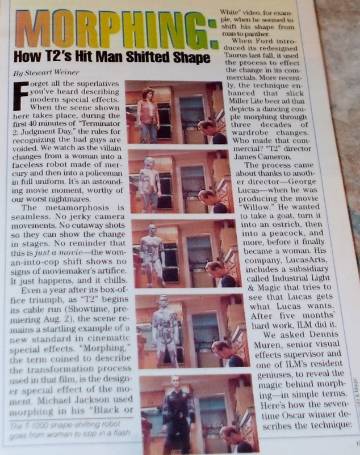 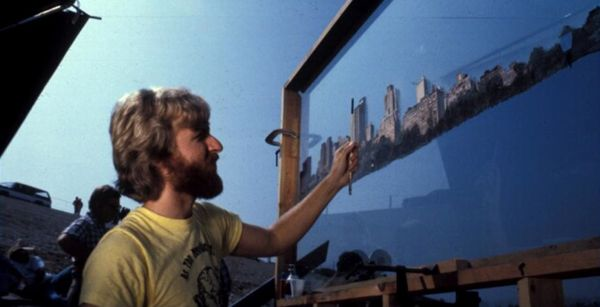 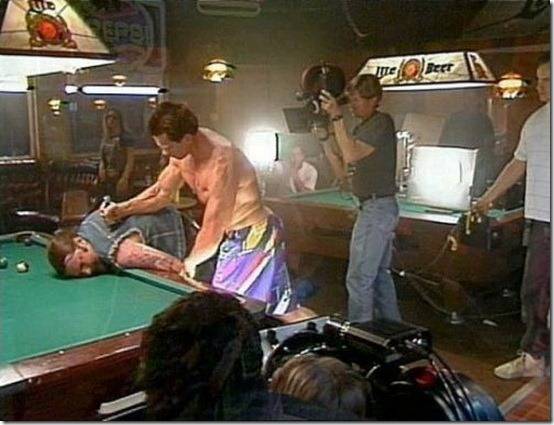 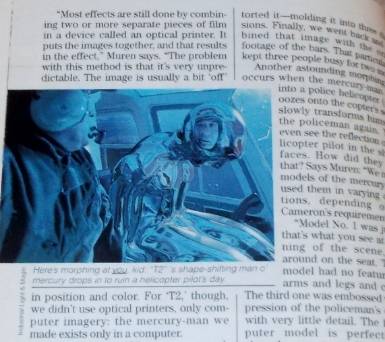 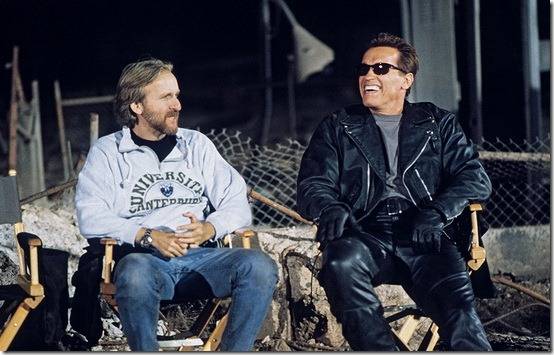 Poster imagines the film in the late seventies; the first film (see Terminator thread) would have been released around 1973;
since McQueen died in 1980, this sequel version was then released in about 1979;
McQueen, as Reese, would have a small role in this one: 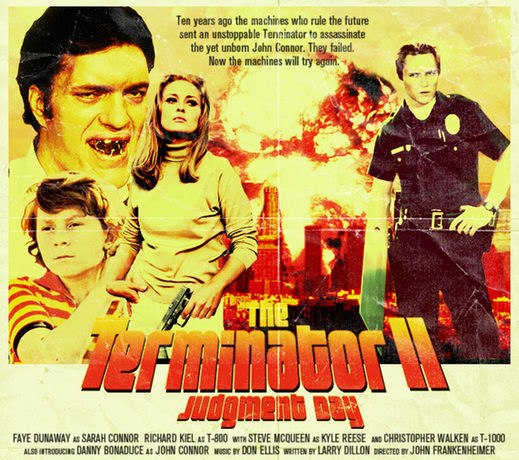 Just one discrepancy with that, however: based on the participation of kid actor Bonaduce, the
film was more likely to have been released in 1975 or 1976, and the first one in 1970/1971...