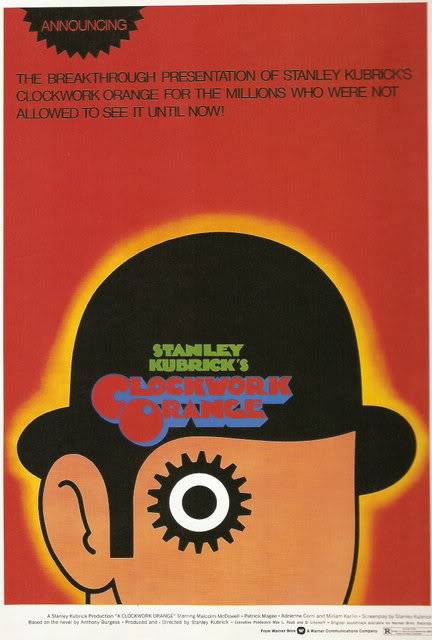 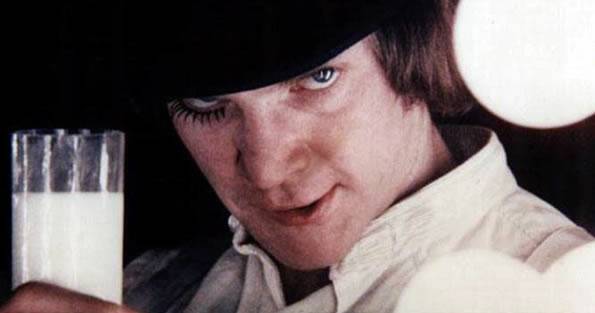 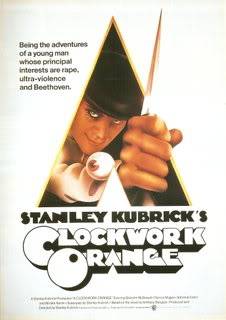 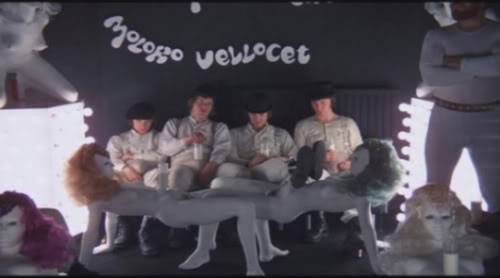 I didn't see A CLOCKWORK ORANGE when it first came out; I was too young. But, I did see it in a theater in one of those 2nd-run avenues, in the late seventies. I was stunned as I walked out. I had seen something totally unexpected, something which took me completely by surprise. I thought I knew and understood cinema. Well, NOW I did. Now I knew what cinema was capable of. I now knew that cinema could be used to impart unforgettable, disturbing images - not grotesque, as in a slasher film, but provocative indeed - which would stay with me for a lifetime. 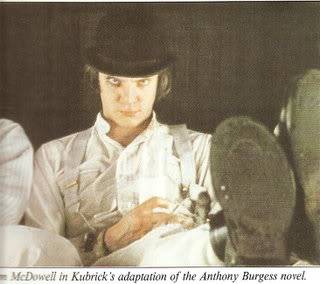 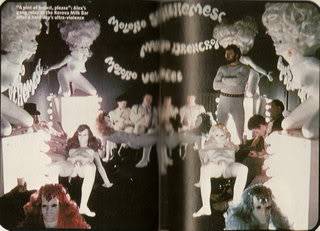 A CLOCKWORK ORANGE immediately became a favorite of mine. I literally could not get it out of my head, and this continues to this day, 30 years later. It begins with this bright red, blank screen - a primary color - then Kubrick's credit on a blue screen, equally bright, and then the character of Alex staring right at me. It was hypnotic right from the beginning. 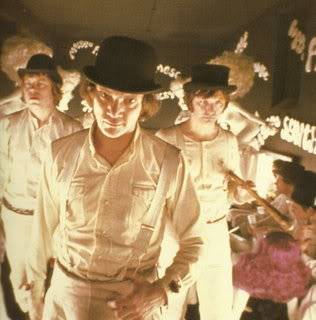 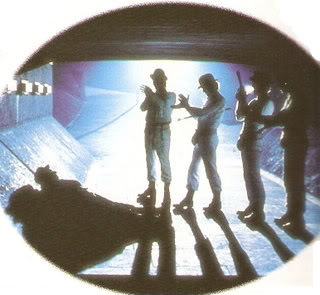 Right from the start, Kubrick employs the camera to place us in the position of voyeur. That's really what all films - the good ones, at least - do, but Kubrick manages to take it all to another level. We are spellbound by the activities of Alex and his droogs, a quartet of hoodlums indulging in some after-hours hooliganism at some future point in Great Britain. 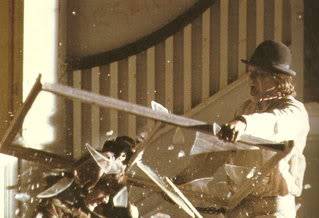 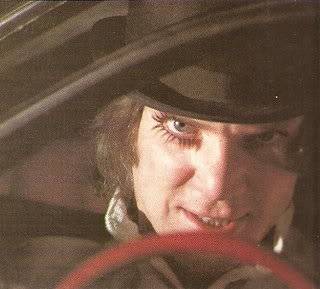 Alex is the leader of his gang - there's a definite hierarchy here - and narrates the tale as the gang beats up a drunken bum, a rival gang, drive a stolen Durango auto on the roadways and invades a home for purposes of rape and theft. This is the future but this is also now. This film has not dated whatsoever. The events could very well be taking place about a decade from now. The eye of the camera dwells on the events. It does not turn away. We can't, either. Viddy Well, my brothers. 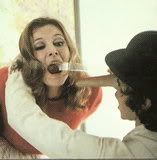 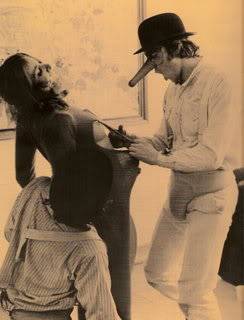 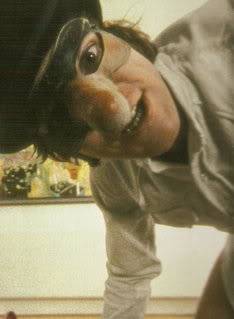 The gang drink what is called moloko-plus, or milk-plus, which means the drink is laced with some kind of drug, in the Korova bar - a public bar. This makes one wonder right away what kind of society would set up such a scenario, where-in a gang of hoodlums would be allowed to amp themselves up for some ultra-violence. They speak a degradation of the English language, mostly a borrowing of Slavic (Russian) words, called Nadsat.  Perhaps I was drawn to this film more than most because I was familiar with the Russian language, who knows? But, most viewers become accustomed to the irregular speech anyway; when Alex says "Come and get one in the yarbles, if you have any yarbles, you eunuch jelly thou," I think most people understand what that means. Through this language, the film creates its own, alternate world, a world which works within the context of the story. I've included a listing, or a glossary, of terms after this post of the Nadsat language, for those interested. 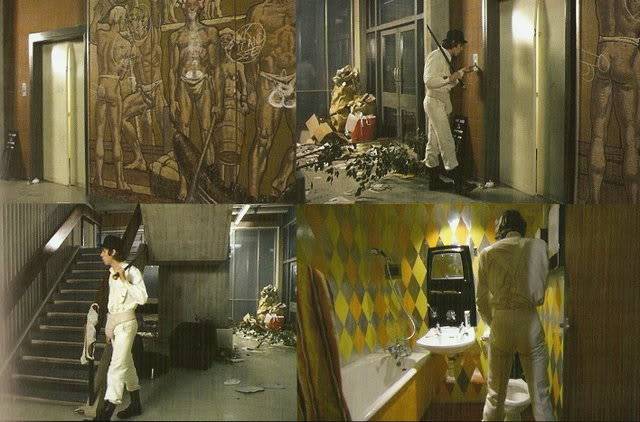 Alex' world is at once nightmarish and fantastic. He lives in the night, preying on others with his gang. He rules in this night. This world is presented as exciting and addictive. In a way, it's poetry in motion. We gaze at it through the eyes of Alex and he invites us, calling us his brothers, speaking to us in a friendly, almost sympathetic tone. We need to slap ourselves, to force ourselves to turn away, to disavow this indulgence of his. He walks back to his home, an apartment he lives in with his mom and dad. Everything is decaying. Kubrick's camera, as usual, dwells on it all, to make sure we don't forget it. Maybe Alex has the right idea? After all, he seems to be the most alive. He enjoys Beethoven and bedding down two cute girls at the same time. By contrast, his parents seem almost like pathetic caricatures and his truant officer, Mr. Deltoid, seems like a real creep. The daytime is not very impressive within this film. It seems like drudgery & revulsion. 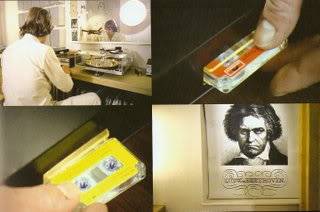 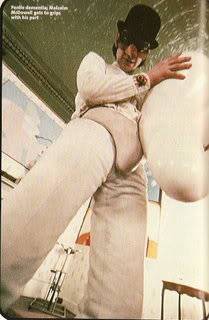 All this is covered in the first 45 minutes of the film. Then, the worm turns. Alex is finally apprehended by the police. Everything shifts. Kubrick now presents his argument, which doesn't really appear to have a counter-argument. The other side of the coin is rigid bureaucracy, the order of things. Yet, it's not very palatable. Further, the government's proposed solution to such problems such as Alex is going back to the whole 'mind-control' theme. In the end, the film suggests that society creates such creatures as Alex and then seeks to uncreate them through thoroughly unnatural means.  This just creates further problems. 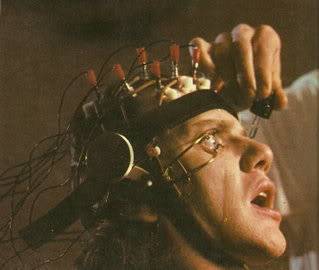 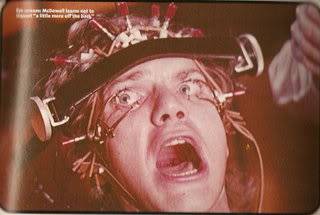 This, by itself, opens the door to much debate. Where does the fault lie? Who is ultimately responsible? What is the solution? Myself, I must first point to the parents, who are depicted as thoroughly useless. From what I see here, they probably completely ignored Alex as he was growing up - but that's all supposition. This film is quite prescient; it accurately anticipates the growing problem with teenagers who grow up with no restraints and a government bureaucracy which is self-absorbed, not really addressing society's problems. It's really an attack on modern society as a whole, with no apologies. There may be no solution at this point. 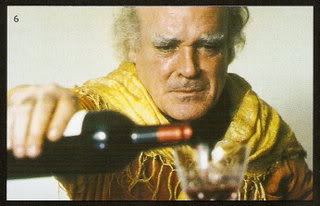 Malcolm McDowell is perfect as the amoral Alex - a leader, a friend, a son, a smug opportunist and a complete monster. He lends such a disarming, carefree persona to his character that we tend to forgive most of his reprehensible antics. Isn't that what some serial killers do? (so they say). They present themselves as very likable people though, in reality, they are the worst of us. His gang, particularly Warren Clarke as Dim, are also very well realized. Magee begins as one of the victims but becomes another psychotic by the end, another cog in the broken system. And Bates is great as the loud chief prison guard, another cog.
http://www.divxlink.com/wnjwvmbe1vgs/A.Clockwork.Orange.1971.DvDrip-aXXo.tt0066921.avi.html
But, it's the style of this film which really holds me captive. It's a succession of startling, beguiling images, presented in such a manner as to bore straight into the deepest reaches of the brain. A simply unforgettable film, and more relevant than ever. BoG's Score: 9.5 out of 10

A CLOCKWORK ORANGE is based on the novel of Anthony Burgess, written around 1962. Burgess created the Nadsat language used by the characters in the story, mostly words derived from the Slavic language. Though, not all. The word "Yarbles" for example, is not derived from that source. Below, I've included only those words which come from the Slavic/Russian language.

A Behind the Scenes Clockwork 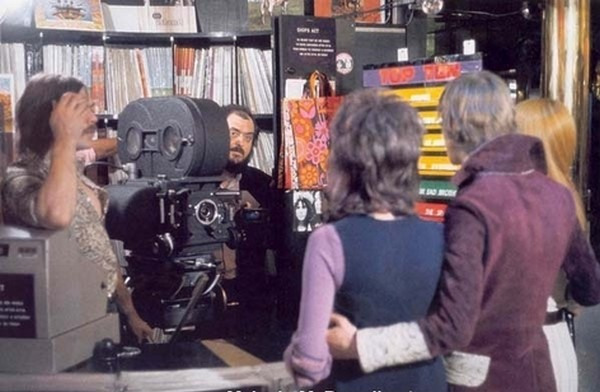 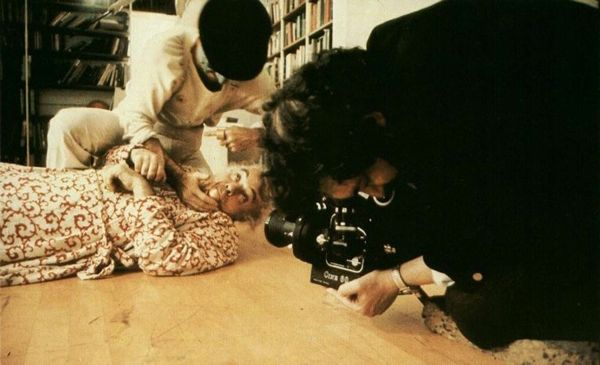