JOURNEY TO THE CENTER OF TIME 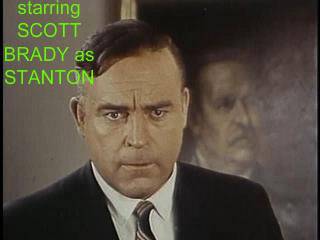 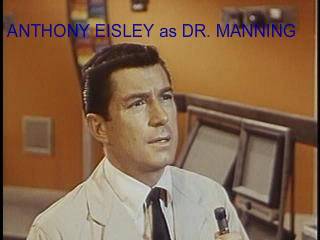 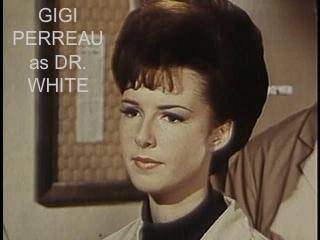 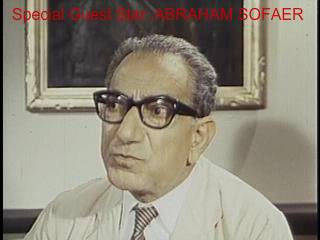 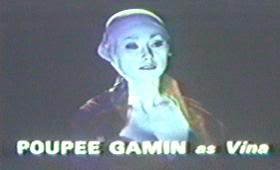 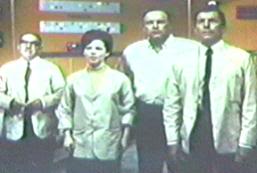 All this and LYLE WAGGONER too! (not to mention Teddy Roosevelt).
Perhaps the greatest time travel sci-fi film ever - building on the concepts of THE TIME MACHINE (1960) and expanding on them... no?

Did I have you going there...? OK, in truth, this is probably the worst movie about time travel and on my crap list for a long time because it's such a blatant redo / rip-off of THE TIME TRAVELERS (1964), which itself was quite low budget. It's as if some producer in the mid-sixties thought 'hm, we need an even lower-budgeted, slower version of that cheap sci-fi pic about time travel.' However, it's not as bad as I remembered... before the 'action' there's a lot of theorizing (by Sofaer as Doc Gordon) about time travel being the 4th dimension; fans of such sci-fi discussions will no doubt be at least mildly entertained. 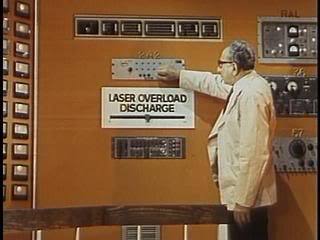 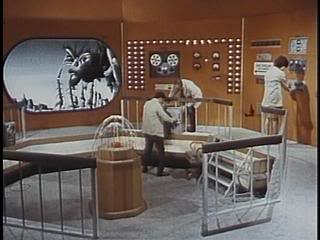 There is one near-brilliant moment which I forgot about until I watched this again, at the 8 minute-45 second point of the DVD version I have: as the scientists are busy fiddling with their controls, the spider-rat monster from ANGRY RED PLANET (1960) pops up on the viewscreen for one second; the scientists don't see it, but the audience does (see above picture, right). But, this is one second out of an eighty-minute film, realize. Most of the movie crawls at a very deadly pace.
Watch A Journey to the Center of Time in Entertainment  |  View More Free Videos Online at Veoh.com
In the plot, there's a cheap movie version of The Time Tunnel experiment seen on TV at about the same time, with four people accidentally going on a trip to 6968 AD. There we meet visiting aliens led by Vina (Poopee Gamin). Here's the poop: the aliens, looking for a new home, had picked the wrong time to try Earth, which is in the middle of a nuclear war. The chat is interrupted by... basically, by scenes copying stuff from THE TIME TRAVELERS (did I mention this is a remake of that?). So the time travelers flee and end up in Earth's prehistoric past. Sounds exciting, yes? It isn't. 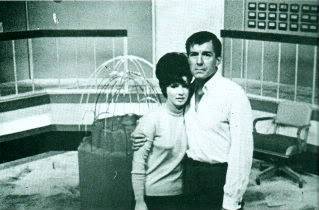 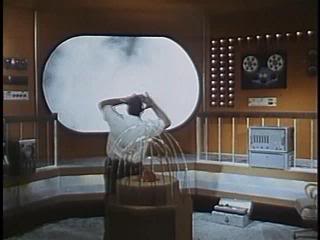 Scott Brady as Stanton is the rich, obnoxious businessman on this journey who makes a mess of things every 15 minutes or so. His final fate is what elevates this above the bottom of the dung-heap of the truly worst sci-fi, but it ain't much. A lot of people are credited for this (in the very long, slow credits) but I'm thinking none of them did very much - especially the production designer; we're talking very minimalist sets, to put it kindly. There might be some charm in detecting the various steals/homages to better time travel films - at one point, a character states "I have all the time in the world."