SCHWARZENEGGER is THE TERMINATOR 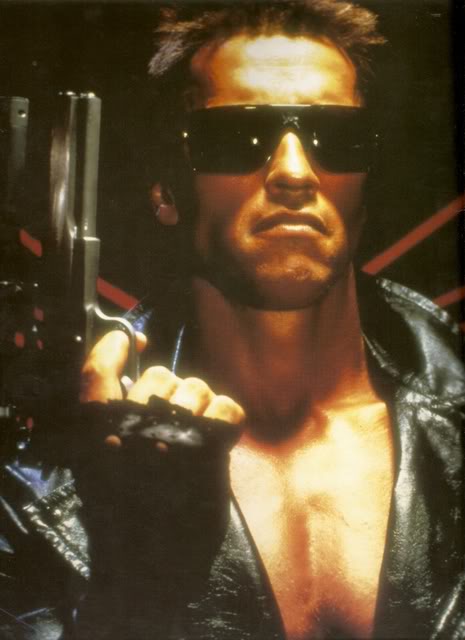 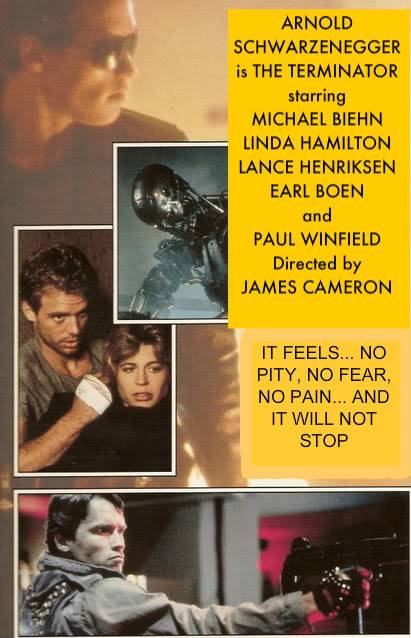 It's difficult now to appreciate what an impact this film had on the rest of the eighties and nineties, and continues to have - witness the new Terminator series, The Sarah Connor Chronicles and the recent 4th Terminator film. Director James Cameron, in his first real directing feature (he's also credited for Piranha 2 a few years before this), managed to craft a nearly-flawless action thriller on a small budget (about $6 million), with the science fiction elements of time travel and artificial intelligence thrown into the mix. 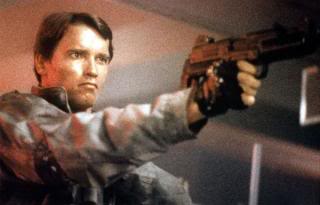 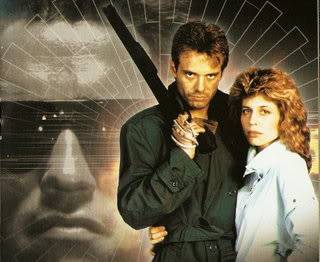 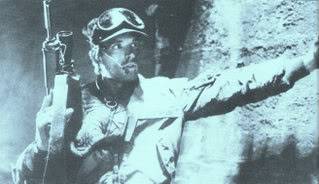 I remember the attitudes about this film even before it was released, when trailers were playing in theaters. Audiences laughed at the sight of Arnold, playing some grim killer, it looked like. Not many were laughing during the actual film. Some still needed to be convinced.  When Arnold casually breaks a tough bouncer's hand at the start of the infamous disco scene, I heard a guy in back of me groan in disbelief (c'mon, not even Arnold, playing some weird soldier of the future, can be that tough). At this point, not everyone was aware of the full story; the big reveal came right after the disco scene, in the back alley, when

I heard the 'ohs' and 'ahhs' all over the theater. This  is what thrilling film-making was all about. Or, it used to be. 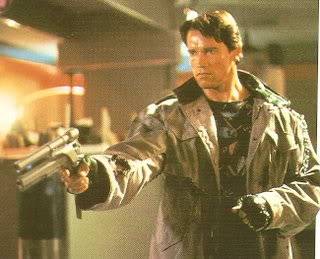 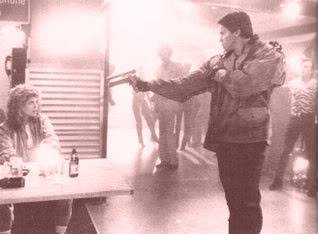 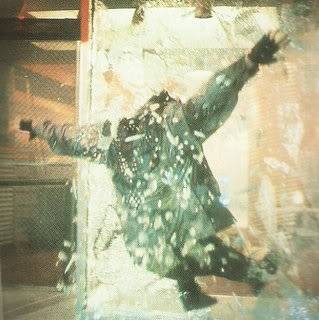 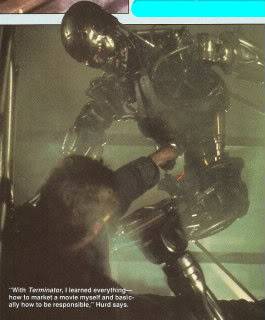 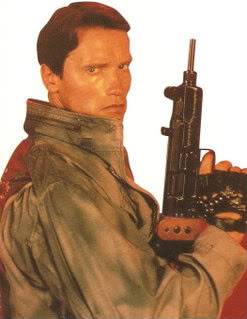 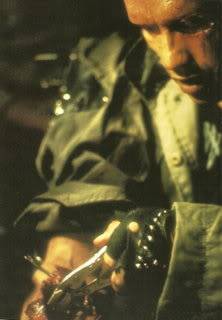 The film managed to throw all these curves at the audience, unnerving them, unbalancing them and keeping them on their toes. No one can deny this film has a sense of humor when we see, in the beginning, Arnold strolling in the nude towards some street punks (one of whom is Bill Paxton in an early role). It's amusing. Yet, in the next minute, Arnold becomes the source of a kind of horror and we feel pity for these punks, whom we despised a minute earlier. The film later surprises the audience not once but twice with scenes of carnage at places usually designated as safe - the crowded disco and, even more, the police station. This was breaking all the rules. I suppose, if anyone could do it, it would be Arnold the cyborg. 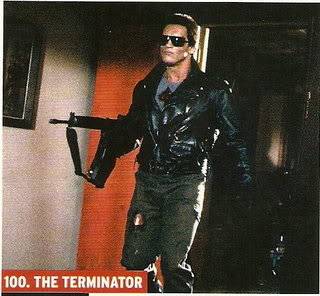 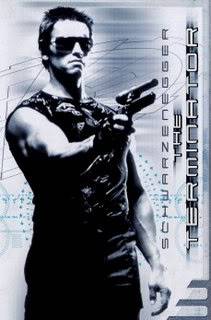 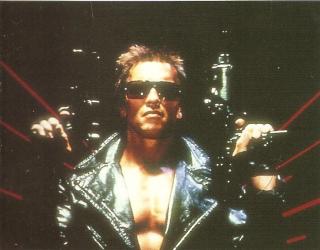 The action was overlaid with a haunting theme of time lost love and the absolute danger of ever-advancing science. It all seemed simple at first: Arnold is here from the future on a mission of murder; his target is a young waitress (Linda Hamilton). Another scruffy time traveler (Biehn) is on his own mission; we're not sure what, at first. And soon, events and circumstance spiral into unexpected directions, which sometimes happens when human nature is involved. Revelations about the dark future of year 2029 are given a poignant allure due to further reveals. Famed writer Harlan Ellison, who wrote his own story about a soldier from the future (see the Outer Limits episode "Soldier"), was acknowledged in the credits after he threatened to sue (see several posts down for video). Hell, this movie even has a scene of Dick Miller selling guns to Arnold. You can't go wrong with that. BoG's Score: 10 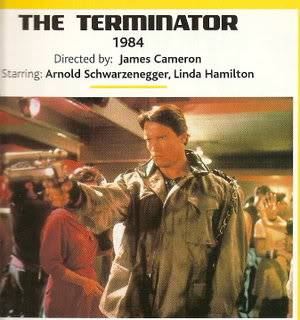 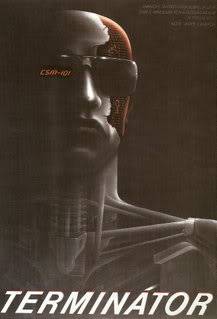 The sequel was Terminator 2: Judgment Day (1991), a humongous and slick sci-fi action picture which was the most expensive at that time. It was the biggest film of the year and rightfully so: it expanded on the original's themes & story, and was a great thriller itself, using its money and new FX quite well. But, the groundwork was laid here... tonight...

DivX® is a registered trademark of DivX, Inc. http://labs.divx.com/WebPlayer
Terminator Trivia: OJ Simpson was originally intended for the Terminator role and Arnold was slated for the human fighter (Reese) role; the character of the Terminator had only about 100 words of dialog... 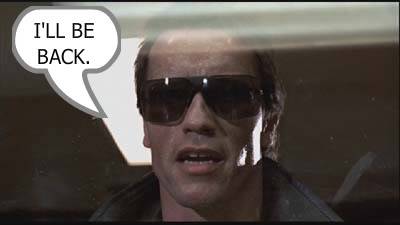 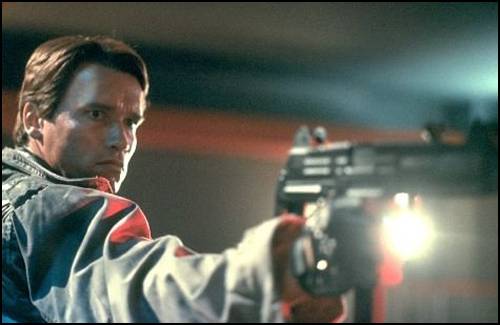 Behind the Scenes of the Terminator 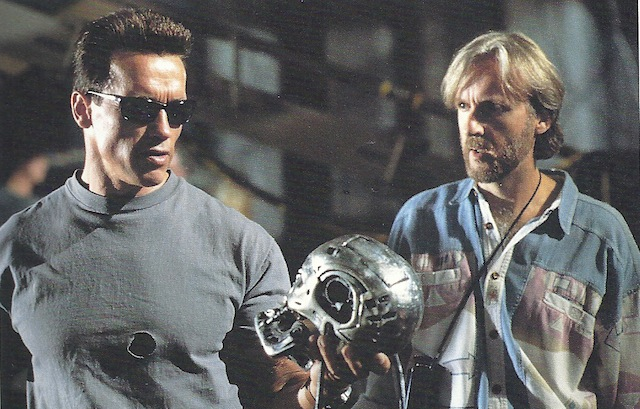 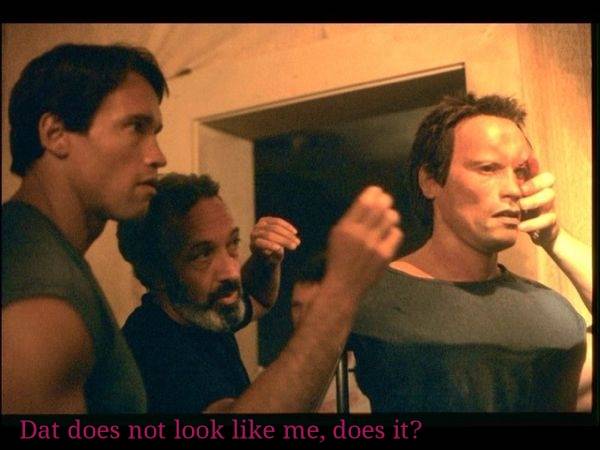 What if Terminator in the Seventies

Poster imagines the Terminator film about a decade earlier, possibly Kiel's
breakthrough role instead of the James Bond henchman role: 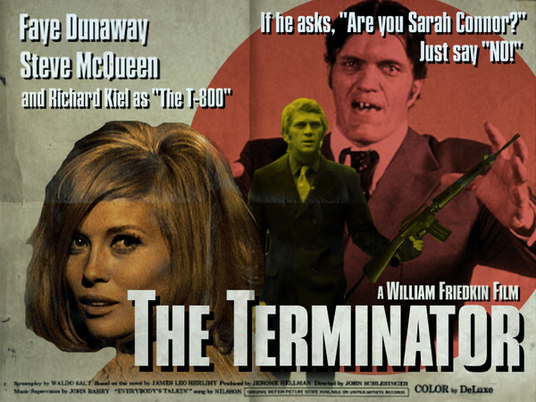