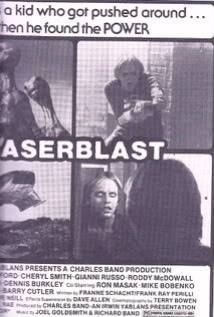 LASERBLAST! I saw this in a theater way back when it was released. A DVD was put out a few years ago. This sci-fi (sort of) film is emblematic of low budget sci-fi in the seventies, in that the filmmakers didn't have much money, but they didn't get very creative either. It's sci-fi exploitation and the poster makes this look better than it really was.

Many sci-fi fans are familiar with it due to the stop-motion animation by Dave Allen, who presents two lizard-like aliens here. They're in pursuit of a humanoid fugitive in the desert as the film begins, another alien (maybe? as with a few things in this film, no clarification is offered) armed with a special laser bazooka. The alien cops/bounty hunters zap their target but get spooked by a nearby airplane; they depart, forgetting the bazooka and a pendant which their target was wearing around his neck. Enter: Billy Duncan, the local disaffected teen. He quickly figures out that the bazooka works while he's holding or wearing the pendant; the kid has a new toy! Zap-zap-zap!
______________________ 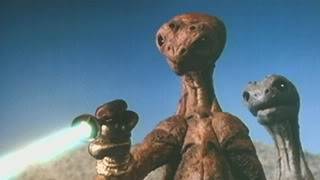 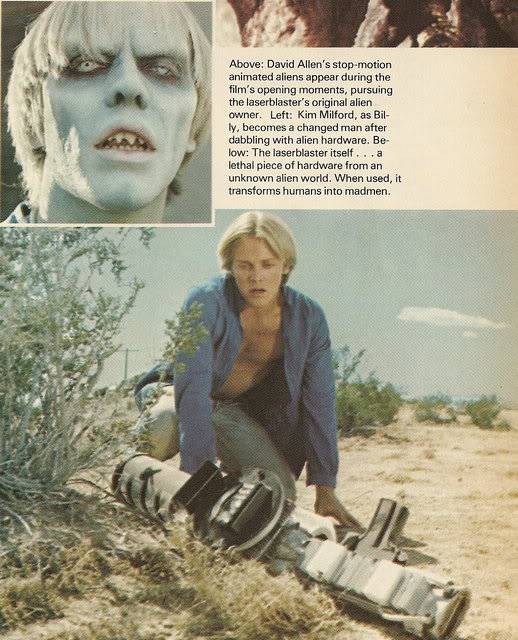 Kim Milford as Billy strikes a strange note in the role right off the bat. In his first scene, his mom leaves on some pleasure trip; this is a nice-looking kid in his late teens with a girlfriend (Cheryl Smith), yet he's sad that his mother let's him have the house to himself for a good spell. There's something 'off' with most of the film's presentation; I'm guessing the people involved just weren't sure of what they were doing. In an awkward fight scene between Billy and a couple of bullies in a family room, Billy's girlfriend taps the big bully with a tennis racket - with the fiber portion! The guy falls away as if he'd been hit with a brick. The small bully is played by Eddie Deezen, the perennial nerd in all his other films; in this film, the cool-looking kid is the nerd.

The strangest and most mystifying element is the presence of Gianni Russo (most famous as the weasel-punk Carlo in The Godfather/1972) as a dark-suited government man who shows up out of nowhere in a dark sedan. He drives around, pokes around the remnants of the laserblaster's targets and acts threatening towards the local sheriff's dept. It's almost as if Russo strong-armed the film's producers into giving him this pointless role. Then there's the two cops in that single-engine airplane who spot Billy in the desert and decide to shoot him on impulse. Or something. 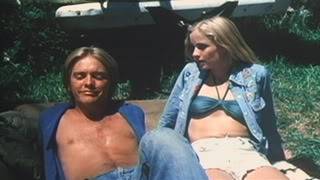 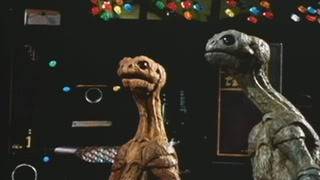 Anyway, the gist of this is that the more Billy wears the pendant and uses the laserblaster, the more mutated he becomes, resembling a zombie from George Romero's Dawn of the Dead (the make-up only extends to his face, not his body, however). A good guess is that some kind of alien radiation from the alien weapon is responsible. He ends up blowing up a few cars and getting rid of the few people who annoy him. He also develops this shambling gate, as if he's stoned; this may very well be a metaphor for drug abuse - stay off those bad drugs, kids! Or you'll turn into a zombie-like killer!

Some of this may sound exciting, but there's a very slow pace for much of this. The filmmakers felt that showing cars and telephone booths getting blown up over & over would be sufficiently exciting. The conclusion is full of this, probably filmed on a city block studio set which was rented for a day or two. This may satisfy your Laserblast fix:
LASERBLAST No Paradise Music Video  Laser Groove!_____________________ 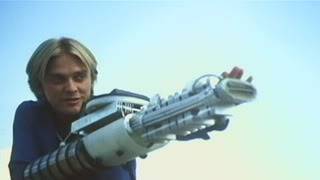 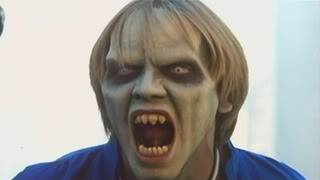 Roddy McDowall appears in a 5-minute role as a doctor who examines Billy; he doesn't get to pursue his findings, if you know what I mean. Keenan Wynn has a couple of scenes as the girlfriend's grandfather; he's an ex-military man who seems to suffer from mild dementia. Though their roles are very brief, they do demonstrate the difference between professional actors and questionable actors. As a morbid postscript, I will mention that the two leads died fairly young: Milford in 1988 at age 37 and Smith in 2002 at age 47. 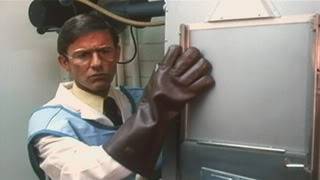 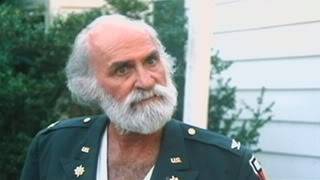 I will say that the lizard-like aliens are interesting. They pop up briefly in the middle again and then at the very end. They seem to be possibly descended from some dinosaur-like race. Their alien speech is unique and intriguing - we never know what they are talking about and have to make guesses based on the visuals. Allen imparts to them a sympathetic air. Since this is another example of the film not bothering to spell things out, a viewer can judge this as either refusing to dumb things down for an audience or just laziness on the part of the filmmakers. BoG's Score: 5 out of 10 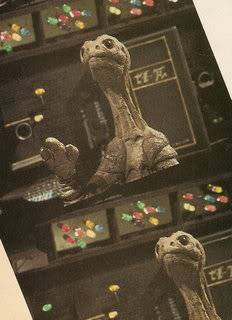 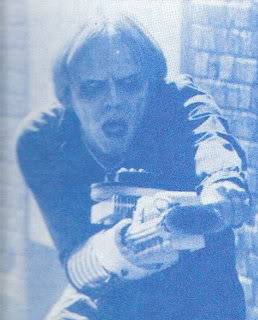 Finally, this could just be my imagination, but I could swear that the audio in the very first sequence in the film (with the fugitive, the first user of the laserblaster) is lifted directly from the Star Trek episode, The City on the Edge of Forever; it sounds like the exact same moaning music/sound on that planet with the Guardian of Forever. Anyway, here's a funny way to watch the film:
Quote from TV Spot: "This Could ALL be Happening Right Now Somewhere on this Planet" - Ha!