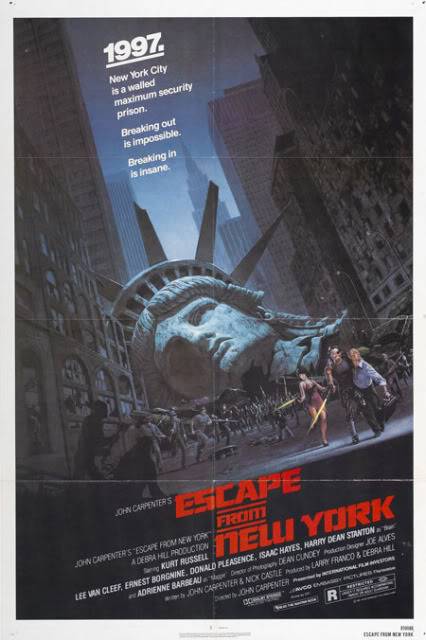 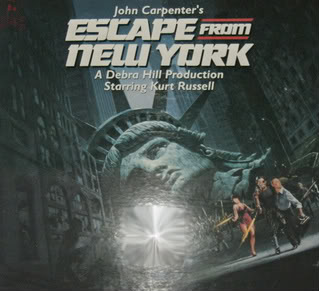 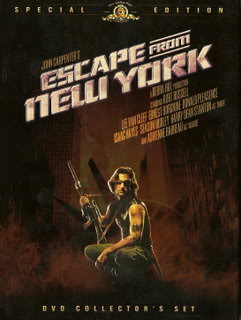 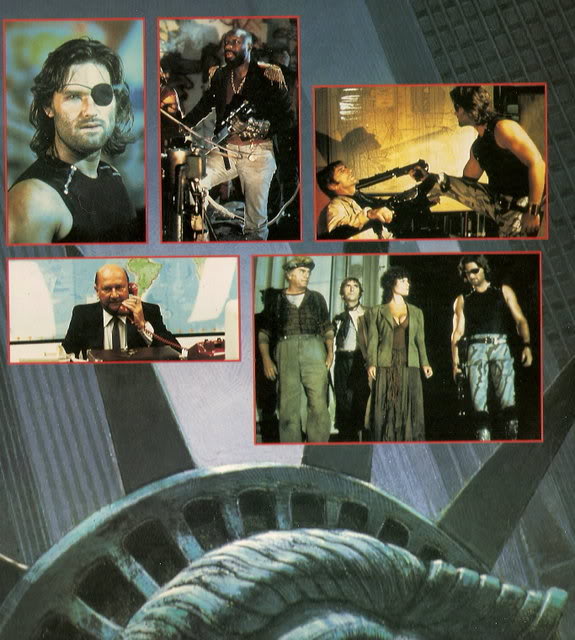 In 1981, John Carpenter presented his vision of the future: 1997, to be exact. Was he premature? Alarmist? Out of his mind? According to Carpenter, the crime rate would rise 400% in 1988 (it didn't turn out to be quite as bad in our reality, but close). As a response to this problem in the world of this film, those in charge decided to convert the island of Manhatten (New York City, yes) into the one-and-ultimate maximum security prison in the USA.
The U.S. police force surrounds the island, which has a huge new wall, and all bridges are mined. Yes, this is a somewhat pessimistic view of our society (and Carpenter's logical follow-up to his Assault on Precinct 13-1976, which also dealt with the escalation of violent crime) and is, therefore, a dystopian view of the future. 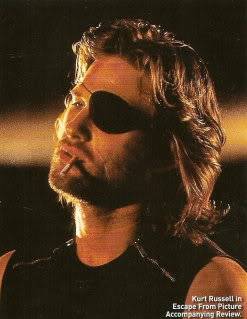 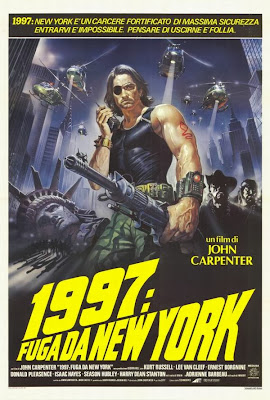 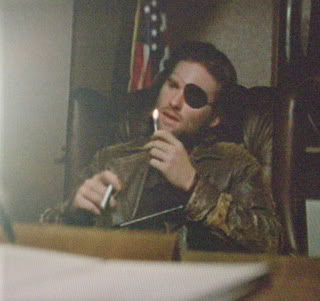 Enter: Snake Plissken (Russell), ex-army, now outlaw, captured during a robbery attempt. But, fortune smiles on some anarchists in this world; at the point when Snake would normally be sent into the city-prison for life, Air Force One goes down in the center of the prison, the President of the USA (Pleasence) taken captive by the convicts.

Snake is who we all want to be but are too afraid to be. - Producer Debra Hill

In this crazy world, the military, secret service or even CIA are not the ideal choice for such a rescue mission; no, what you do is send in the guy who breaks all the rules and makes up his own. Russell as Plissken was a complete and welcome surprise to most movie fans back in '81 - they had known him only as the star of some Disney comedy-fantasies at this point in time. Here - unshaven, unkempt, needing a haircut, sporting an eyepatch and emulating Clint Eastwood's speech delivery, Russell was the ultimate iconoclast - fitting perfectly into the dark, unpredictable atmosphere of a Carpenter future-dystopia (now seen as a parallel reality from our 2015 perspective). 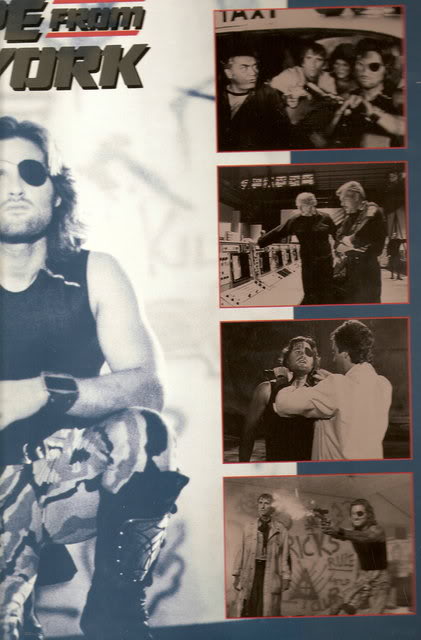 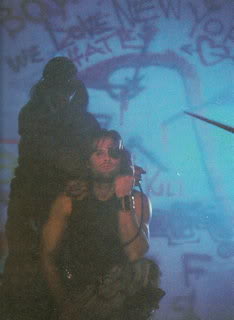 And it was quite an atmosphere. I think what impressed most fans of this film is its ambition; Carpenter went out of his way to create an alternate reality, a downbeat reflection of our own, with numerous details all worked out to present a complete picture. 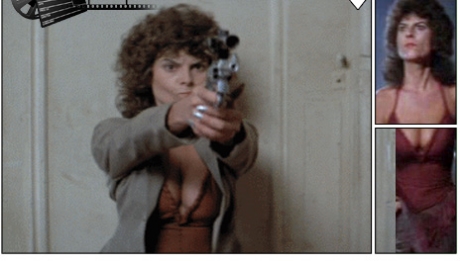 Carpenter also filled the screen with memorable characters, from the amusing Cabbie (Borgnine), the tough Duke of New York (Hayes), the bizarre Romero (Doubleday) and the sly Brain (Stanton, who, as usual, is a real stand-out). There are shadowy denizens of the city known as "The Crazies" who live underground in the old sewer system. Their brief appearance early in the film, rising from underneath the streets like demons, lends a near-horrific aspect to the story, showing the audience the unpredictable, dangerous nature of this once-great city. Season Hubley appears in this one scene; she was married to Russell at the time. 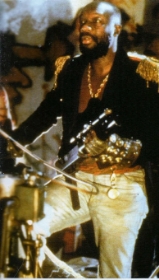 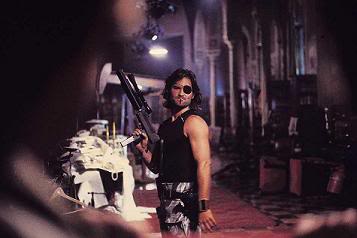 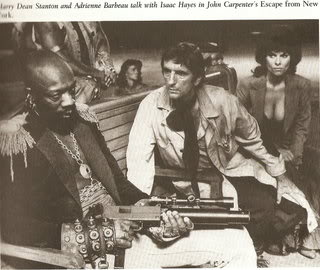 Carpenter also threw in gladiatorial combat in an arena towards the end, to make sure we understood how far things have decayed. Pro wrestler Ox Baker, over 300 lbs. of muscle, plays the huge Slag, the one that Snake must battle. It's also a credit to the set designers & cinematographers that most of this was not filmed in NYC; I never felt I was anywhere else. Some are critical of the pace, which may be too deliberate, and that the climactic action isn't too impressive. I think Carpenter was saddled with a limiting budget - nothing new for him - but he did well with what he had. BoG's Score: 8 out of 10
Trivia From NY: the narration at the start which explains the whole set-up of the city prison is by none other than Jamie Lee Curtis, who starred in Carpenter's Halloween (78); you also hear her voice near the beginning over the intercom, explaining things to newly-arrived prisoners; Pleasence, also in Carpenter's Halloween (78), may seem an odd choice to play an American President; the actor developed a backstory for his character - that he was the offspring of an American diplomat and British royalty... the long-belated sequel, Escape From L.A., didn't arrive until 15 years later, in 1996, and shifted things to the west coast for a similar plot; only Snake returned. In magazine Maxim's Feb.2000 rundown of the 50 best 'B' movies, this one was ranked #5: 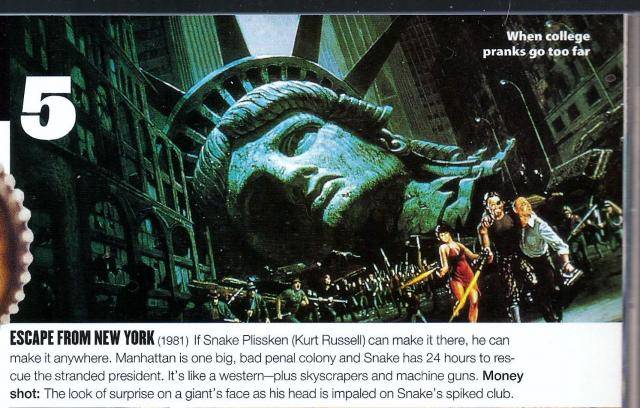