I did see this when it aired on TV in 1975 and obtained a DVD-R a few years ago which was a 2-disc set (the other disc was Planet Earth (TV-74). This was yet another (the 3rd) attempt at presenting Gene Roddenberry's latest vision of a future Earth, focusing on individuals from the present ending up 180 years or so in the future. 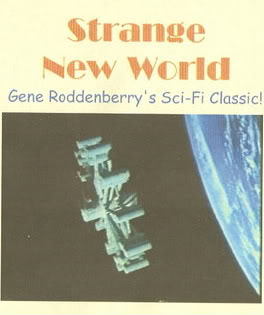 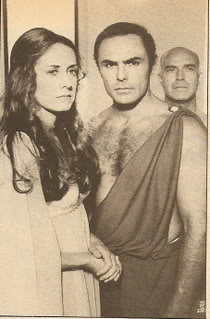 As far as Gene Roddenberry's involvement in this (his previous TV pilot movie was Planet Earth): Roddenberry's name is nowhere on the credits for Strange New World. After a bit of research, I've deduced that he either walked away from the concept & property or sold it off. The actual producers kept the bare minimum of Planet Earth's ideas, such as the name PAX, and rehired John Saxon (who also starred in Planet Earth). Saxon's character in this new movie is not Dylan Hunt, but Capt. Tony Vico. This time, he and two others are kept in suspended animation in an orbiting satellite which is sent on a 180-year trip around the sun just as the Earth is bombarded by a swarm of meteors.

All of this is covered briefly in the beginning with quick shots and a lot of narration. It seemed clumsy to me, like the filmmakers had to cut 15 minutes out and just brief the audience. For example, we are told that these 3 astronauts/chrononauts survived a crash landing back to Earth but none of this is shown. We just see them moving along in their special landrover vehicle. Vico's companions are played by Kathleen Miller and Keene Curtis.

Also, this TV movie is divided squarely into two parts, as if this were 2 episodes of a new TV series just roughly stitched together (I noted a repeat of some of the explanatory narration as the 2nd half of the movie began).
James Olson (The Andromeda Strain; Moon Zero Two) and Martine Beswick are the 'guest stars' in the 1st half; Reb Brown (Captain America TV movies) also plays several clones. This features a futuristic, utopia-style society which hides some secrets...
The 2nd half guest stars Bill McKinney (the hillbilly degenerate in Deliverance) and Gerrit Graham (Demon Seed; Used Cars). This takes place in what used to be a zoo, featuring a couple of feuding primitive societies. BoG's Score: 5.5 out of 10
Further Trivia: I found out (read) that this TV pilot was edited down from 2 hours to 90 minutes for syndication, which may explain the awkward moments I mentioned above. Actors in brief early roles were Catherine Bach and Richard Farnsworth.