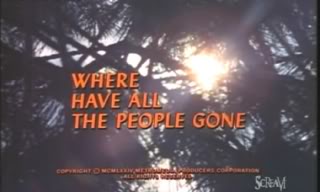 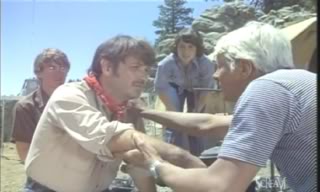 WHERE HAVE ALL THE PEOPLE GONE?  This is one I did see on TV when it first aired and I remember it well. I acquired a double-feature DVD a few years ago, on which this telefilm was paired with, of all films, Embryo, the 1976 theatrical film starring Rock Hudson. 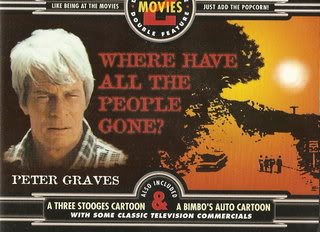 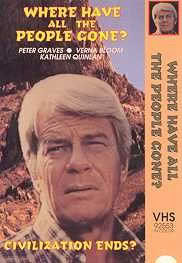 Peter Graves plays the father, Steve Anders; his teenage kids are played by George O'Hanlon Jr. and Kathleen Quinlan. Verna Bloom shows up later as another survivor. They're on a family vacation/camping trip, exploring these caves for some reason. Anders' wife left the trio to go home early just before the 'sun effect' as I call it. The bulk of the story is the trio's (then quartet, then quintet) quest to get home. Automobiles don't work, their electrical systems fried by the effect (though there's a plot twist about this later). There's also another revelation later about the reasons all this happened which may address comments about how this does not seem scientifically accurate. 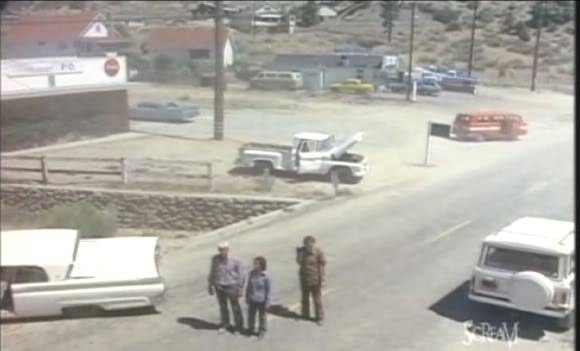 This was a straightforward end-of-the-world sci-fi scenario and a wonder that it's not done more. You don't need the megabucks of the recent I am Legend, for example. Just get rid of most people as the story begins and you're pretty much set. No need for flashy, expensive FX and certainly no need for huge crowds and lots of extras. Some may mention Panic in Year Zero and there are obvious similarities, but a more apt comparison would be something like Five (1951) or The Day the World Ended (1956). There's almost no one left so what you have in most scenes is just emptiness - a landscape devoid of movement, except for the central characters. Oh, there is also some similarity to Day of the Animals - dogs have not been wiped out, let's just put it that way.

I ate this stuff up like sci-fi candy back in the seventies and I still like this particular story. I'd probably seen The Omega Man a year or so before this and my imagination ran rampant as I would place myself in the middle of such a simple yet effective scenario, wondering how I would handle it (in this case, wooing the incredibly cute Quinlan, who is/was about my age, maybe a bit older, was a prominent plot thread in my head). This was a very early role for Quinlan, among her first, and it's no surprise she had a long career after this. O'Hanlon Jr. was also pretty good as the college-age son and something of a young scientist (which serves to forward some info to the audience as the story progresses). There's quite a bit of suspense for a TV film as we all wait to see what the family finds at the end of their quest. BoG's Score: 7.5 out of 10
http://www.veoh.com/browse/videos/category/scifi_and_fantasy/watch/v19538835xHmxDztp