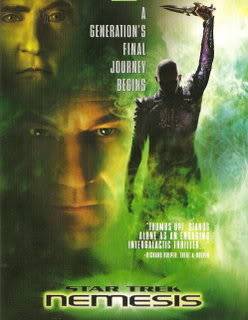 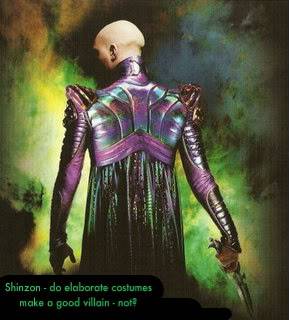 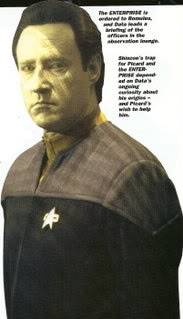 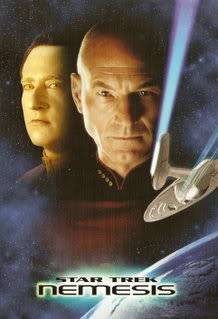 This was the last Star Trek film before the revamp in 2009; it was also the final Star Trek film with the TNG crew, following Insurrection (from 4 years prior).

This isn't as bad as its reputation may suggest (this had the lowest box office gross by far of all the Star Trek films; even The Final Frontier - the turkey of the Star Trek films - if adjusted for inflation, grossed nearly twice as much). I think the usual Star Trek audience had grown weary of the shallow concept as approached by the Star Trek filmmakers, i.e. let's go back to The Wrath of Khan yet again and find a neat villain for Picard & crew to face off against. 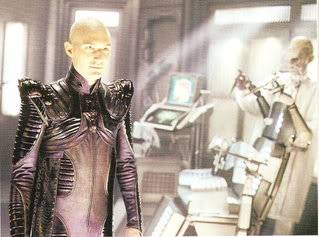 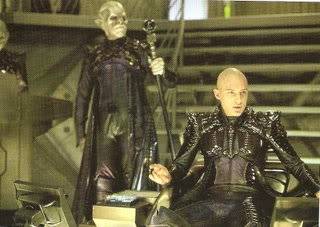 That isn't really the point of the Star Trek franchise, is it? (creating new slick villains for the heroes). No, the point is to illuminate certain aspects of the human condition through the filter of a fantastic, future culture; to find new ways of looking at things; to explore, yes? Instead of going back to the 2nd Star Trek film, they should gone back much farther, maybe as far back as Forbidden Planet from 1956. 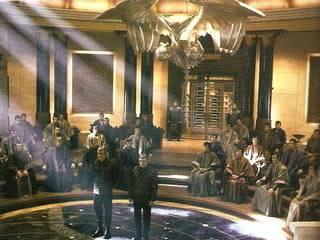 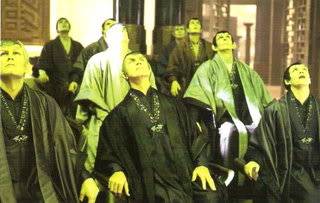 If the point isn't exploration, then the danger arises of a pointless exercise in mayhem and conflict. The new plan here also involved employing a director (Baird) and writer (John Logan) not associated with the Star Trek mythology as previous creators were. This combo did lend a slightly different flavor to a Star Trek story - not really better, just different. It doesn't really feel like Star Trek for much of the film. Certain plot points, associated with earlier Star Trek series and films, went out the window, as if someone was afraid to confront these two. Or, they just couldn't be bothered with such details. 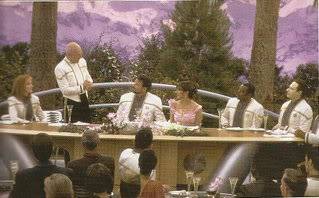 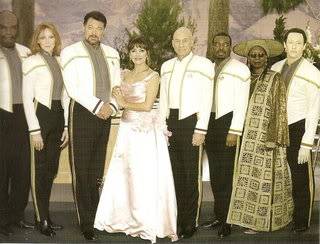 Things seem a bit darker all around in this one. There are moments, such as the early wedding scenes of Riker & Troi, when the customary Star Trek atmosphere remains, but these scenes seem surrounded by darkness and almost a sense of despair. The actual first sequence on Romulus is fairly horrific - longtime Trekkers may feel like they've wandered into another version of the evil 'Mirror' universe, with dark empires and assassinations around every corner. This film first shows us the Remans, whom I always thought would be much like Romulans. Instead, they appear to have mutated/devolved over the centuries due to their nocturnal, troglodyte existence on the always-dark side of Remus; they sure don't look like offshoots of Vulcans anymore (yes, Romulans are essentially just warlike Vulcans). 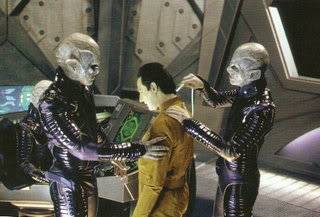 As with much in this film, a more monstrous, frightening visualization than what we would expect in the Star Trek galaxy is stressed in the depiction of aliens. This approach was probably designed to give a Star Trek film some edge in these times of "Matrix"-styled thrills, but I wish they wouldn't experiment so with Gene Roddenberry's vision. I did like the look of the Romulan capital and the senate forum, but these scenes are brief. The surprise cameo by Admiral Janeway was also welcome and very brief. 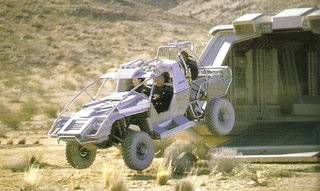 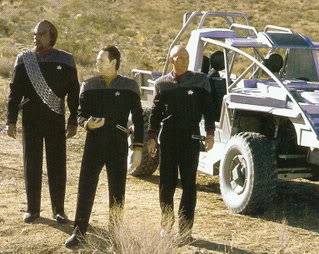 Other experimentation involves a dune buggy-type chase on a desert-type world, with over-exposed photography to give it that alien look (now we're seeing an imitation of Pitch Black - another edgy sci-fi thriller from a couple of years earlier). The crew find another duplicate of Data, B4 (before, ha-ha), and they're all stunned by this discovery, forgetting all about Lore, Data's twin from several TNG episodes. The introduction of B4 is, at best, superfluous. Why not just bring back a befuddled Lore? And just how many duplicates of Data are around? I guess no one realized that the more copies of Data are presented, the more this lessens the character of Data. 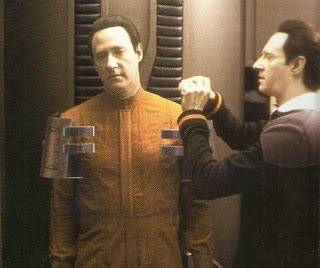 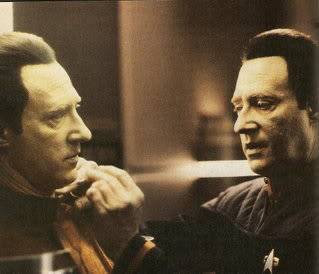 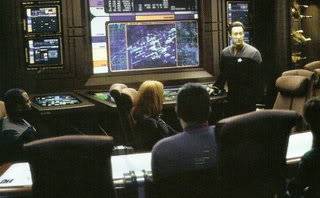 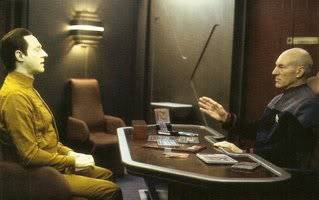 The main threat turns out to be a young clone of Picard (no, he does not look like a young Picard - sorry); this 'Shinzon' has taken over the Romulan Empire in a sudden coup (writer Logan seemed on a Roman head trip, with thoughts of "Gladiator" still swirling in his mind). Now, why would top Romulan officers accept a human clone as their new leader...never mind. The story does kick in, action-wise, in the latter half, with Shinzon's warship, looking like some giant black bug of extremely lethal capability, engaged in an ultimate space battle with Enterprise-E and Romulan ships. As one can tell from the stills, some scenes are, again, so dark, that it's difficult to make out what the key enemy ship really looks like, but that was the method, I suppose. 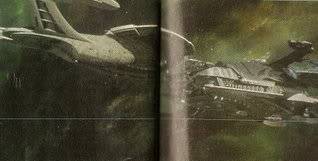 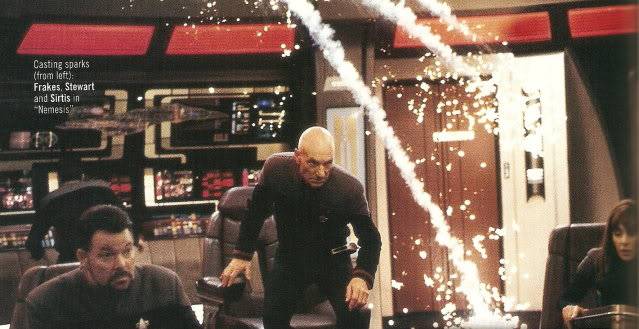 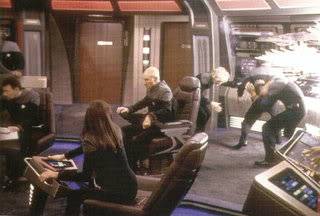 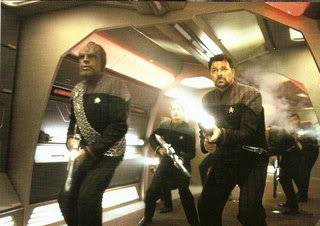 I was surprised but not too disappointed by

Spoiler:
Data's sacrifice; actor Spiner was too old to continue in the role, so even if Data could show up in the 25th century in some future film, Spiner could not. This is a prime example of audiences just having to 'buy into' or 'letting go' of the fact that androids should not change in appearance as a decade or two goes by.

It would be very startling, for example, if one watched the TNG pilot Encounter at Farpoint back-to-back with this film. One might conclude that something is really wrong with the android Data in Nemesis after such a viewing session. The android seems a bit... puffy in this film.

Spoiler:
So, they scrap him. Makes sense. But, they introduce B4. 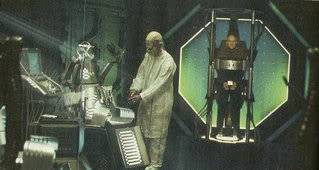 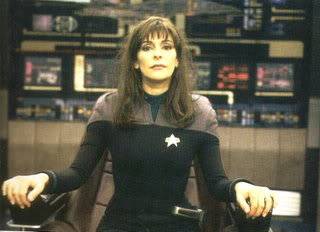 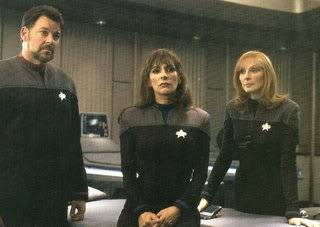 There's also a subplot about Troi getting psychically raped by Shinzon and his viceroy, for reasons I was unclear about. I guess it was just another avenue to include some creepy scenes. Oh, and, an excuse for Riker to get a bit medieval on the villain towards the end. As an aside, didn't Picard have a 'thing' for Dr. Crusher (Gates McFadden) during much of the TNG series - you know, the barely suppressed sexual tension stuff? Now that might have been interesting - having Shinzon focus on Beverly in a less-than-romantic fashion, on a more primitive level.
But, I guess that's just me. BoG's Score: 6.5 out of 10 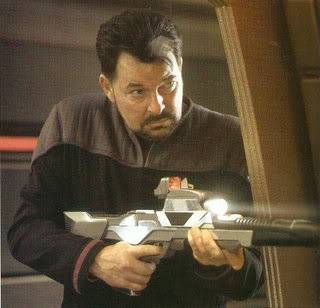 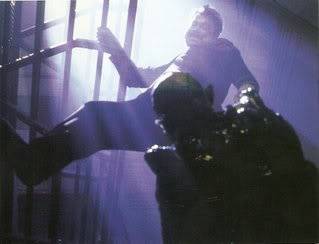 As with most of the Star Trek films, rules hampered the proceedings: they had to trim this one down to under 2 hours, getting rid of many character-building scenes, but I would have left the deleted scenes in - one may as well have gone out in style with a 140-minute epic, Wesley Crusher and all. The official website: STAR TREK NEMESIS at STAR TREK.COM 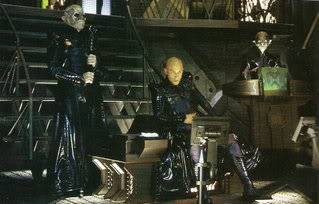 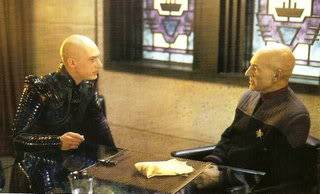