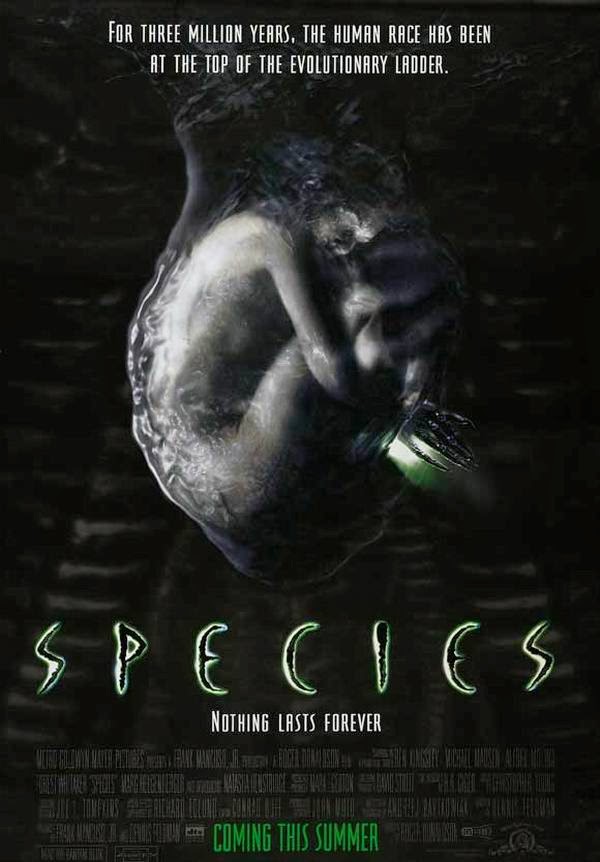 SPECIES was the first of a series of films which explored the invasion of Earth by an alien species in a different manner from which we are usually expecting - no alien spaceships or flying saucers in this one. SETI turns out to be the culprit; in response to our messaging into outer space (begun in the early seventies), some alien intelligence has sent us return information, a method to combine alien DNA with ours. So, we do it. 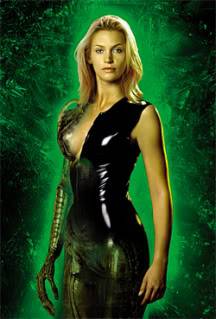 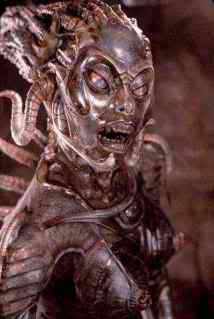 In a scientific installation in Utah, headed by Kingsley's character Xavier Fitch, 100 eggs were so experimented with; only 7 worked; 4 of these deteriorated; of the remaining 3, 2 were frozen and one was allowed to mature. It matured quickly. In about 3 months, it grew into what looks like a blonde, 14-year old girl. Here's an early trace of humor: Fitch decided to make it female because he felt it would be less aggressive. The joke's on us, huh? 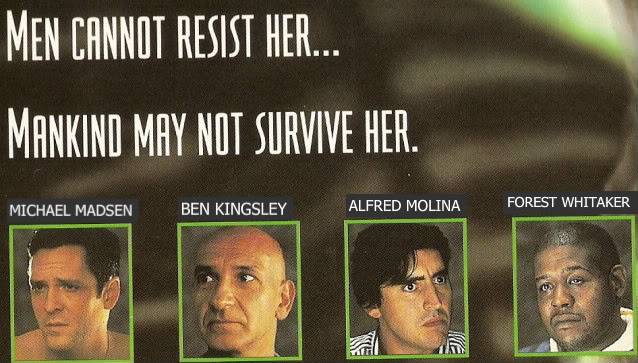 This method of alien contact is also similar to the film Contact (1997), though the 2 films are very different otherwise. And, it's not really new - we can go back to the lost British TV serial, A For Andromeda in 1961, which had the same premise. So, the filmmakers took that premise and grafted it onto a sci-fi thriller which visually resembles the horrific aspects of Alien (1979) - almost all alien invasion thrillers since 1979 have been influenced by Alien; this one even employed H.R.Giger's designs, so it's almost like an unofficial sequel to the Alien films (check out the nightmare train scene - do you see familiar aliens?).

In this plot, the alien girl escapes and very soon, after a cocoon sequence, matures into actress Natasha Henstridge, a striking blond in her mid-twenties. She is compelled to find males to mate with so she can reproduce. Fitch puts together a team of 4 other specialists to track her down. 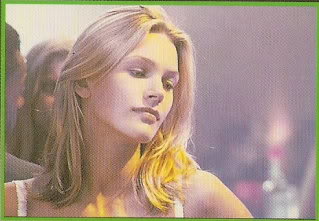 So, what we have here is a wild take on the 'coitus interruptus' mentality - the team needs to stop the half-alien woman from having sex with any human male. There is an inherent absurdity to such a scenario, also recalling another film about female sexual predators, the campy Invasion of the Bee Girls (1973). In fact, much of the film revolves around the notion of females being the aggressors in sexual activity regardless, as we see in glimpses of the local dating scene; this even extends to the team, as the lone female member (Marg Helgenberger, some years before her big role in TV's CSI) is attracted to hunter Madsen and eventually has her way. In Syl's case (Syl is the female alien), men fail to survive her mating attempts - yes, it gets bloody. 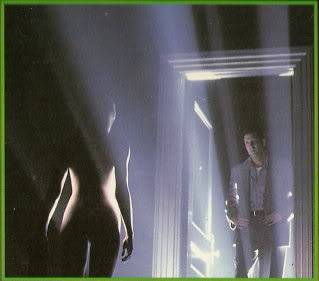 Though not really explained, the half-alien female sometimes changes into her 'true' form, a Giger-designed monstrosity; she has superhuman strength and remarkable regenerative ability. The story is well-paced, with some interesting plot twists and entertaining characters thanks to decent acting. Also, if you admire the nude female form, notably Henstridge's, there's plenty of that.
This first one wasn't too bad, though it becomes perfunctory in the last act. BoG's Score: 6.5 out of 10
The sequel, Species II (1998), was a grotesque, sleazy sci-fi sex romp; Henstridge returned due to, I believe, one of the frozen eggs I mentioned above. Then there was the direct-to-video Species III and a 4th one which tried to take it in a different direction.