#12b: I OF NEWTON written by Alan Brennert
based on a story by Joe Haldeman; Directed by Kenneth Gilbert
This segment was another very short one, at about 8 minutes. But, wow! This was an intentional comedy, a 7-minute running joke that ends with a whammy of a punch line. This one was also perfectly executed, a classic combo of deft direction and pitch-perfect acting, by the only two actors of the piece, Sherman Hemsley and Ron Glass. This segment also combines many aspects of mythology with some hard science fiction - an eclectic mix, to be sure. 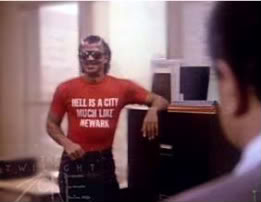 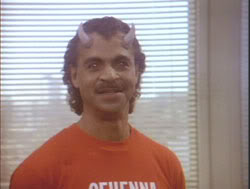 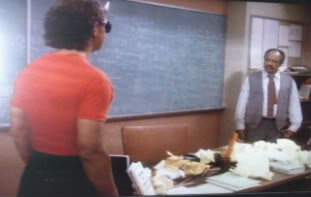 The plot concerns a teacher (Hemsley) who, in the middle of trying to solve a complex math problem, inadvertently summons a demon (a.k.a.the Devil, played by Glass) who has come to claim the professor's soul. There are rules, however, to our universe and the professor has an 'out': he can ask the demon 3 questions about the extent of the demon's power; after he gets the answers, he must either ask the demon a 4th question which the demon cannot answer or set a task for the demon which it cannot perform.

If the professor succeeds at stumping the demon, his soul goes into 'turnaround' and he's a free man, so to speak. Unfortunately for the mortal, no one has succeeded at this in about 2,000 years. For one thing, the demon's power seems unlimited. Much of all this invention must be traced back to the original story by Haldeman (The Forever War).

I was really taken by the style and approach of the episode as it progressed. Most fans of the segment remember the changing slogans on the demon's T-shirt (about every 30 seconds, the wording changes). But, I was really fond of all the 'slips' of information emanating from the demon as he gleefully taunts the professor during their exchange. This includes a few well-known sci-fi concepts, such as an alternate reality in which Germany won WW2 or the ability to travel to another galaxy with the speed of thought.
The demon also explains how some other demonic dimensions work and what is actually done with souls - I admit, I've always been curious about this. The dialog is consistently witty and acerbic, but also serves to convey a ton of info within such a short time frame. And, the finale, when we learn who wins this round, is just simply terrific. And a good tip for the rest of us. Just about the most entertaining 8 minutes of TV ever! BoG's Score: 9 out of 10