Horrors From Screen to Scream

Horrors From Screen to Scream

HORRORS FROM SCREEN TO SCREAM by Ed Naha 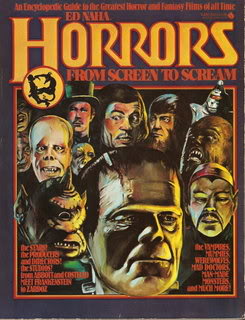 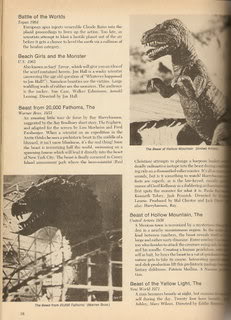 Published by Avon Books, 1975 * Softcover * 306 pgs.
This sounds like a reference on horror films, but it also covers all science fiction & fantasy (at least it seems like all) since the film genres began (circa 1910 or so) through 1974. The last films covered, released in 1974, are Andy Warhol's Frankenstein, Arnold and Zardoz. The listing is alphabetical, with each letter of the alphabet beginning a new chapter of sorts. You can see a typical page above - yes, it has dinosaurs - it's a simple, straightforward format: each title is followed by the releasing studio & year underneath in italics, followed by a plot summary and brief commentary. Then, the main actors are listed and the director's name. The photos, in b&w, are pretty much on every other page.

This was probably the first reference book on science fiction I purchased. I thought it was a terrific read back then and still do. It really opened up my eyes (and mind) to the wide world of Sci-Fi and Horror. Oh, I'd seen quite a few of the films by then on TV, on such shows as 'Creature Features' Saturday nights, hosted by Bob Wilkins and then John Stanley (who wrote his own reference tome later). But, about half the films in the book I had never seen at that point and quite a few I'd never even heard of until then. There are probably more than a couple I'm still waiting on. Back then, in the 2nd half of the seventies, invariably a night would come along when one of these unseen films would be broadcast. Woo, I'd think, is that in the book? (of course, it was). All right! Time to see it!

The book also has a few pre-eminent famed genre actors listed (such as Boris Karloff & Chris Lee), usually devoting a page to their bio (not too many of these - Karloff gets the biggest write-up and pages of photos), directors (even less), Ray Harryhausen of course (just half a page) and even a couple of studios (Hammer films, for example). Ed Naha, who grew up on the Famous Monsters of Filmland magazine and 'Shock Theater,' wrote many books after this, but, in some ways, this is his best, a pure piece of work. You can find it on Amazon.com, probably sold by guys who, like me, bought it over 30 years ago.