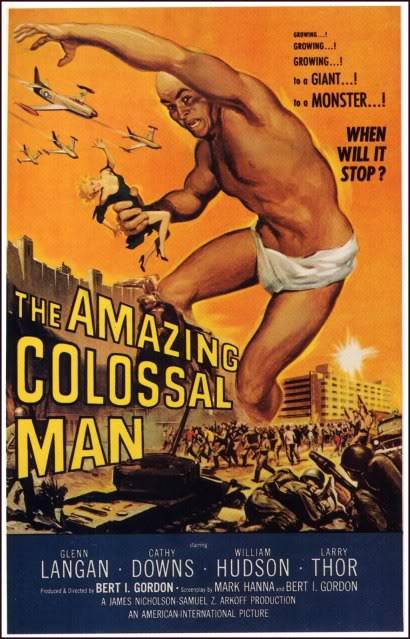 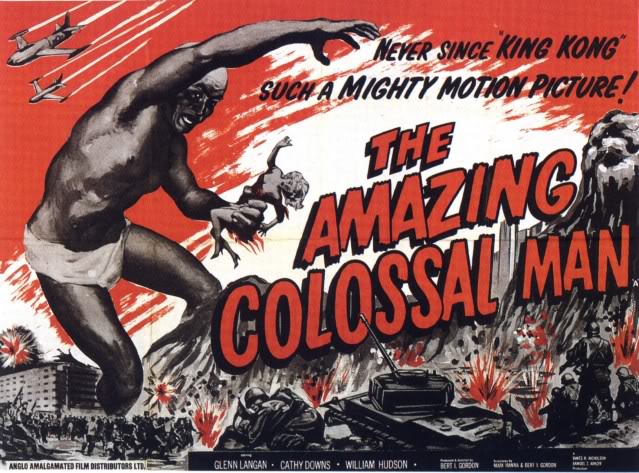 Here is this pretty famous 'giant monster' picture from the fifties, unusual in that rather than the expected giant animal, such as insects or even apes, it's a human male. This was director Gordon's cash in on The Incredible Shrinking Man of earlier in the year. As Bill Warren mentions in "Keep Watching the Skies", this may very well be Gordon's best - that's not saying all that much, but hey, every filmmaker has to have his own best movie, eh? 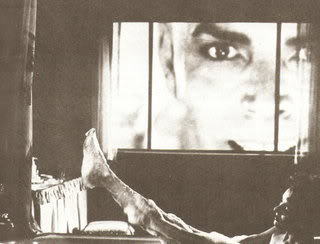 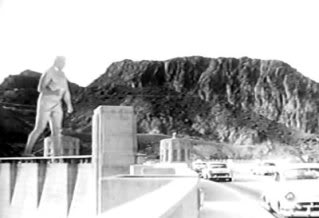 This one moves along pretty well and is usually interesting. The title character starts out as Colonel Manning, an overly heroic soldier who gets caught in the blast of a new Plutonium bomb. This burns off most of his skin. You'd think that would be the worst of it, but God or cosmic forces tend to play games with certain unlucky people in such films (when it involves new atomic weaponry, especially). Manning grows back the skin overnight and then starts to...well, you know. The tragedy here, imposed on the audience without much subtlety, is that Manning was a good man, even heroic; yet, this is his reward. His fiance doesn't have a good time of it either. He quickly develops a dark sense of humor and further problems - this film just piles 'em on this poor guy. 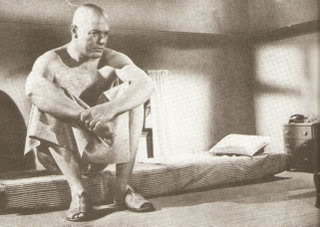 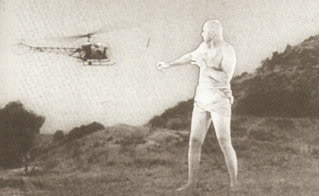 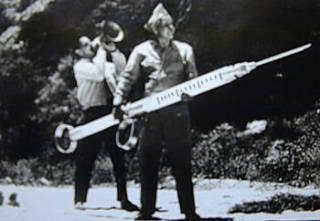 This lacks those moments of transcendence and poetic introspection in the superior Shrinking Man film, but Gordon gives it a good try and the FX are much better than the awful Attack of the 50-foot Woman a couple of years later, even if there is a slight see-through quality to the giant man in some scenes. One thing I've noticed in watching a film like this is that Gordon obviously is just copying elements & dialog of previous films, stuff he'd seen, I suppose, a year earlier - the scenes come across as very clunky and unintentionally humorous, as if the actors are just aping older scenes, in older movies. Which they are, I think. BoG's Score: 4.5 out of 10

As seen here, accomplishing such 'giant' FX is not too hard: 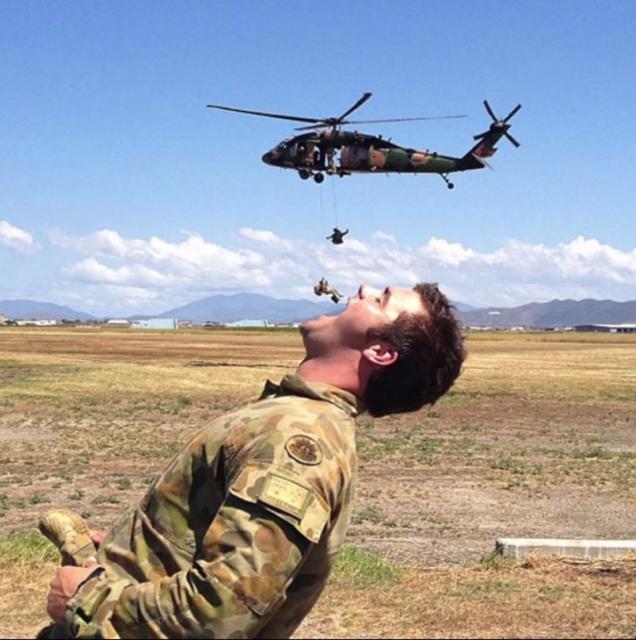 One other thing I thought of is the striking similarity between the 'origin' of the Colossal Man and that of the Hulk in the Marvel Comics. When Stan Lee or someone else writes about the origins of the grey-then-green monster hero of the comic books, the influences cited are usually Dr. Jekyll and Mr. Hyde and/or the Frankenstein story.

However, when I saw Colonel Manning running towards the bomb at that test site in The Amazing Colossal Man, I was reminded of the very similar scene of Bruce Banner running towards the Gamma bomb in the first issue of the Incredible Hulk; that issue was published in 1962, 5 years after this film. Coincidence? In the comic book, Banner eventually (not immediately) transforms into a hulking giant, with lowered intelligence & a nastier disposition. In the updated TV series and later movies, the origin for the Hulk was changed somewhat, but the original is very similar to the Colossal Man's. In the Hulk film of 2003, the Hulk at some points grew to a size of about 20 feet tall, making him even more similar to the Colossal Man. 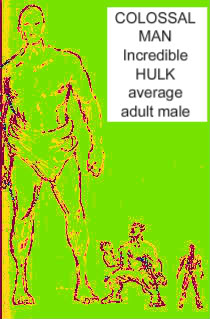 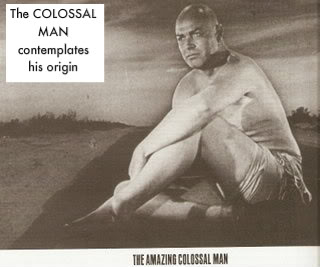 Some more bits of trivia: going by memory, in the film, the Colossal Man is stated to be growing at a rate of 8 feet per day. So, he would reach his final height of about 50+ feet in about a week. When we first see him at a giant size, he is said to be 18 feet tall. When he wanders around Las Vegas towards the end, some state he is closer to 60 feet tall. This does seem accurate - most of the FX hold true to this estimate (unlike Attack of the 50-foot Woman, where her size does not seem consistent scene-to-scene).

There was a film which preceded these by a bit and one I forgot about: The Cyclops (1957) - the giant in that one resembles The Colossal Beast, who appeared in the sequel to The Amazing Colossal Man. Small wonder, since The Cyclops was also produced & directed by Bert I Gordon! Gordon was really consumed by the thought of giants, apparently. That giant, the Cyclops, is said to have been 25 feet tall, a relative shorty.