THE LAST VOYAGE of the STARSHIP ENTERPRISE
(part of a Saturday Night Live episode, first broadcast on May 29, 1976)
- written by Michael O'Donoghue
starring JOHN BELUSHI as Capt. Kirk * CHEVY CHASE as Spock * DAN AYKROYD as Dr. McCoy
and ELLIOTT GOULD as Goodman * with LEO YOSHIMURA as Sulu * DORIS POWELL as Uhura
and GARRETT MORRIS 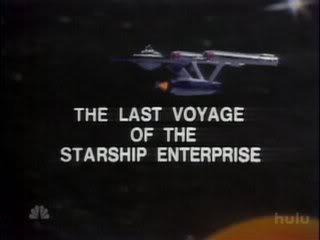 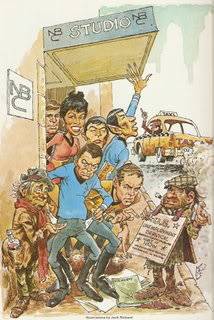 This is the now-famous skit enacted by the Saturday Night Live players, making more fun of the network which canceled TOS than the show itself. The skit begins on the bridge of the Enterprise (a recreation, naturally), with Spock calling Kirk to the bridge as an unidentified vehicle is detected. The viewscreen reveals the vehicle to be a maroon 1968 Chrysler limo. None of Kirk's actions such as trying evasive maneuvers work and soon McCoy rushes onto the bridge, warning Kirk that the aliens have shown up, that they "...sort of stepped out from behind the curtains." 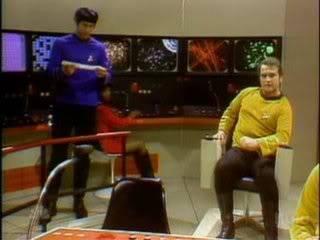 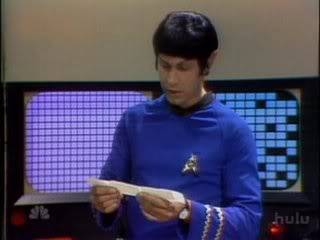 The 'aliens' turn out to be Herb Goodman (Gould), head of programming for the network, and his assistant (Morris). Goodman informs the crew that the show has been canceled due to low Nielsen ratings. The bridge crew's phasers don't work; neither does Spock's Vulcan nerve pinch.
A production crew suddenly starts to take the set apart. The Enterprise crew/actors depart one-by-one until, true to form, only Kirk is left, defiant to the end.
The whole thing is just over 11 minutes. 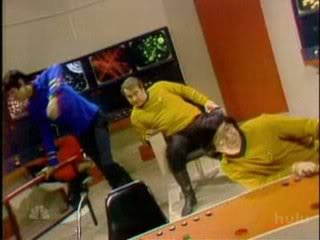 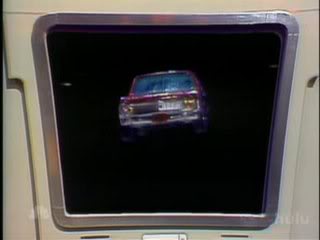 With all the Kirk impersonators to have come along in the past 30 years (actor Kevin Pollak does a wickedly-good Shatner-as-Kirk), Belushi's interpretation doesn't seem so great nowadays, lacking a subtlety in the comedy, but back then it was an eye-popping satire on the Trek legend because it was hardly ever done, so long ago in the seventies. Chase captured some of that Spock logic, while Aykroyd was suitably flustered as McCoy. Yoshimura as Sulu had about as much to do as George Takei on the actual show, voicing space distances ("0.4 light years, sir.."), but he was very stiff & one-note. Gould was Gould, of course, just excellent. 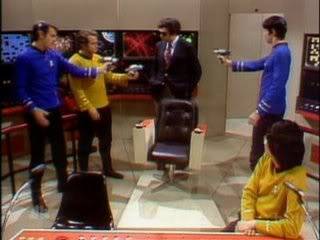 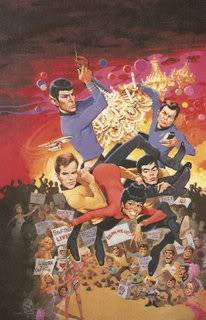 The FX and the set were as cheap as can be, of course, but it was startling to see the TOS uniforms on the comedians in the mid-seventies. Remember also, that this really was live; Chase messed up at least one line: as written, the line was "To kill them without warning..."; Chase stumbled and said "To kill them without.. anything..." Aykroyd also supplied Scotty's voice on the intercom. You might have to be a certain age to appreciate Kirk's/Belushi's final line; he says "Promise;" this refers to a margarine commercial Shatner did later, where he uttered that line.

Gene Roddenberry himself wrote an enthusiastic letter to Gould after seeing this, approving of the parody - perhaps because the piece pointed out the stupidity of NBC and its executives rather than skewering the show's creator, writers, directors and actors. The skit is on the first season DVD release of Saturday Night Live, on the last disc.