One of the best, most memorable episodes and possibly my favorite Lost in Spacer, because it dispenses with the usual clownish tone, presenting the rare somber, grim and very atmospheric offering of the season. This was the 'parallel universe' storyline from Lost in Space and, like most of these from various series (Mirror, Mirror from TOS for example), it's superior to most episodes, probably because it features doppelgangers of the regular characters - the darker side of such - and is instantly interesting just due to this variation. 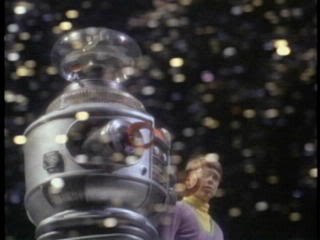 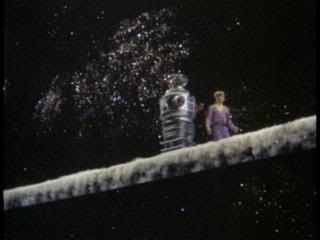 There is still some of that nonsensical stuff - it begins with Will reading some ancient book about mirror universes which Smith scoffs at; by strange coincidence, two beings from just such a shadowy, mirror world are planning their intrusion into the 'regular' world. The opening between worlds occurs, however, when John Robinson conducts an ill-advised energy experiment; his evil duplicate pops up and drags John back to the mirror world. Will & Robot eventually follow but they end up bringing back the 'other' one (also played by Guy Williams). Only the Robot has suspicions as the other John Robinson behaves in a rather rude manner towards the rest of the group. There's also an unshaven double of Don and one more surprise towards the end. 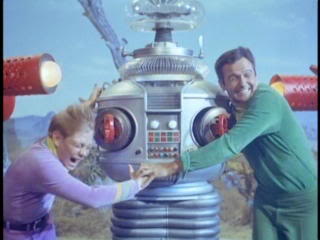 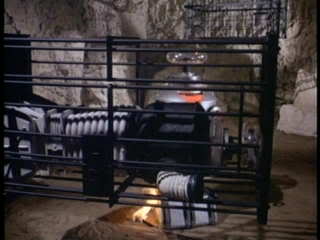 This episode has quite a bit of tension and suspense, helped by the direction and set design - there are unusual camera angles, surrealistic sets, a gloomy tone thanks to strange storms (an imbalance when one person is in the wrong universe) and even some existential thoughts ("Aren't we all [prisoners]," the evil John says at one point, "...of our crimes and weaknesses."). Especially eerie is the depiction of travel in-between dimensions, I kind of pathway suspended in space. Also strange was the Robot's behavior here, as it seemed really prone to panic and even stammers at a couple of points; it's not too comical, however, suggesting that events were so odd that even his computer mind was thrown for a loss. BoG's Score: 7.5 out of 10

NOTE: though the appearance of doubles seemed unusual at this point, there were more doubles of the entire group in the very next episode - L.i.S. was on a roll...
Lost in Trivia: besides Mirror, Mirror, TOS also aired the episode The Alternative Factor, which, like The Anti-Matter Man, featured the concept of an anti-matter alternate universe.