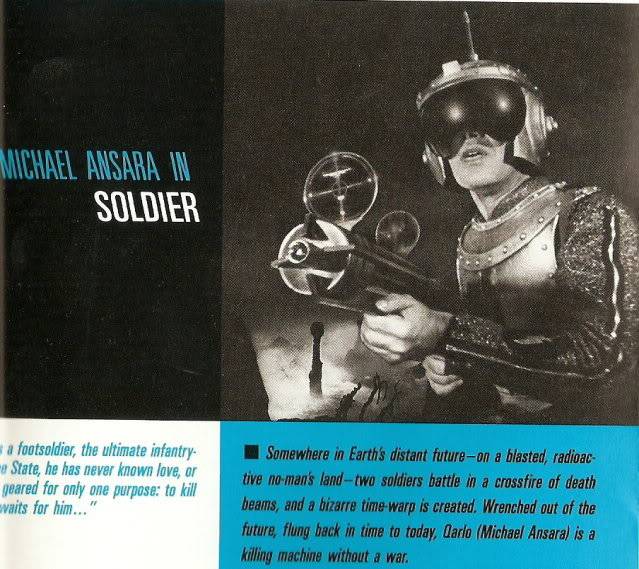 Here then we have the Outer Limits series realizing its potential in presenting solid, pure science fiction concepts & stories - as potent as can be possible in the low budget format of sixties television. This is courtesy of writer Ellison, who would soon offer Demon With a Glass Hand as another episode and who would, in later decades, have an impressive rep in sf circles (though he himself never saw himself as a "science fiction writer"). But, what Ellison does is think things through for stories such as this; he works it all out, all these little details that add up to, in some cases, more than the sum of its parts. The soldier from the future, Qarlo (Michael Ansara), speaks in a slang of the future, but it's still English; it sounds like gibberish when we first hear it, but he is indeed just giving his name, rank and serial letters. 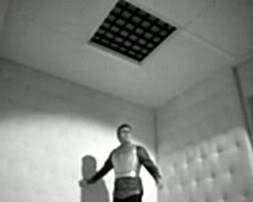 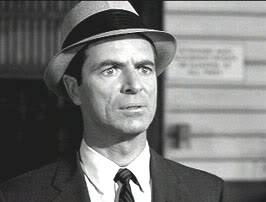 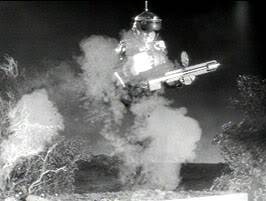 It's later established that Qarlo is from about 1800 years in the future (the method here stretches things a bit; Qarlo just draws some circles on a piece of paper and these are analyzed to represent the positions of stars in our galaxy in that future). Raised from birth to be a robotic soldier, knowing no other life, Qarlo has no recognizable human traits like warmth and compassion; he is all just anger & hostility. A compassionate philologist (Lloyd Nolan) takes Qarlo under his wing and tries to teach him the rudiments of polite society. This would take a long time and they do have a few weeks; but, Qarlo's enemy soldier has also been pulled back through time; he is represented as being stuck between two time periods the whole time that Qarlo is getting acquainted with the 20th century, and it's only a matter of time before he breaks free. 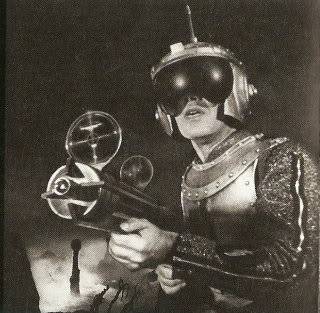 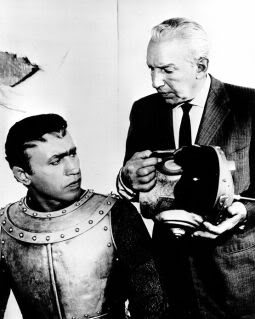 The episode has these now-typical strange or quixotic O L moments: rather than have the enemy soldier simply arrive at a later point than Qarlo, he is depicted as halfway - his upper body - in the present, with his legs still stuck in a timeless limbo (keep in mind, this lasts for weeks). In a late scene, after the philologist has taken Qarlo into his home (placing his wife & kids in terrible danger, I would think), the daughter bars Qarlo's way in the kitchen, as if testing him; Qarlo raises his arm to strike as the scene ends abruptly. Tim O'Connor also has a role as a government man who has his doubts about the whole effort. All the actors are excellent, with Ansara born to play these types of roles. BoG's Score: 8 out of 10

Outer Trivia: this episode had elements which were copied by the presentation of a similarly grim future in the film The Terminator (1984); note how it's established in this episode that cats aid soldiers in the future via some mind link; in The Terminator, dogs help human soldiers; Ellison sued and won. There were also similar 'perfect soldiers' in the films Universal Soldier (1992) and Soldier (1998). 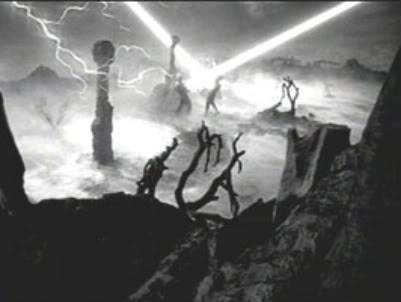 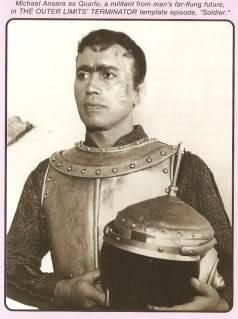 Star Trek TOS actor alert - Ansara would play Kang the Klingon in the episode Day of the Dove.