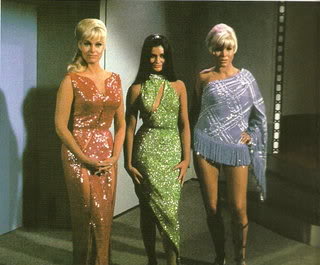 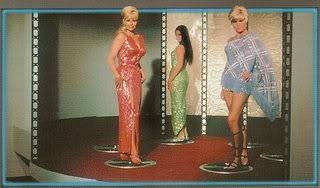 Ah, yes, the women - the women of Star Trek.
This was the earliest indication of what the show would soon be known for - pulchritude 23rd-century style - though this episode would end up having a slightly subversive take on feminism and the female sex. Also, this episode features the first appearance of Harry Mudd, scoundrel of space, a con artist whose cargo are three lovely ladies (played by Karen Steele, Susan Denberg and Maggie Thrett). He next showed up in the episode I,Mudd (in the 2nd season) and even a cartoon version popped up in the animated series in 1973, in Mudd's Passion. 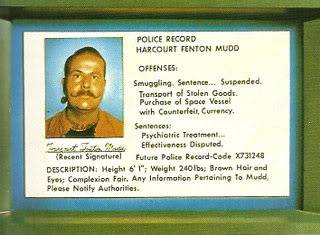 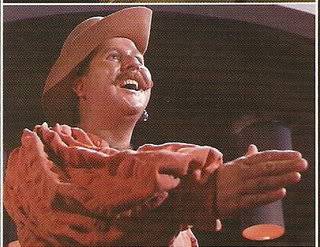 Mudd is his name: I was never a big fan of this over-the-top character like many other Star Trek fans; of all the characters to bring back for another episode - they chose this oaf with the huge belt buckle, a throwback to the era of stylish pirates with big earrings. Sure, he can be amusing, but in small doses; after 10 minutes of listening to his hyperbolic nonsense, you want to throw him in the brig to shut him up. He sort of reminds me of the typical characters encountered on the more silly Lost in Space TV show. Roger C. Carmel, though a good if flamboyant actor, also tended to be something of a ham and couldn't resist some over-the-top scenery chewing. 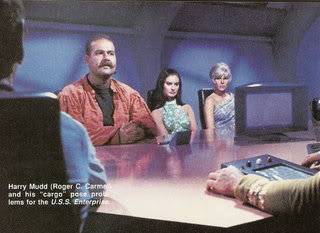 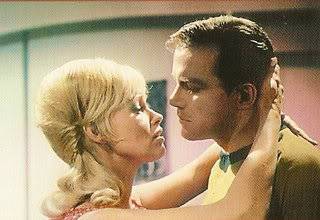 This is one of the weakest episodes of the first season, slow going and uneventful, and, being also one of the earliest, probably shows that the show was still finding its footing. There's a bit of mystery surrounding the three women, who have an odd effect on all the male crew (except Spock, who looks on bemused), causing involuntary arousal. I was more interested in the early use of the transporter at the beginning of the episode, when Mudd's ship is destroyed, but the women had not yet transported to safety on the Enterprise. For a few moments, there's a question as to whether they would be. This means, for a few seconds, they were neither dead or alive, in some limbo, and it all depended on Scotty's and Spock's deft handling of the machinery. This scene would mirror similar ones involving transporter use in later episodes. 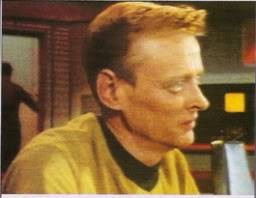 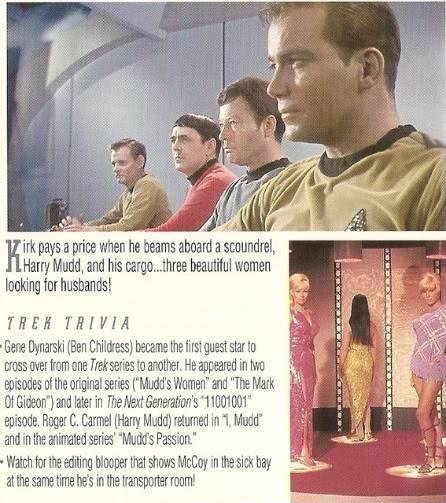 Towards the final act, our beloved starship is in danger of spiraling down to its destruction on the planet it orbits, similar to the much more effective The Naked Time episode made close to the same time. But, there's no real urgency. There's no sense of actual tension during this episode. Mostly, the captain and his crew are irritated by Mudd and perplexed by the women - that's pretty much it. The entire plot seems somewhat beneath Kirk and his ship to deal with, including the subplot about some possibly illegal drug (drug-dealing would later be classified a no-no in Roddenberry's vision of the future).

BELOW: the remastered long shot version of the mining colony on the planet to which the Enterprise eventually arrives 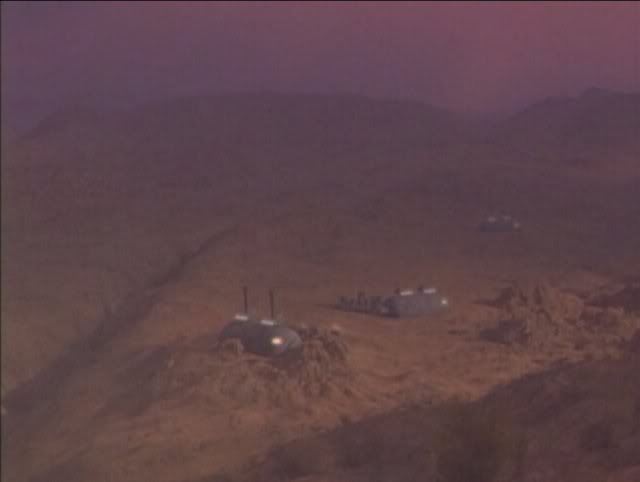 However, promisingly, Kirk is all business in this episode, with no time for romance. Shatner must have understood this early that he must project professionalism and resolve - he was more serious in the first season, compared to the later ones. There is one great exchange between Kirk & McCoy as they conjecture on the mysterious aura of the women and at least one fine performance from guest star Gene Dynarski as one of the miners, Ben Childress, in the 2nd half of the show. BoG's Score: 6 out of 10

Classic Trek Quotes:
Kirk: "Is it that we're tired, and they're beautiful? And they are ... incredibly beautiful."
McCoy: "Are they, Jim? Are they actually more lovely, pound for pound, measurement for measurement, than any other women you've known? Or is it that they just ... well ... act beautiful? No, strike that, strike that."
Kirk: "What are they, Bones?"
McCoy: "You mean are they ... 'alien illusions'? That sort of thing?"
Kirk: "I asked you first."
McCoy: "No. Any alien smart enough to pull this would be smart enough to keep my medical scanner from going 'bleep!'"
Kirk: "I don't follow you."
McCoy: "I don't either."


Mudd: "Blast that tin-plated pot!" (referring to the computer)