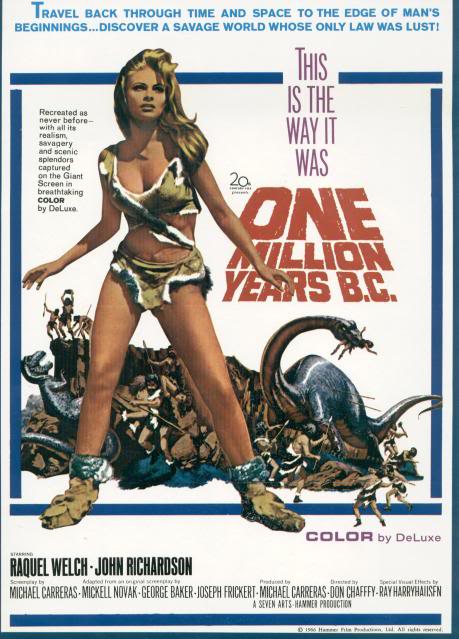 Special Visual Effects by RAY HARRYHAUSEN
This is a HAMMER Production (its 100th - Not Really, but so they Say)

I don't need to go into the most famous virtue of this film, since a picture is,
at times, worth more than a couple of hundred words: 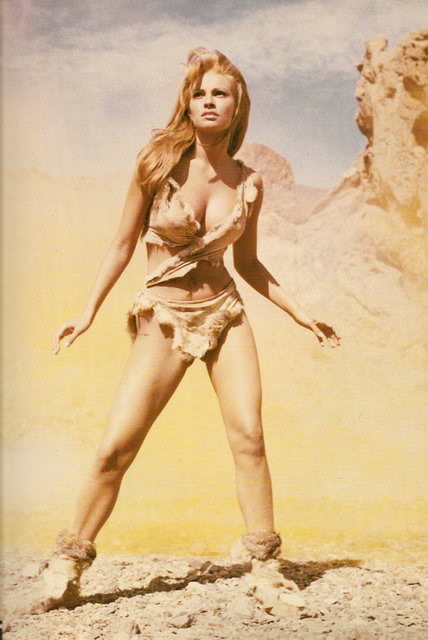 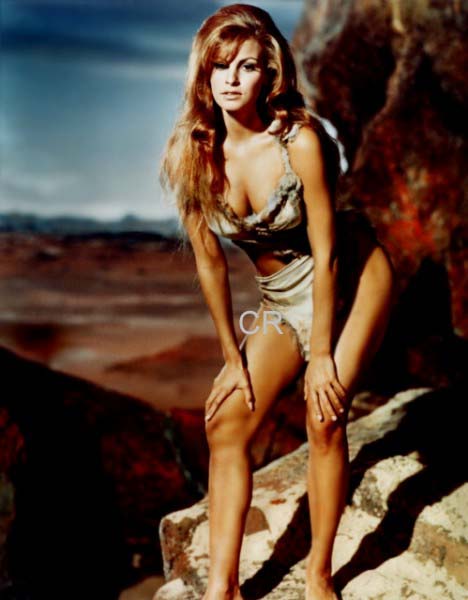 The sequel, WHEN DINOSAURS RULED THE EARTH (1970), is in the 1970-1973 section. Though this is one of the most famous dinosaur films, familiarity with the poster of Welch far surpasses knowledge of the film itself; the poster is iconic and sort of represents what the sixties were about, much like Marilyn Monroe represents the fifties. This is a REMAKE of the 1940 film, which was titled simply One Million B.C. 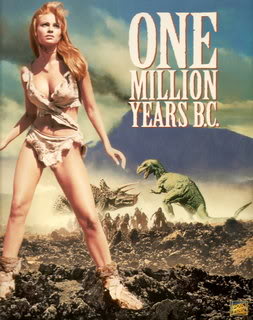 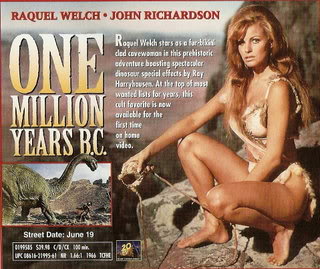 This film of supposedly prehistoric times kind of wants to have it both ways. As indicated by the title, it doesn't really follow the precepts of creationism, that Earth was created about 6,000 years ago. Yet, the biblical-like narration in the beginning speaks of a young world. This goes against the widely-held scientific perception of the Earth being at least 4 billion years old; hence, this would already be an old world, if following that science, even if it did take place a million years ago. Also, actual cavemen such as we see here probably existed closer to 15,000 years ago (as shown in the recent film, 10,000 BC, which had its own problems, but we won't go into that here). 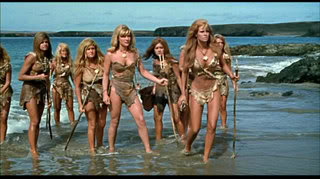 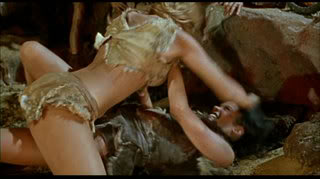 Of course, the other problem this film represents for teachers and scientists is the depiction of dinosaurs alongside cavemen-humans; according to latest evidence, the two sets of life are separated by 65 million years. Now, for those who need to explain this discrepancy, we can postulate an alternate Earth depicted here. Anyway, Harryhausen and Hammer Films didn't make the film for scientists. I don't think they made it for fans of talky pictures either. After the opening narration, get ready for no further English spoken during the rest of the film. This film, therefore, is a pretty good exercise in pure visuals, allowing pictures (much like drawings on caves, uh?) to tell the entire story. There is a caveman language, but it's very limited. 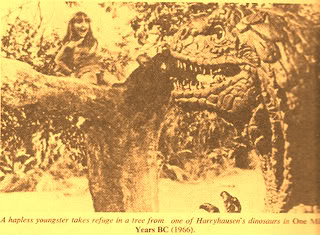 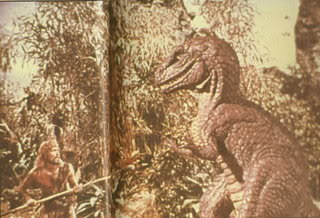 BELOW: Comparison between this film's key caveman-dinosaur battle and the 1940 version: 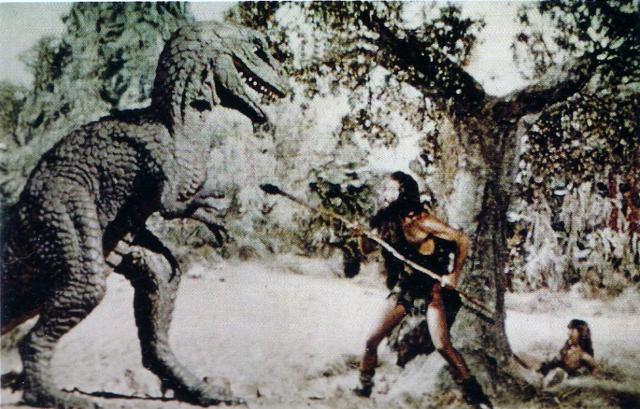 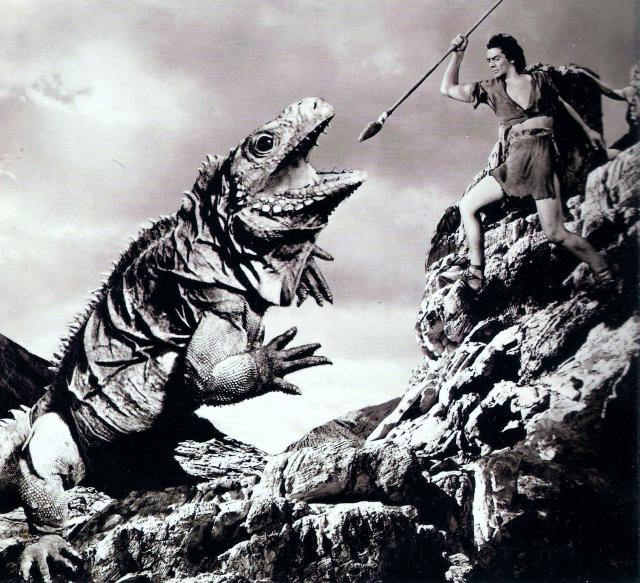 There is a plot, believe it or not. The story begins with a primitive tribe of that era, lorded over by an older but still very tough caveman (Robert Brown). The film shows us that such traits as compassion have not been developed yet; elderly members of the tribe must fend for themselves and if they don't, no one sheds a tear on their passing; it's the way of life.  The ruler has two sons (Richardson and Percy Herbert), who don't get along well, being close to a version of Cain and Abel. Actually, the father doesn't get along very well with the sons either; it's all about plain survival - the more brutal you are, the better you survive. Tumak (Richardson) gets into an, uh, argument with his dad and is cast out. Tumak wanders across the desert and barely makes it to the sea, where a more civilized tribe lives. There, he meets Raquel Welch. You got it: it's boy meets girl in the land of dinosaurs. 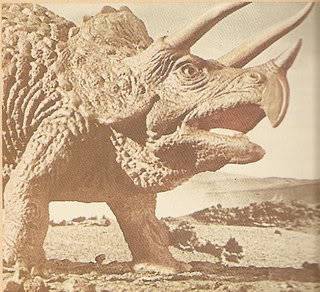 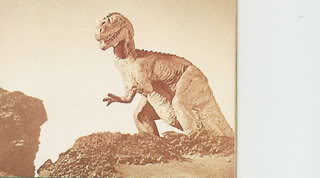 And, boy, there are a lot of dinosaurs in this one. In many ways, this is prime Harryhausen glory. There are a couple of enlarged beasts, a lizard and a spider, near the beginning, but otherwise it's Harryhausen unleashed! We get a view of a brontosaurus walking by, a giant sea turtle, a classic battle between a Triceratops and Ceratosaurus (like a T-Rex), a Pterodactyl giving Welch a lift and, most impressive, the attack by an Allosaurus on a tribe. This is a lengthy sequence in which a couple of tribe members are killed, culminating in Richardson's innovative killing stroke. I actually felt sorry for a couple of the dinosaurs in this film; Harryhausen gave them - their movements - such a familiar, distinctive look, that when they perished, howling in pain, I took pity on them, as I would on any animal dying in pain. 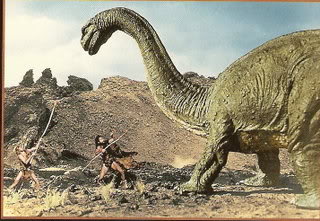 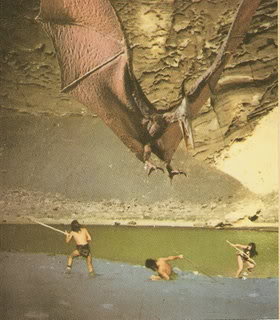 On top of all this, there's a cavegirl fight between Welch and Martine Beswick! Beswick already had experience in this from her gypsy-girl fight in FROM RUSSIA WITH LOVE (1963). Classic, baby, classic. The whole thing climaxes with one of those volcanic explosions; remember, the Earth is young here and these happen a lot, I would guess. We get some heavy-duty scenes of carnage at the end, so much so that I'm surprised any of the tribe members survived. BoG's Score: 6.5 out of 10
BELOW: an interesting comparitive study of Welch and Ursula Andress in SHE (1965). 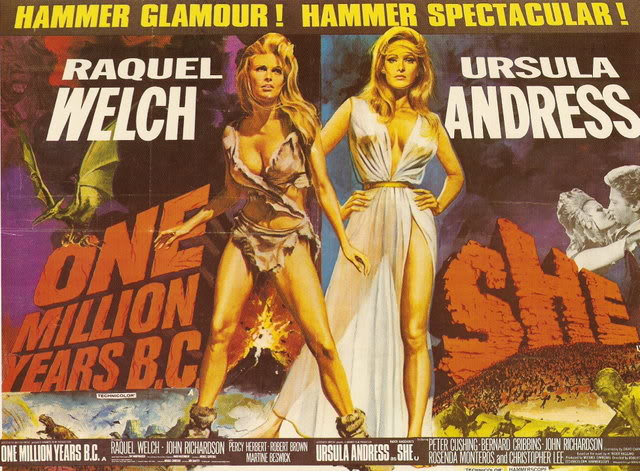 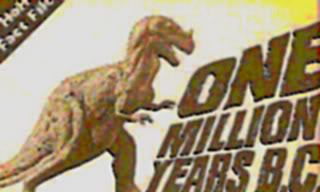 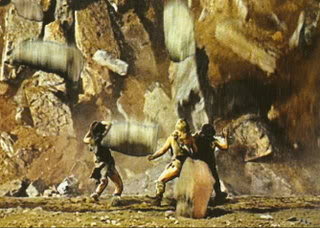 SOME DINO FACTS: the stark landscape here, almost as memorable as the dinosaurs, is due to location filming at the Canary Islands. Harryhausen admitted he allowed the blown-up lizard & spider footage to add some realism, thinking audiences of the time would see these as more close to reality. The famous pin-up of Raquel Welch played an important part in the plot of The Shawshank Redemption (94); it was the 3rd and final poster hung on the wall of the main character's cell (preceded by Rita Hayworth & Marilyn Monroe). Footage of the cliffs collapsing on cavemen near the end was incorporated into A CLOCKWORK ORANGE (1971). Harryhausen continued with more Allosaurus dinosaur FX in VALLEY OF GWANGI (1969), so he was unable to work on the less-harsh WHEN DINOSAURS RULED THE EARTH, which gave Jim Danforth a chance to show his stuff. Article @MOVIE FANFARE: EVOLUTION of the MovieCaveman
Here's interesting dinosaur footage: 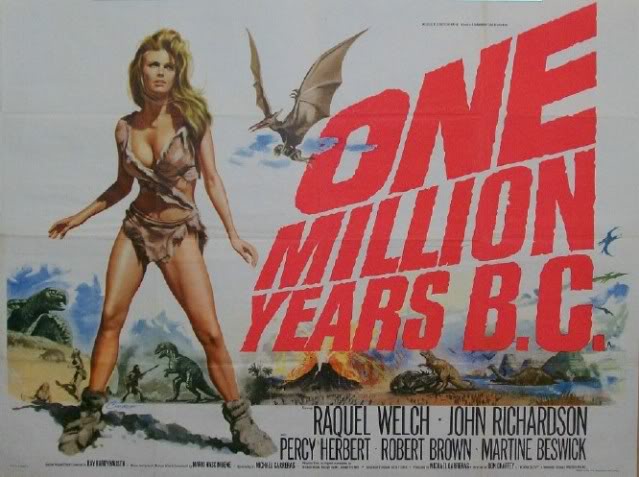