Here we are: the final film in the IT'S ALIVE trilogy... 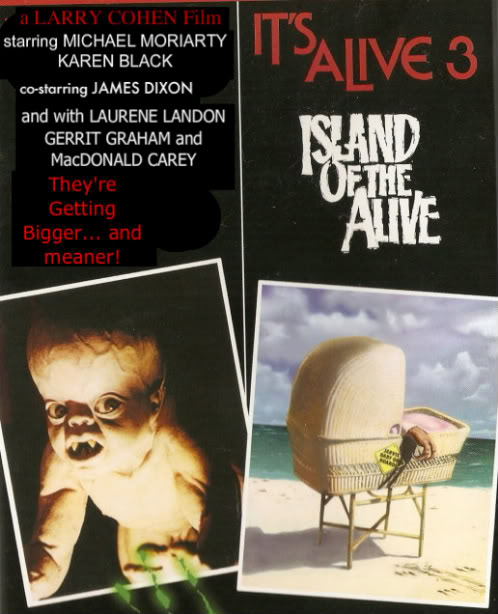 Writer/Director Larry Cohen returned to his most famous film property one more time nearly a decade after the last one (IT LIVES AGAIN-1978) and added a more satirical flavor. As it is, the most effective sequence is the prologue, taking place at night in heavy rain (real rain, btw), as a young woman delivers the latest mutant baby in a taxicab. The cop on the scene realizes what the baby is, telling us that these mutants are well known to the populace by this point. The next scene is in a courtroom, where we're introduced to the 'mutant baby's father in this film' played by Moriarty. He's the main reason this film is more humorous than the previous two. See him in Cohen's Q-the Winged Serpent (1982) to understand the dark comical slant he brings to a role. He overplays it a bit here, almost turning the whole thing into a farce; almost everything is funny to him here - his odd fatherhood has lent him a wry approach to everything.

This does advance on Cohen's theme of society dealing with freakishness in its midst. Five mutant babies exist at this point and a last-minute decision by a sympathetic judge has them placed on a deserted island somewhere in the Caribbean (actually filmed on one of the Hawaiian islands). 4 years later, the judge has died and the babies face extermination. A scientific expedition sets out to the island, including Moriarty and the cop played by Dixon (the only actor to appear in all 3 films). 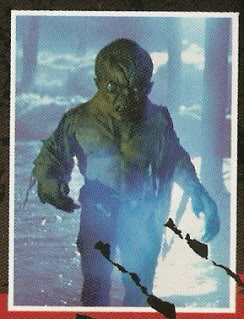 As usual, Cohen defies expectations: you expect the rest of the film to take place on that island, but the party is wiped out very quickly. The mutants mature much more quickly than normal humans and are already adult-sized; they grab the scientists' boat, with only Moriarty left to tag along (he is spared due to his son). Then his son throws him off; Moriarty drifts on the ocean a la Tom Hanks in the later Cast Away and ends up in Cuba

(hello, Fidel!). Next thing you know, he's boating to a Florida town with the help of a couple of new Cuban buddies. I'm not making this up - it sounds half-baked & nonsensical, but also vintage Cohen.

The 3rd act is in the Florida town; it turns out that 2 of the mutants have already spawned their own mutant baby (boy, that is Quick) and are seeking out grandma (Moriarty's ex-wife, played by Karen Black). Gee, a Cohen-styled family reunion!

It's kind of interesting but I think Cohen fell way short in depicting adult versions of the mutants and on where to advance their story. I figured adult versions would be even faster than the baby mutants, but they're sluggish here, possibly weakened by disease? They are resistant to bullets - it takes about a dozen rounds to bring one down - and there are brief confrontations with the local young riff-raff and the police (on a rooftop near the end). 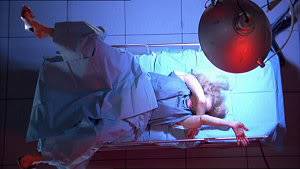 Otherwise, Cohen seems unsure of himself and is even saying that these creatures are an evolutionary dead end (perhaps caused by flawed drugs, it's hinted), undoing all the impetus of the previous films. Talk/info of a filmed remake of the first film surfaced about a year ago. It finally showed up on DVD a while back, having no theatrical release. BoG's Score: 5 out of 10