#15b: A SMALL TALENT FOR WAR
---- written by Alan Brennert, Carter Scholz; Directed by Claudia Weill
This was a very short segment, at just under 8 minutes, but it works wonders with that small amount of air time. As do many others, I feel that it probably would not have worked as well as it did if it were twice as long, dragging out the story. This is science fiction at its most unexpected and you need a good sense of humor or it will be also be at its most unflinchingly stark, at its most depressing. 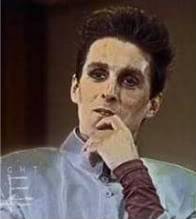 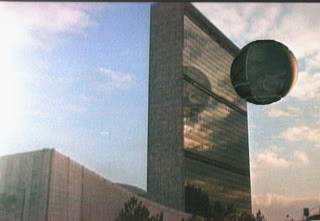 Several famous old sci-fi films are called to mind by this miniature episode, including also the famous old TZ episode, "To Serve Man." But, for me, this turns the famed The Day the Earth Stood Still (1951) on its head. As in that film, Earth is suddenly visited by advanced aliens. The representative of this alien collective (wonderfully played by John Glover, in pale make-up) materializes in the U.N building and informs the leaders there that Earth is in serious trouble. According to this alien, we - Earthlings - are the result of the aliens jump-starting evolution here a couple of million years ago (a 'seeding' program). The aliens have been watching us like far-off stern parents and they have reached the end of their patience. We Earthlings have failed to live up to the standards of the alien civilization with all our petty squabbles and are now to be destroyed (the 'experiment' is over). 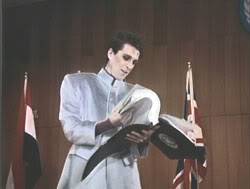 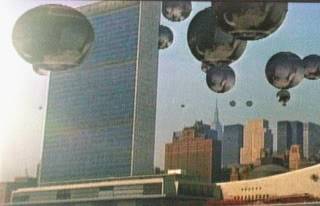 The American ambassador (Peter Michael Goetz) manages to buy the Earth 24 hours as we make one quick all-out effort to convince the aliens that we are worth sparing, with an unprecedented move for world peace. Suffice to say, it's one of the most jaw-dropping examples of dark humor on an unimaginably cosmic scale. Right from the first minute of the segment, we - the entire human race - are put in our place; we are no longer the center of the universe, the most important thing going in this known universe. Now we are just a small part of intelligence in this existence. Then the other shoe drops.

Talk about kicking us when we're down - this gives new meaning to the term 'twist ending.' As the alien himself states, we humans have a delightful grasp of the absurd - at our own expense, some times. It's a kick-in-the-teeth type of ending and stays with you, disposing of any pretensions we may be saddled with. BoG's Score: 9 out of 10