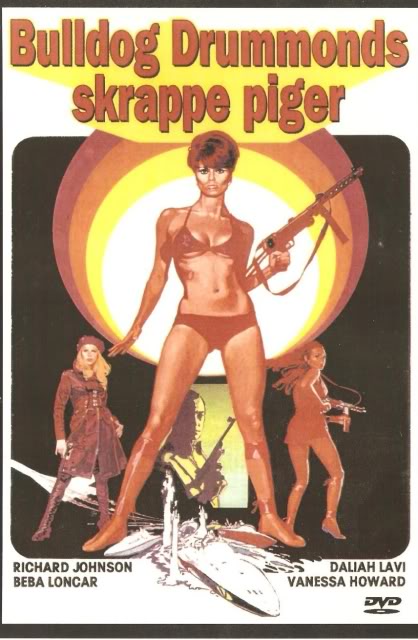 MASTER PLAN: utilize female robots and a sonic weapon. Some do satisfy you and they do mystify you, there's no doubt about it. This follow-up to the James Bond-type thriller Deadlier Than the Male features the return of investigator Hugh Drummond, as played by Richard Johnson, who can pass for Sean Connery's brother from certain angles. It's safe to say, even, that Johnson would have made a pretty good James Bond in the sixties, though Connery is hard to beat. The plot and tone of this one seems to copy certain aspects of the previous Drummond adventure, especially the sight of two smiling femme fatales carrying out their assassinations in a good-natured manner.

Like the previous entry, Drummond is also saddled with a silly sidekick here (it was his younger nephew in the last one), but there's also a cute young female (Sydne Rome) named Flicky who won't go away. As seems to be the doom of many an action spy series in the sixties, the succeeding entries in a film series always succumb to the more banal and camp ingredients, as if the filmmakers have to shy away from making things too serious and make it more fun (Bond survived this, but others did not). Drummond is portrayed in pretty much the same manner as before, but everyone else is caught up in the campy phase of the later sixties. Of course, nothing can surpass the hammy performance of Robert Morley in a brief role. 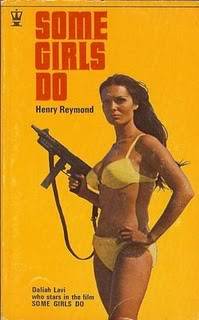 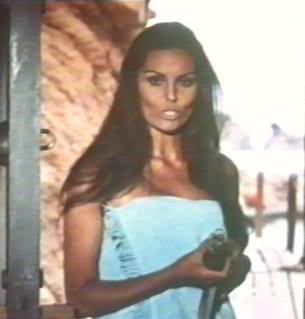 The first half of this escapist thriller sort of plods along, with the highlight being a tepid sequence of Drummond falling from a small airplane/glider with an apparently malfunctioning parachute. A lot of it is standard detective stuff, with the main femme fatale (Daliah Lavi, she of The Silencers and Casino Royale Bond spoofs) offering some intrigue. But then, we and Drummond shift to the island base/lair of the main villain (James Villiers) and his private army, composed mostly of female robots. This abruptly shifts everything into high camp mode and I was never clear on the purpose of these programmed babes (even though Drummond asks this very question at one point and gets some vague answer). I was also never sure whether these were real females with robotic brains or just plain robots; in one scene, the head of one of these females catches fire and there's no sign of damage after the flame is extinguished. Eh? 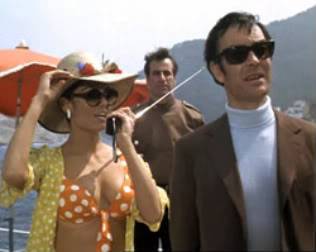 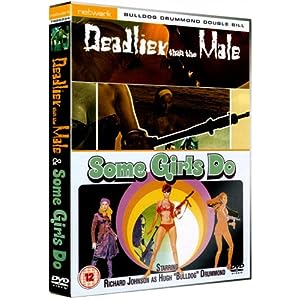 Still, it's kind of entertaining, in that lopsided fashion, and Johnson as the maverick agent is still very good in the role. The last half reminded me of the 'Flint' duo of Bond spoofs, especially In Like Flint. There's a bit of a twist at the climax, but it's fairly meaningless and arbitrary. And, the title song, also sung at the end, is terrific, outdoing the previous entry. Johnson as Drummond would not return, though there was a spoof of a spoof, "Bullshot," in 1982 or '83. BoG's Score: Hero:8 Villain:6 Femme Fatales:7 Henchmen:5 Fights:6 Stunts/Chases:5 Gadgets:5 Auto:6 Locations:6 Pace:6 overall:6