Infestation aired on the Syfy Channel on a Saturday, 8/8/09: 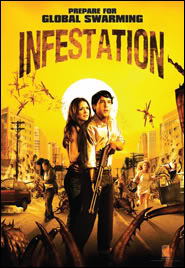 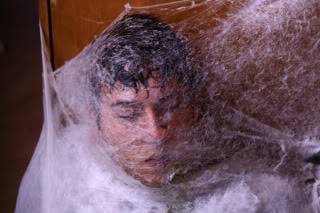 Many have commented about the farce that the 'new' Syfy Channel has become but there was one bright spot. The channel usually airs a new sci-fi made-for-TV film on Saturday evenings; mostly, these are the usual crap. This one, however, was a step in a better direction. It was written and directed by Kyle Rankin, who got his own step up directing one of those 'Project Greenlight' movies (the 2nd one, The Battle of Shaker Heights, starring then-newcomer Shia LeBouf).

In the plot, the main character, a goofy young office worker, is in the process of getting fired by his female boss when a strange noise knocks him out; it's not just him, though - everyone in the city also konks out. The young man wakes up to find himself almost cocooned inside a spider-like web, like everyone else. It swiftly becomes apparent that the city has been invaded by giant bugs. Some of these crawl along the ground, but the more dangerous ones fly. The young guy sort of tries to lead a small group, including his boss's daughter, to safety (the guy's father, played by a late-appearing Ray Wise, is an ex-military man, with his own shelter). 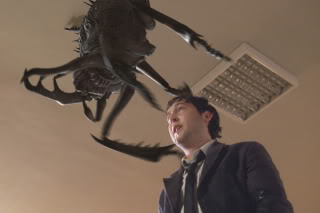 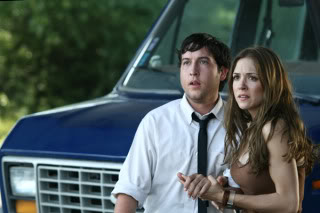 This isn't anything spectacular, but I found it to be inventive, with some surprises, unexpected plot turns and a good pace. There's also a streak of dark humor running through it - think Tremors or Eight Legged Freaks. It may not be everyone's cup of tea - some may not get the joke or think it's a bit too cutesy, but I thought it struck the right cord, with decent acting.

Others also may not like the unexplained portions of the story - we never find out exactly where these bugs came from (just hints, as in when the nest is revealed), but I also got the impression this is like the 1st part of a trilogy or something - and more answers may be forthcoming in a sequel (s). Also, you may or may not like the ending - the very last few seconds are not the typical way to end a movie. BoG's Score: 7 out of 10. Click here for the official website: http://www.iconmovies.net/infestation/

On the next Saturday, SyFy aired the next sci-fi film in its grab-bag, The Terminators, which sounds like it's a rip-off of the Terminator film series; it was - a bad one, so Infestation may be kind of a one-of-a-kind effort, intended for theatrical release and standing to the side of the rest of SyFy offerings. Here's more info on Infestation: http://www.moviesonline.ca/film7329.htm
where you might be able to watch it on-line or at least the trailer; there is a DVD release.