episode #43 - One of Our Running Backs is Missing

episode #43 - One of Our Running Backs is Missing

This one was for all the football fans. Steve Austin counts among his friends pro footballer Larry Bronco (played by real life football great Larry Csonka); they played football together in high school. As it happens, another footballer, Bob LaPort (played by another real life football great, Dick Butkus), about to be forcibly retired, has decided to be sore  & nasty about it. Helped by his criminal brother and a bunch of big thugs (also played by real pro footballers), he kidnaps Bronco in a plan to keep him on ice during the latest game; the kidnappers will make their money betting heavily against Bronco's team. Austin finds them but is also captured; at this point, it looks like the two will be killed. 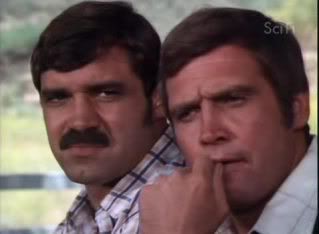 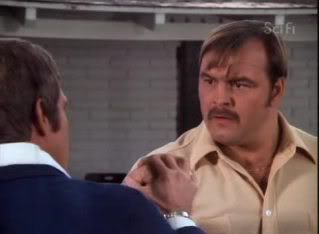 Austin's escape plan ultimately hinges on using the game of football against the bad guys and manipulating LaPort's prideful, blowhard attitude. He goads him into a football challenge; it appears that Austin & Bronco are thoroughly outmatched, of course, 2 against 4 (then 5, then 6), but the villains don't know about Austin's bionics (Bronco begins to, though). This sounds stupid but it's a lot of fun. Csonka was surprisingly OK as an actor - not awful - and Butkus hams it up fine as the bitter footballer-gone-bad. Even more, Csonka's real life wife, Pamela Csonka, gets into the act, playing Bronco's wife. All the bad guys are colorful, even if they do come off as buffoons towards the end. This is one of those episodes still very clear in my head 35 years later. BoG's Score: 7 out of 10
Bionic Trivia: other members of the 'bad' football team here are played by Mike Henry, who already had a career in movies in the sixties as Tarzan, and Carl Weathers in an early role - he went on to the Rocky films as Apollo Creed. This was the only directing job for Lee Majors.