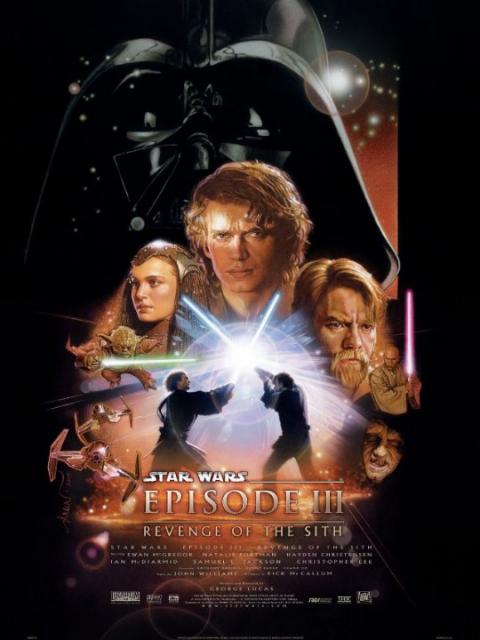 By virtue of its story and conclusive nature, this 3rd prequel has an edge over its predecessors (The Phantom Menace & Attack of the Clones); it's definitely darker and more visceral, but it's also simply more exciting because here we see many of the events that we've been waiting for, some of which have this legendary feel about them, that rare unveiling of historical events which are the stuff of fantasy. It takes place about 3 years after Attack of the Clones; the Clone Wars are coming to an end, signified by a spectacular space battle in which a now-experienced Anakin Skywalker (Hayden Christensen, reprising) shows us that he's the best pilot there is and that he's not that bad of a Jedi Knight either - in short order, the threat of Count Dooku/Darth Tyranus (Christopher Lee) is cut down during the apparent rescue of Chancellor Palpatine (Ian McDiarmid). Unknown to Obi-Wan Kenobi (Ewan McGregor), who was knocked unconscious, Anakin kills Tyranus at the urging of Palpatine, even though it didn't seem necessary.

Palpatine continues to be, as in the previous two films, the snake in the grass, the viper in the dark - he's a slippery, slithering evil which has managed to remain hidden in plain sight even among the supposedly perceptive Jedi Masters (notably Yoda & Mace Windu, again played by Frank Oz and Samuel L. Jackson). But, as we expected, here he begins to drop the facade, as if impatient with all the demeaning deception.  He tells Anakin a tale of his origins, under the guise of a parable, further tempting him about the possibilities of cheating death. Anakin has become more neurotic, almost deranged at the thought of Amidala (Natalie Portman) dying at childbirth after she tells him that she's pregnant. Palpatine then finally reveals himself to Anakin, confident that the young Jedi's dissatisfaction with the Jedi Council will help spur him to the other side, the dark side. Anakin does do the right thing, hesitantly reporting the revelation to Windu. And this leads to the key confrontation scene when Windu brings three Jedis with him to arrest Palpatine. A poster at IMDb does a better job of describing what follows than I could:

Cryogenic wrote:The sequence in question is defined by a kabuki-like excess, and depending on one's predilection, a viewer can either find that exhilarating or grating as hell. I'm more in the former camp, personally.

My heart was in my mouth when I first saw this play out on a big screen, and for me, it remains a visually -- and musically -- enthralling action sequence nine years on. I like how Palpatine is playing it as a bit of a schlump, and just going for broke -- his way -- as if he had all the time and all the power in the universe. For this fan, it's riveting to see him snarling, executing those goofy flips and spins, and generally making a creative meal of his attack, as if mocking the Jedi arts and showing who the TRUE master of the Force really is. His rancid delirium is powerfully contrasted with Windu's calm, unbreakable demeanor, and that pin against the wall, with Mace bearing down on Palpatine with a fierce, hateful look in his eyes, just before the scene briefly cuts away, is one of my favorite moments in the entire movie.

Also, in terms of the way the sequence is cut, this office-space duel is lent a rough-n-ready quality more reminiscent of a duel in the original trilogy, further adding to its charm. What was previously an environment of strained deliberation, and then, seduction, is suddenly transformed into a primal dance chamber, with jagged, violent lashings of reckless, rabid, abstract excess. The thrill of Star Wars is largely contained within these exotic, dizzying contrasts, and in the obvious delight with which Lucas stages and assembles his sprawling story's various action interludes. The music, too, is a perfect match for the syncopated, messy choreography and cutting, with frenzied horns in a striking attack/decay modality, delivering jabs and parries to match those occurring on-screen from the trilogy's arch, snake-like villain and master manipulator. This is the moment that Palpatine -- and the viewer -- has been waiting for. And, for this fan, it delivers. 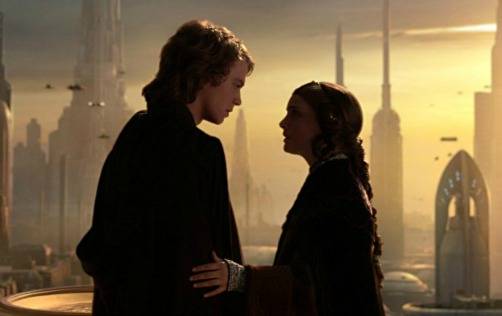 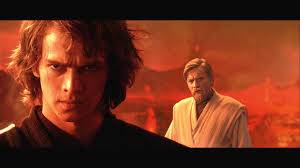 In a sense, this film's events are almost too grim, but there doesn't appear to be any other way to depict them, except that the abruptness of Anakin's more ruthless actions are a function of a film's limited running time. In quick order, Anakin graduates from agonizing over aiding Palpatine (a.k.a. Darth Sidious) in Windu's death to mercilessly killing children in the Jedi Temple. Perhaps this was the only way to assure that only a future Luke Skywalker would be around as a young Jedi warrior but I would have preferred that Sidious did the dirty deed himself - that I could believe. Sidious also attains his hideous appearance immediately during his battle with Windu, something I thought would be a gradual thing with his use of the Force's dark side. Likewise, he comes up with Anakin's Sith name, Darth Vader, on the spur of the moment. Curiously, I was more disturbed by the betrayal directed at all the various Jedi Knights - most are stabbed in the back by the clone troopers - even though they barely registered as characters. I think this large scale assassination plot, perhaps Sidious' most damaging strategy, was more sinister due to the troopers' roles as allies in this and the previous film. But, that's the problem with clones, I take it - no real free will?  The film is a study of excess, but most of it is demanded by the expectations of the story - didn't everyone expect an ultimate duel between Yoda & the new Emperor, even if it could only end in a convenient stalemate?

The one place where Lucas still went overboard is with Kenobi's and Anakin's duel - at one point, the two are on floating pieces of debris on a lava flow; Jedi Knights or not, such heat would be debilitating for humanoids, but they behave as if they're floating on water and much of the sequence feels like a video game. Anakin's excesses also continue - after his various murders, he also tries to execute Amidala; it's as if Lucas wanted to pile this on the young Jedi/now gratuitous mad killer so that we don't feel too much pity for him when he does burn for his misdeeds. But, I think Lucas overplayed his hand on the entire sequence and that this legendary duel and denouement could have been a bit more elegant.  Christensen is actually a little better here than in Attack of the Clones; that's not saying much, but he is older and looks more imposing physically. McGregor too had grown into his role. Portman, who participated in some of the action in the previous chapter, is given less to do here, but she is genuinely touching in her final scenes. McDiarmid hams it up in his later scenes as the diabolical, cackling Sidious but his are the scenes you remember. BoG's Score: 7 out of 10

Trivia of the Sith: the last scene of this film, on Tatooine and with the newborn Luke, was actually the earliest filmed, during shooting of the previous film; it was meant to recall the famous scene of Luke 20 years later gazing at the double sunset in Star Wars Episode IV (77); this 3rd episode is the only Star Wars film which is rated PG-13 (all the others were PG). This was the highest grossing film domestically of 2005, at $380 million; in fact, no other film that year crossed the $300 million mark; though it surpassed the $302 million of Attack of the Clones (2002), it didn't reach the total of The Phantom Menace (1999) - $431 million.