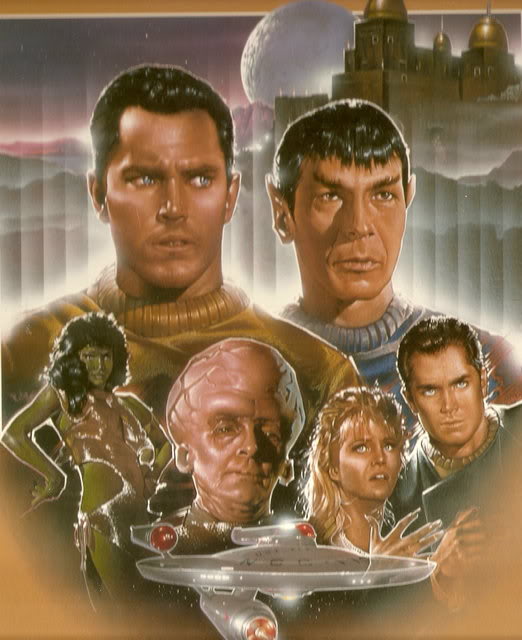 This one is technically before the first season -  an unofficial episode which was completed
a year before the official pilot Where No Man Has Gone Before:
THE CAGE (pre-season; episode #1)
Directed by Robert Butler / writer: Gene Roddenberry 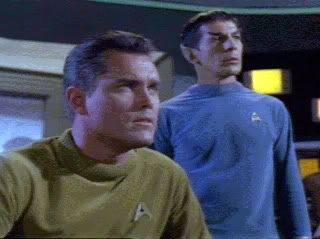 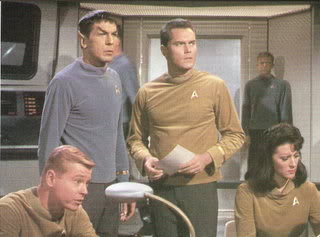 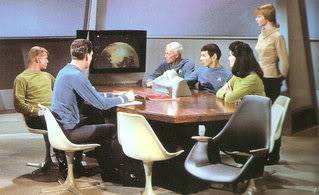 Before Scotty and Sulu; before Dr.McCoy; before even Capt. Kirk, Spock (Leonard Nimoy) was under command of Capt. Pike (Jeffrey Hunter) in the familiar Enterprise (though with a crew of only 203 personnel). The genesis of this original version of a proto-Federation from Roddenberry can be traced back to the spectacular sf film of about 8 years earlier, Forbidden Planet. As in that film, it is  established in this episode that some kind of space fleet exists in mankind's future, on patrol or a Star Trek or just exploring (mostly exploring in Gene Roddenberry's vision). There was a commander Adams in the earlier film, which Roddenberry was probably familiar with and planned to emulate; Roddenberry first scripted a Capt. April; when the pilot for a new TV show was finally filmed in late 1964, he settled on a Capt. Pike, here a more morose and disenchanted version of Capt. Kirk, tired of the heavy responsibilities associated with such a ship's captaincy. 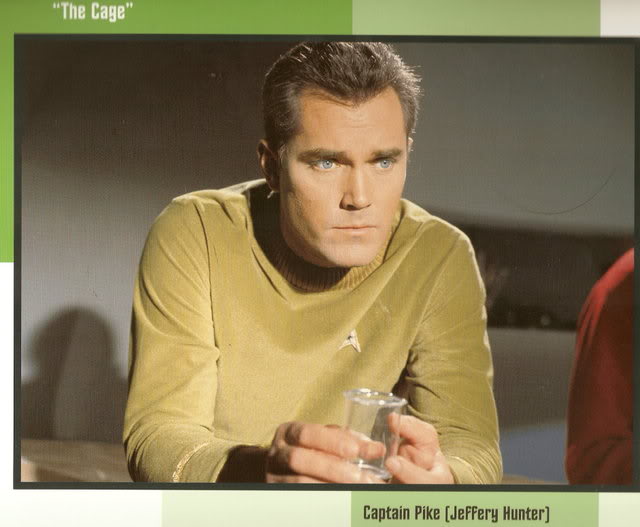 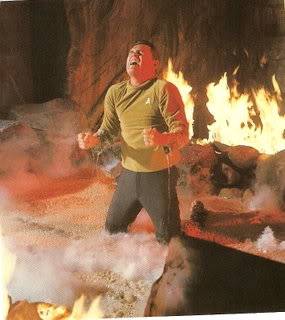 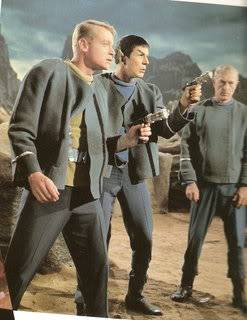 To fully grasp the Trek history which evolved afterward, one should know that Captain April was later established as the first captain of the starship Enterprise. Capt. Pike was the 2nd captain.
Capt. Kirk was the 3rd. 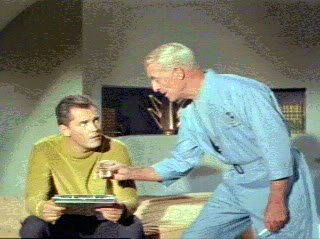 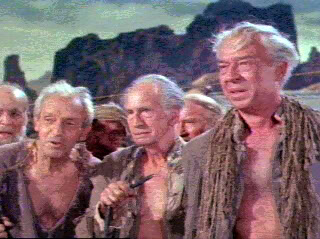 This pilot episode, filmed close to the standards of a feature film, takes on unexpected connotations from the perspective of current times. Since it was later established that this episode took place about 13 years prior to the events of the regular Star Trek series, one gets the impression of a long line of captains and ship's doctors, all debating, in succession, the values and principles of crew duties and regulations after particularly trying missions, as in an early scene here. 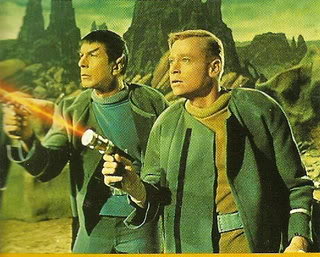 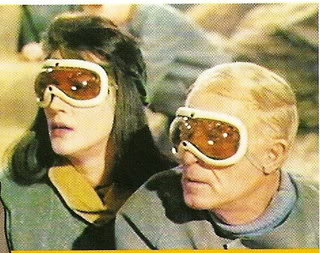 In a clever scripting detail, we sort of come into the middle of a story as the episode begins: the crew just completed some mission or adventure on one of the Rigel planets; there were fatalities, everyone's tired. So the sense is that missions in space have been going on for quite some time. Now, the latest adventure - a bogus distress call and pretty soon the captain, Chris Pike, is held captive by a race of big-headed aliens with extraordinary powers of illusion. It's amazing that the entire holodeck concept on the TNG series, over 20 years later, is given an early run-through here. As mentioned, the production values are close to those of a feature film (the budget was about 3 times that of the regular series episodes) - this is especially evident after the restored version of this pilot became available. Pike transits, thanks to such illusionary abilities, from one exotic locale to the next, never knowing what to expect. 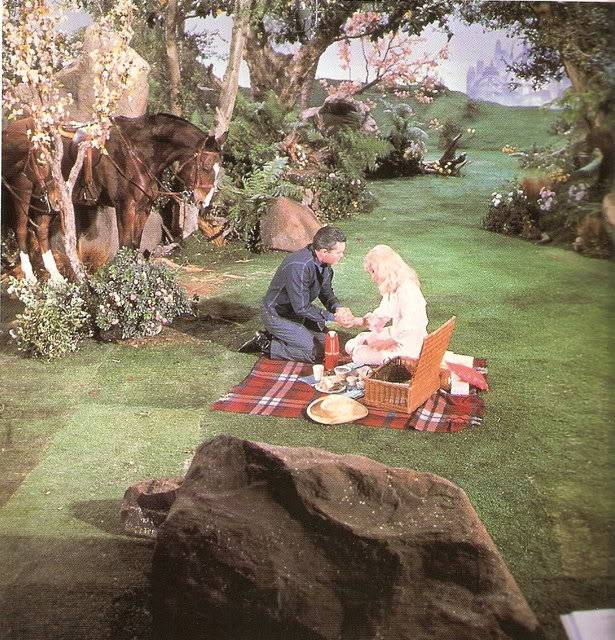 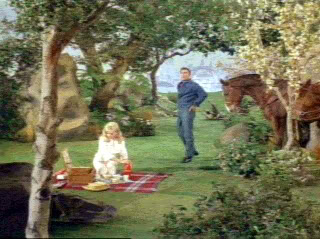 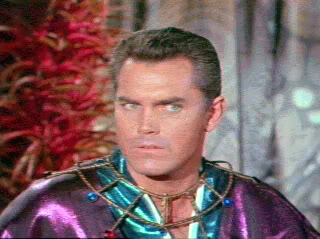 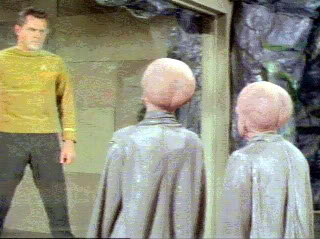 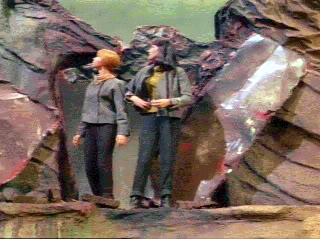 Jeffrey Hunter was pretty good as the captain, playing a bit closer to the vest than Shatner, some might say withdrawn, but with obvious leadership charisma. Nimoy, in this early version of Spock, lets loose a grin at least once, definitely a younger, less polished interpretation of his well-known character. I was a bit impressed by Majel Barrett, who would've been 2nd-in-command had this show continued as is here. Back in the sixties, the powers-that-be could not accept a female of such high rank, but she pulled it off. They demoted her to lovestruck nurse, a different character, by the time the regular show began. John Hoyt seemed to offer merely a 'bartender-as-doctor' personality, with none of the crackle that  De Kelley brought to the role. 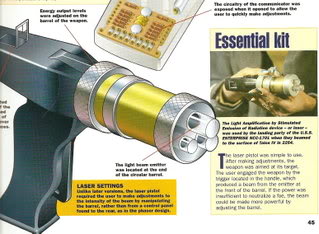 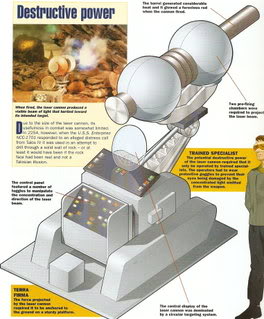 The rest of the cast as the crew in this early version of Star Trek were quite bland, including an early role for Adam Roarke, later a fixture in some biker films and Dirty Mary,Crazy Larry (1974). Guest star Susan Oliver was more interesting as the fellow prisoner engaged in futuristic mating rituals with Pike - her Orion slave girl illusion was quite risqué for its time, but that was Roddenberry for you. The entire episode proved to be a highly cerebral, involved effort, too complex for the masses of that time in the view of decision-makers, and maybe even too serious in approach. The story was very intelligent but the characters were far less exciting than the later ones on the actual series. BoG's Score: 8 out of 10

Extra Trek Trivia: Unexpectedly, a sequel to this pilot materialized during the course of the regular series, only halfway through the first season - The Menagerie parts 1 & 2 - where-in we learned the future fate of Chris Pike - not a very pleasant prospect, as it turned out. Roddenberry incorporated most of the footage from THE CAGE into that 2-part episode. After this pilot, THE CAGE, was rejected by the bosses, Roddenberry presented Where No Man Has Gone Before, starring William Shatner as Capt. Kirk. The rest is TV sci-fi history. The crew used laser guns here, rather than the later phasers. Click on the following link for an article on a possible influence on THE CAGE: Shaver SCi-Fi. 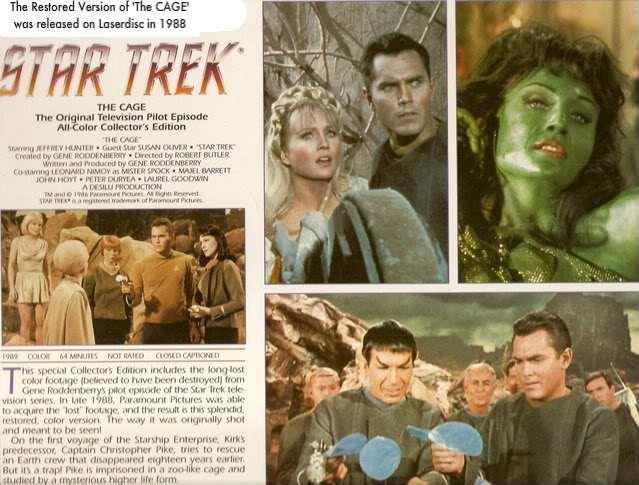 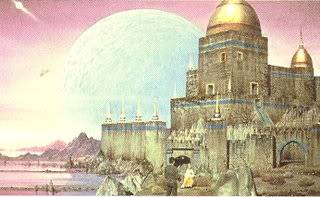 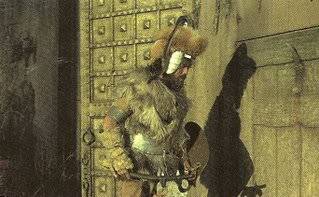 The cast of THE CAGE 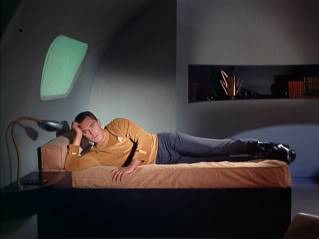 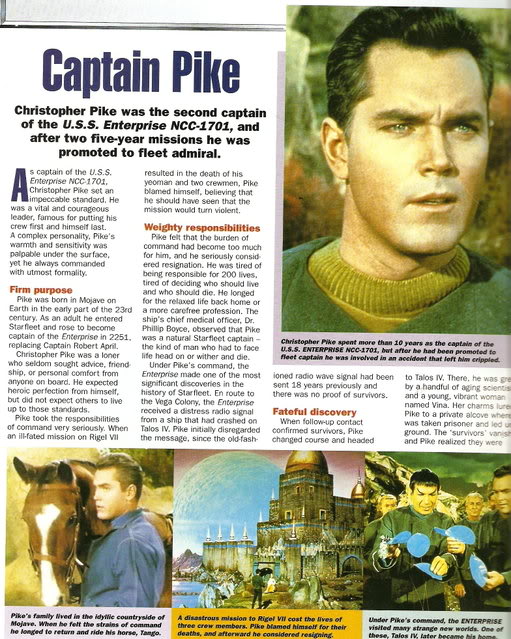 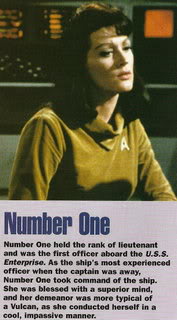 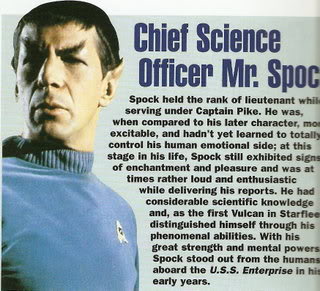 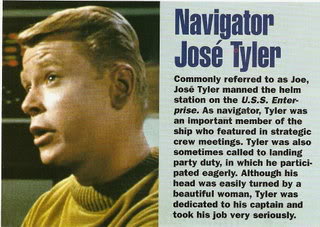 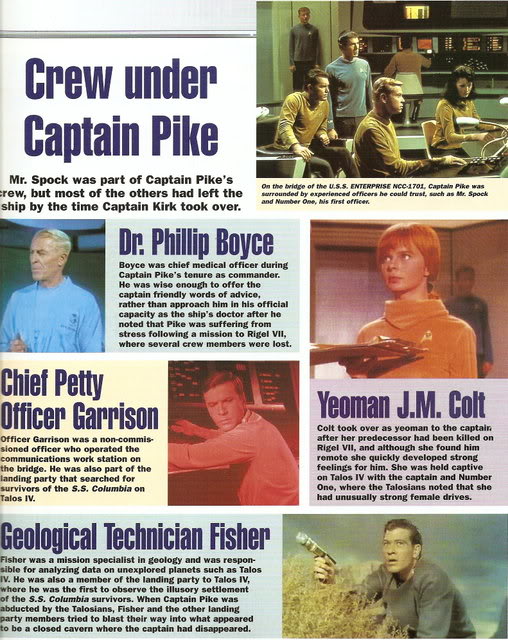 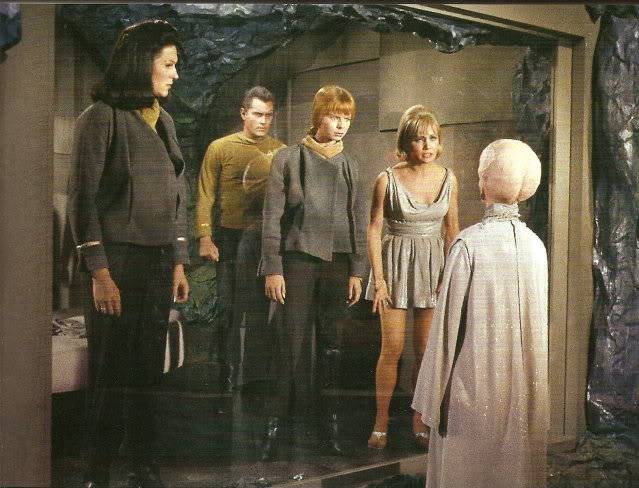 Majel Barrett on left as no.1

on right, Susan Oliver as Vina , Meg Wylie as the Keeper