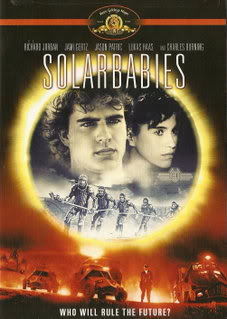 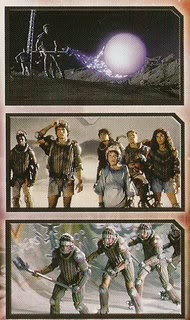 The film takes place in some future after Earth has undergone an ecological disaster. Specifically, there isn't much water left; no rain; so, most of the planet is a desert. Sort of like A Boy and His Dog (1975)? No, no. Sort of like a boy, a girl and some more boys. This is about kids and is made for kids. Unless you're in a certain youthful age bracket, you probably won't find this too interesting.

In the plot, a bunch of kids are held at some training center at the edge of a wasteland. There are a lotta kids. They are all being prepared to eventually serve a corporation which apparently runs everything. Charles Durning plays the chubby warden, yet probably the most sympathetic adult. Richard Jordan is top-billed as the main villain, a corporate enforcer who resembles a futuristic gestapo agent; think his 'Francis' character in Logan's Run, a decade older and meaner.

One group of kids are dubbed Solarbabies because they've formed a rollerskating team. Uh, yep. They're played by some of the 2nd-rank brat-pack juvenile stars of the eighties: Jason Patric (the sort-of leader), Jami Gertz, James LeGros, Peter DeLuise and the youngest, little Lukas Haas. This last one finds a floating energy globule which turns out to be an alien visitor.

Oh, there's also Adrian Pasdar, who has a rapport with an owl. To make a long story short, they end up escaping their training prison and heading out into the wilderness. I found it amusing that, even in such a desert wilderness, these kids always find terrain on which they can rollerskate. How else can they stay ahead of the pursuers? Rollerskating seems to be a theme in this movie; I couldn't see the point of this theme - I guess it has something to do with the eighties; rollerskating was really popular then, right?

The climactic action gets surprisingly violent - surprising in that most of this is harmless piffle. It rips off The Road Warrior films and any post-holocaust scenarios, as well as any sci-fi films which feature violent smart robots for the final scenes. Sarah Douglas (Ursa from Superman II) also pops up as an evil scientist type. Jason Patric got into serious roles soon after this, but his next was The Lost Boys (1987). Pasdar next starred in Near Dark (1987). To me, it was most interesting just to catch some of these actors so early in their careers. BoG's Score: 5 out of 10

is a registered trademark of DivX, Inc. http://labs.divx.com/WebPlayer